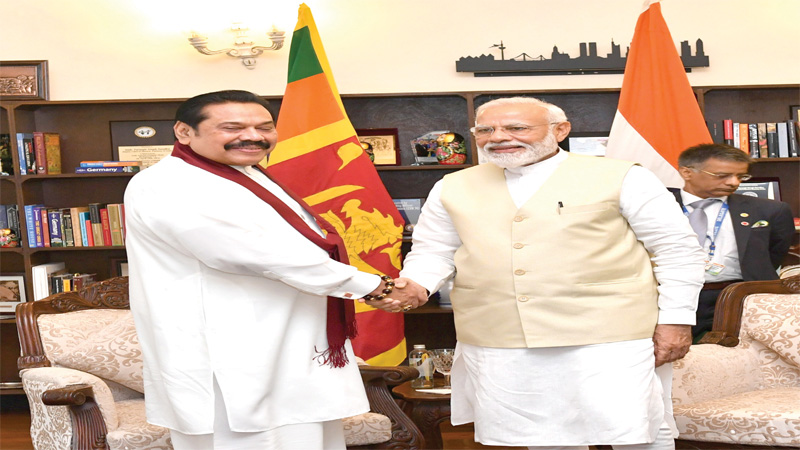 Prime Minister Shri Narendra Modi visited Sri Lanka on June 9. It was his first foreign trip after re-election and paid homage to those died at St Anthony’s Church Easter Sunday attack. Before reaching Sri Lanka he visited Maldives on June 8.
Sri Lanka’s Prime Minister Ranil Wickremesinghe welcomed Shri Modi at the Bandaranaike International Airport. Media wrote that the prime minister’s visit to St Anthony’s Shrine was not only a mark of solidarity but also an attempt to pacify the nervousness witnessed in Sri Lanka. Shri Modi’s visit was also aimed at aiming diplomatic ties in order to curb terrorism. Shri Modi paid tributes to the victims of the deadly terror strikes at the church and said the “cowardly acts of terror cannot defeat the spirit of Sri Lanka“.

“I am confident Sri Lanka will rise again. Cowardly acts of terror cannot defeat the spirit of Sri Lanka. India stands in solidarity with the people of Sri Lanka,” said Shri Modi.

Shri Modi was the first foreign leader to visit Sri Lanka after the deadly Easter terror attacks in April. His visit is considered as a sign of India’s affirmation of solidarity with Sri Lanka in the aftermath of the attacks.

“President Sirisena and I agreed that terrorism is a joint threat that needs collective and focussed action. Reiterated India’s commitment to partner with Sri Lanka for a shared, secure and prosperous future,” Shri Modi tweeted after his talks with President Sirisena.