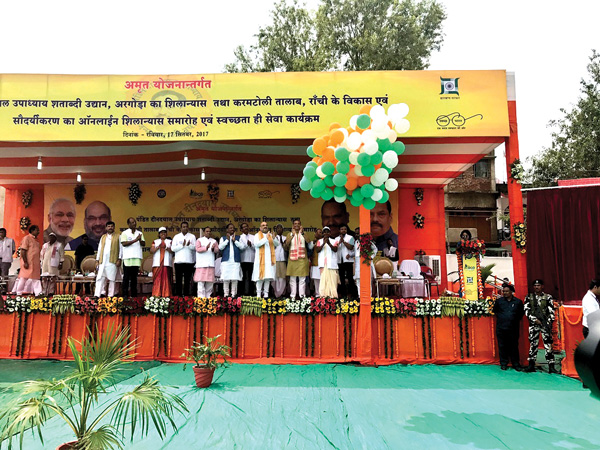 BJP National President Shri Amit Shah on 17 September participated in ‘Swachhata Karyakram’ at Argora, Ranchi (Jharkhand) organized on the occasion of Prime Minister Shri Narendra Modi’s birthday which is being celebrated as ‘Seva Divas’ by the party. He also addressed a public meeting on this occasion.

Shri Shah said that the Prime Minister Shri Narendra Modi does not celebrate his birthdays but given the fact that his entire life has been devoted to the service of this nation, the BJP has decided to celebrate his birthday as ‘Seva Divas’ across the country. The BJP president said that on behalf of crores of party workers, he prayed the almighty to bless Shri Modi with health and long life so that he can successfully accomplish all the public programmes he has undertaken and take them to the people at the lowest ladder of our society. The BJP workers and the people of this country have organized several programmes on the occasion and various service projects have also been undertaken. There can be no better way than this to celebrate Prime Minister Shri Narendra Modi’s birthday, he said. 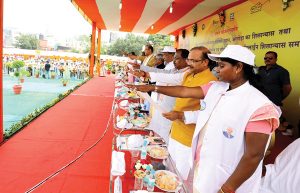 Shri Narendra Modi initiated cleanliness drive when he was Gujarat Chief minister and after taking oath as the Prime Minister, he had launched the cleanliness drive across the country. Taking a dig at the opposition for raising questions about the efficacy of cleanliness drive, the BJP president said that making a cleanliness conscious society is a long process but there is a visible change in the society today and that even a child stops those who throw litter on the streets instead of a dustbin. Those who rose to power in the successive years after independence, never bothered about cleanliness, Shri Shah said. Unless ordinary citizens come forward to tackle the problems faced by the society, there can be no lasting solution, because Government alone cannot solve the problems, Shri Shah emphasized.