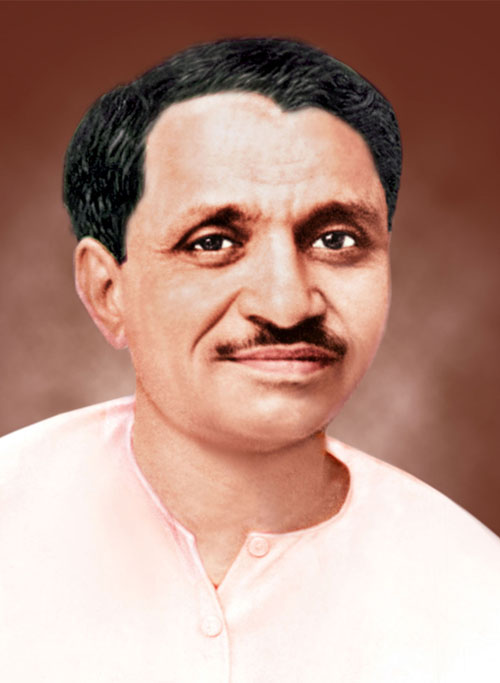 There may be persons who call themselves followers of Deendayalji but a person who has watched him from close quarters would know that he did not make any followers. He had only co-workers. He created innumerable co-workers.

IN 1952, when the all India session of the Jan Sangh was held at Kanpur,though there were many others, the choice fell upon Deendayal Upadhyaya. He was chosen the General Secretary of the Party. The reason for this is not that he was a very competent politician. In fact, he was by much different from the ordinary run of politicians. Who marked him out from others for being chosen the General Secretary were the qualities he acquired as a swayamserak and as a pracharak, from 1938 to 1951 which made him eminently successful as an organiser. For a successful worker of the RSS, the quality of collecting and keeping people toge-ther, known as the quality of Lok Sangrah is of utmost importance. Without this quality, one cannot be a successful worker of Sangh. For one to have this quality of Lok Sangrah special type of life style is needed. He must be utterly devoid of egoism. Life should be simple and straightforward; his conduct should be in consonance with his profession. A person in whom there is no harmony bet-ween his conduct and his profession cannot do Lok Sangrah. After collecting people, if their life is to be transformed in a particular direction, if they are to be imbued with “the qualities of dedication for the nation and the society, this can be done only by personal example. Lok Sangrah is not possible merely by virtue of oratory, intellectuality or scholasticism.These do not help in building up men.

Whether as a Sangh pracharak or the General Secretary of the Jan Sangh, Deen-dayal Upadhyaya could inspire his workers, not because he was a great intellectual, not because he spoke with authority on different aspects of politics, but because he could fully identify himself with the joys and sufferings of his co-workers. He used to be so intimate with them, that they never took him to be a great leader and General Secretary of a great Party. They could meet him freely, even at midnight, without fixing up prior appointment. He used to converse with them in a heart-to heart manner, as between colleagues. Thus, he used to exert great influence on the workers. Through his life he taught that Sangh work is essentially a work of intimate personal contact.

It was these qualities that Deendayal Upadhyaya acquired as a pracharak of the Sangh that stood him in good stead in establishing the Jan Sangh. Dr Shyama Prasad Mookerjee passed away, or was murdered, one year after the founding of the Jan Sangh. Therefore, the task of making Jan Sangh an all India political party devolved on the shoulders of this seemingly ordinary person. Deendayal. To set up any organisation, it requires some effort, some qualities. But establishment of an all India political party isotopes’nely difficult task. This difficult task was ably shouldered by Deendayal Upadhyaya from the year 1952 to 1968.

No Followers: Only Colleagues

There may be persons who call themselves followers of Deendayalji but a person who has watched him from close quarters would know that he did not make any followers. He had only co-workers. He created innumerable co-workers. And it was with their cooperation that he set up the countrywide organisation of the its Sangh. But even while setting up such an organisation he was particularly keen about developing the qualities required for Lok Sangrah. Hc never desired anything for himself, neither name, nor fame nor power nor pelf. His was a life totally dedicated to the nation and the society. Because of that, he could build up such a huge organization. Had there been in him the slightest desire for name or fame or power, if he had any son of selfish ambition. Jan Sangh, after the demise of Shyamaprasad Mookerjee would have met the same fate as the Janata Party. Deendayal Upadhyaya built up a grand political party through the medium of excellent co-workers. So, whether as a Sangh Pracharak or its Sangh General Secretary or its President, the secret of Deendayal Upadhyaya’s success was not in his oratory, in his intelligence nor in his ability to expound any thesis, but in the exemplary life he lived. There are people who can deliver beautiful lectures on the problem of poverty, quoting facts and figures but that can hardly influence any individual life. What transform lives is the great agony one feels about the condition of the poor and the downtrodden. What is the inspiration behind a dedicated life, intelligence or heart? In our country, there is no dearth of intelligent people, those who can deliver faultless speeches on the problem of poverty, but they do not feel the pinch themselves. Their sleep is not disturbed even for a night ‘on account of the thought of the misery of their people. How many ‘ of these intelligent people are prepared to effect some cut in their personal standard of life so as to contribute a little to alleviate the sufferings of the poor? Has many of them are prepared to devote some time for their service? Do the thoughts they express, in anyway reflect in their conduct? True inspiration comes from the heart. Only those people are inspired to act, who experience the agony of the people’s suffering in their heart. The intelligent only talk; they do not live a dedicated life. Deendayal Upadhyaya belonged to the former category.

Had He Been Alive Today!

Today the Jan Sangh, which Deendayal built up brick by brick is no more. One is naturally tempted to ask as to that he would have done, had he been alive today. It is difficult to answer the question. Under the present political situation, probably he would have taken to political sanyas. In fact, at no time did he have any liking for politics. He entered politics because of circumstances. After the formation of the Janata Party, seeing the state of affairs, he would have kept away from all positions of power. Not only that, he would have tried to come out of it and return to Sangh. If he had still continued in it, he would definitely have bid goodbye to it the moment questions like dual loyalty were raised, saying ‘1 am basically a swayamsevak: my source of inspiration is the Sangh and whatever I am is the gift of the Sang!’. But if due to pressure of circumstances he still continued in politics, he would not have spent his time in Delhi. He would never have taken interest in the political gymnastics of party leaders. He would have been continuously on the move, keeping constant touch with his innumerable co-workers in the country, placing before them his thought and ideas regarding the people and the situation. Contact with workers, constant contact with people—that is that he always aspired for. He would not have taken part in the type of politics
going on. Slowly he would have built up a worthy political structure, because for him political party was not just an instrument to capture power. Power without principle was not his aim. Keeping away from power, he would have built up a principled party or an organized structure, however small it may have been.

Deendayal Upadhyaya died comparatively young, at the age of 51. Had he been allowed to live he would have maintained the tradition of great men like Mahatma Gandhi and Jayaprakash Narayan. Today when one looks at the country, one feels convinced that it cannot be uplifted through the so-called political leaders. The tradition of rare men like Mahatma Gandhi, Jayaprakash Narayan and Deendayalji would have to be continued. If the country is to rise, then, a new leadership of men who do not aspire for name and fame, who do not care even for the prime ministership of the country will have to be once again thrown up. Men who care only for the nation and the society—only such can bring about the upliftment of the nation. Deendayal Upadhyaya belonged to that line of great men for whom the country was above everything else. Today, the country requires such a leadership. Had Deendayal Upadhyaya been alive, it would have been his endeavour to create men of such devotion and dedication!

(The article was published in ‘Manthan’ magazine in March 1980)