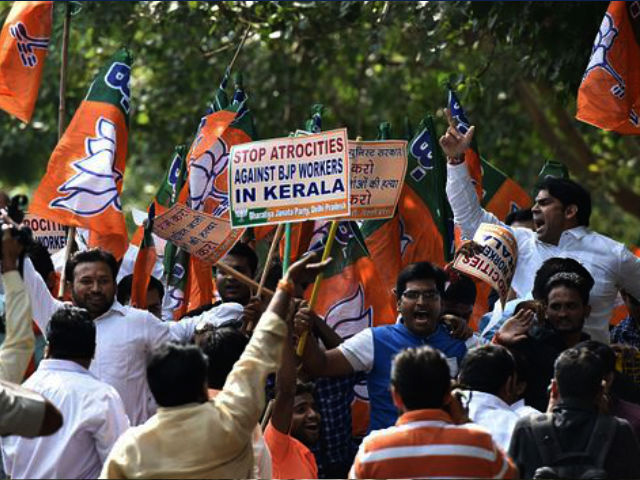 BJP activist Remith hacked to death in Kerala’s Kannur district
Amit Shah condemns the gruesome murder of Party‘s worker
BJP activist Remith was stabbed to death on October 12 ,
allegedly by a group of Marxists in an attack in Pinarayi,
Chief Minister Pinarayi Vijayan’s native village in Kannur district.
Twenty-year-old Remith was stabbed by a CPI(M) worker. BJP called for a state-wide bandh to protest the killing.
According to police Remith, who suffered serious injuries in the attack, succumbed to his injuries on way to the hospital. His father Uthaman was also a victim of political violence. He was killed by CPI(M) workers in 2002.
Kannur has witnessed a series of attacks on BJP-RSS workers in the recent past. In early sixties the RSS started to expand their presence in the Communist bastion. Intolerant communists could tolerate alternate ideology and started violence against BJP & RSS workers. Since then BJP-RSS leaders are being targeted. BJP National President strongly condemned the gruesome murder of the party worker in Kannur district of Kerala. He said “In the continuing culture of political violence unleashed by the CPI (M) cadres, our activist Ramith was hacked to death this morning in Pinarayi village of Kannur district of Kerala. This village happens to be the native village of the chief minister of Kerala, Pinarayi Vijayan.”
The BJP chief also stated that as political parties with varying ideologies, there may be differences in opinion but resorting to violence is an instrument for those who cannot engage in a political debate with rivals. “Kannur has been the epicentre of Marxist violence in Kerala. That such a spiral of violence has been unleashed on people in the native village of the state’s chief minister reflects the true motive of the ruling LDF alliance,” added Shah.
He also stressed that the gravity of the situation can be understood from the fact the victim’s father, Chavassery Uttaman, was also killed in a ghastly political encounter in 2002. Subsequently, his house had been attacked repeatedly and even the mother of Ramith was subjected to a political assault a few months ago, said the BJP chief.
He also claimed that the repeated occurrence of political violence in Kannur district clearly shows that “these are sponsored killings by the marxist cadres with the active patronage of the state chief minister”. 