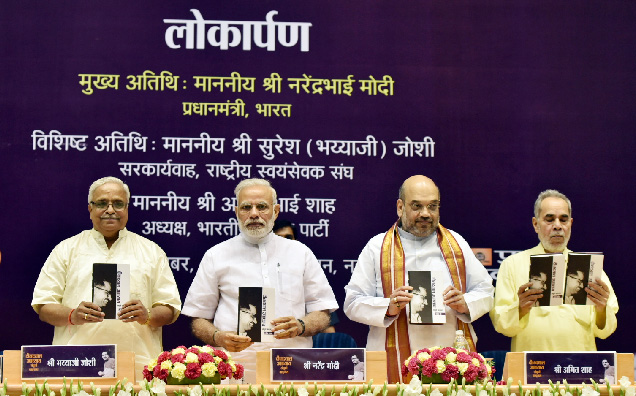 Prime Minister Shri Narendra Modi released ‘The Complete Works of Pt Deendayal Upadhyaya’ at a ceremony organized at Vigyan Bhavan, New Delhi on 09 October 2016, and urged the people to walk on the path shown by the great thinker while discussing Pandit ji’s principles, ideals and different aspects of his life at length. He said that the thought has strength of its own and Pandit ji’s thoughts have been delivered to us in a capsule, for which he thanked everybody heartily. Greeting the people in advance for Vijayadashami and wishing them well, he said that this was a special occasion for the country.

The Prime Minister said that it was not difficult to pen the life, thoughts and achievements of a public figure because information about the personality are available in the public domain, but to do so for a personality who was publicity-shy even as he worked tirelessly for society is rendering yeoman service to the people, for which Shri Modi ji congratulated the team of Shri Mahesh ji and Shri Prabhat ji that put in place The Complete Works. Shri Modi said that these 15 volumes were a confluence of the trinity of his journeys of life, ideology and resolve and this moment of this day was to relish the offering of the trinity.

Shri Modi said that Pt Upadhyaya was an epitome of simplicity who, in a short span and brief political life, traversed the journey of establishing a political party, an ideology and a political system, which helped the BJP transform from being a party in the opposition to one that gave the people an alternative government. This is no mean feat, Shri Modi said, adding that this journey was made possible by the strong organizational foundation laid by Pandit ji.
Shri Modi said that Pt Deendayal Upadhyay had set an example by establishing a party that was organization-based. The journey from the Jana Sangh to the Bharatiya Janata Party is a unique chapter in Indian history, the credit for which goes to Pandit ji, Shri Modi said. The Prime Minister recalled that Shri Shyama Prasad Mukherjee would say that if he had two Deendayals, he could change the face of Indian politics.

The Prime Minister said that the 1960s saw the nation mull over who — rather than what — would succeed Nehru. It was a time, Shri Modi reminisced, when one party dominated the scene from the panchayats to Parliament, and there was no alternative. He said that studying the period between 1962 and ’67 was crucial to understanding Pt Deendayal Upadhyaya. Even Dr Ram Manohar Lohia had recognized, Shri Modi said, that it was only because of the wide scope of Deendayal ji’s vision that parties of various ideologies could come together to offer to the nation an alternative. Pandit ji had another virtue; he insisted on building a cadre base; he built a new type of political worker that did not come from a particular political breed, Shri Modi said. He said that Pandit ji created a cadre base where the worker had independent thoughts, was inspired by nationalism and dedicated to society. Pt Upadhyaya envisaged an army of political workers, Shri Modi said, to pave one’s way to entry into politics. Therefore, Pandit ji strived to build and expand an organization based on ideology and character building of its workers, Shri Modi said.
Shri Modi said that Pandit ji built a cadre where the worker was committed to the organization and the nation was at the centre of his thoughts. Anybody may comparatively analyse the space where we are working together; indeed, analysts must assess the period corresponding to any ruling party, Shri Modi said. The party that Pt Deendayal ji toiled hard to build and the ideology he gave to the nation are the result of a penance that is ready to face any test even today; I say this with all my conviction, the Prime Minister said.

The Prime Minister said that Pandit ji would say, ‘We would accept anything that enhances ourselves in prestige, science and culture. We are neither averse to modernity, nor are we beholden to orthodoxy and archaic traditions.’ He said this was at the root of our thoughts, adding that the BJP comprised people who mould themselves according to the needs of the nation and society; this is why it could traverse the journey between being in opposition to being an alternative for governance enjoying the confidence of 125 crore Indians. He said that Pandit ji presented the views of a gamut from the Vedas to Vivekananda, from Lord Krishna to Mahatma Gandhi, in a modern perspective. Only that economics, politics and sociology can change the fortune of India that is tied to the roots of the nation, Shri Modi said, adding that no country had been able to progress while being detached from its roots.

Shri Modi said that Pandit ji emphasized capacity-building; he used to say that our defence forces must be competent and only then the nation can be powerful. Pt Deendayal Upadhyaya believed, he said, that every entity from the individual citizen to the country must build its competence. He said that the whole world was interdependent today, and it was imperative at this juncture that we built the nation strong on the basis of its essential philosophies; the people of the country must, he said, strive together to achieve this.
The Prime Minister said that the poor were at the centre of Pt Deendayal Upadhyaya’s thought process. Pandit ji believed that the economic model of the nation must be bottom-up, not top-down.
He said that the BJP had decided to observe 2016 as the Year of Welfare for the Poor to realise Pt Deendayal Upadhyaya’s dream.

Therefore, he said, no department of the government can forget that all its decisions, thoughts and programmes must be aimed at improving the lot of the poor. To ensure this, the Prime Minister said, the BJP is observing the centennial year of Pandit ji’s birth anniversary as the Year of Welfare for the Poor.
Shri Modi said that society must develop all kinds of competencies. So that India attains the pinnacle of glory, he said, Pandit ji advocated seven ideals — harmony, diligence, equality, prosperity, knowledge, happiness and peace.
Paying tributes to the great thinker, the Prime Minister said that one should leave no stone unturned to see through the implementation of Pt Deendayal Upadhyaya’s vision and resolved to dedicate one’s life to Mother India.
Deendayalji presented an example of establishing a strong political party based on ideals, organizational strength and nationalism : Amit Shah
Addressing on the occasion BJP National President Shri
Amit Shah expressed his gratitude towards Shri Mahesh
Chandra Sharma ji, Shri Achyutanand Mishra ji, Shri Jawaharlal ji and their team for making The Complete Works.
The BJP president said that the year-long celebrations to commemorate the 100th birth anniversary of Pt Deendayal Upadhyaya were recently inaugurated in Kozhikode (earlier known as Calicut). He said that the BJP decided to observe the whole year as Pt Upadhyaya’s centennial birth anniversary year, adding that the year will also be observed as the Year of Welfare for the Poor. He said that Shri Prabhat ji and his team have done an important job of presenting to the nation the 15-volume Complete Works… He said that it took 15 volumes to compile Pt Deendayal Upadhyaya’s essays, speeches, statements, proposals and opinions on contemporary issues. The Complete Works…will benefit not only BJP workers, but also every public figure working for the nation, in enhancing their personalities, Shri Shah said.
Shri Shah said that the issues that Pt Upadhyaya had highlighted in his era have assumed diabolical proportions in the present times. Stressing the interdependence of human beings and nature, Pandit Ji had seen no conflict between developmental works and conservation of nature; rather, he insisted, a balance could be maintained between the two, Shri Shah reminded the people. He said that global warming, for example, is a problem that confronts us today because Pandit ji’s ideas were not implemented in his time. If the philosophy of Integral Humanism had been pursued in developmental approach of the previous governments, a whole lot of problems that we are confronting today would not have arisen in the first place, Shri Shah said.

He said that Pt Upadhyaya has always been seen as a thinker, philosopher and organization builder, but the world should know that he was a successful politician, too. Shri Shah said that in the 1960s and 1970s, when the Congress was at the peak of its popularity, the Bharatiya Jana Sangh grew continuously, and when Pandit ji became its president in 1967, it was already bigger than several other political parties; not only that, it was also part of coalition governments in several states. Shri Shah said that Prime Minister Shri Narendra Modi ji and Shri Bhaiyyaji Joshi had dedicated The Complete Works of Pt Deendayal Upadhyaya to the nation today, for which the entire team that made the compilation must be congratulated.