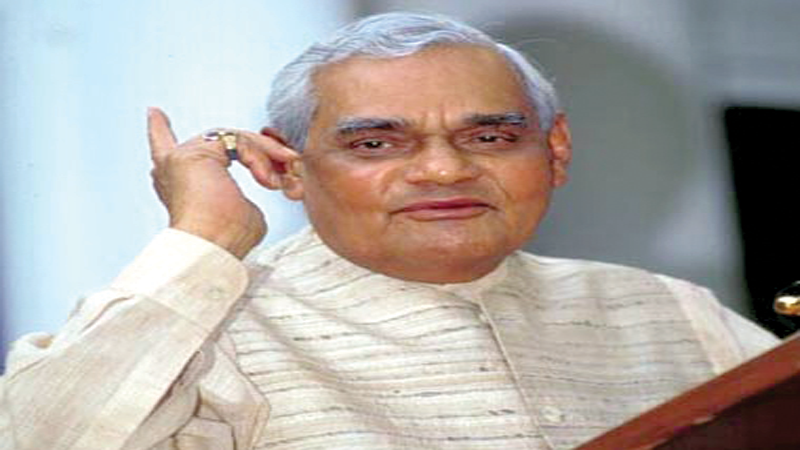 Special series starting from the Punyatithi of Atal ji (16 August)

On 28 May, 1996 India witnessed an epic moment at Lok Sabha in the Parliament and the person behind that moment was the then Prime Minister of India Shri Atal Bihari Vajpayee. Notably, the Bharatiya Janata Party emerged as the single-largest party in the general elections of 1996 with 161 Members. The then President of India Shri Shankar Dayal Sharma invited Atalji to form the government and gave him two weeks time to prove its majority. After 13 days, by not indulging in horse trading, Shri Atal Bihari Vajpayee decided to face the trust vote and he delivered this memorable speech during the ‘Motion of Confidence’ in the Parliament. We are publishing Excerpts of the last part of the historic speech for our esteemed readers :

Recently a function was organised in Bangalore to commemorate the struggle against the emergency, which was called the second struggle for freedom. Shri Deve Gowda was also present there. I have with me the excerpts of his speech, which he made on the occasion, I am quoting it.

Shri Deve Gowda said about the RSS is as follows,
“RSS is a spotless organisation. In my forty years
long political life, not even once I criticized RSS.”
The Chief Minister said that he was telling this
with utmost responsibility

RSS is a spotless organization. Speaker Sir, I am referring to a function organised in Bangalore. Along with other people, Shri Deve Gowda was also present there. That function has been organised as a mark of protest against Emergency. That function was held on 26 June 1995. Had the statement of Shri Deve Gowda been misquoted he would have denied it. Had all the newspapers published the wrong statement? Nobody denied this statement. If Deve Gowda had told that his statement was misquoted then he could have contradicted the statement. But he never did so. Now what views do people hold about the RSS. If persons of Shri Deve Gowda’s stature, hold the view then it should be given due importance.

Mr. Speaker Sir, what Shri Deve Gowda said about the RSS is as follows, “RSS is a spotless organisation. In my forty years long political life, not even once I criticized RSS.” The Chief Minister said that he was telling this with utmost responsibility. He said that he had no two opinions regarding RSS’s active role during Emergency. Shri Gowda further said, “People who were with Mrs. Gandhi during Emergency, who praised her, who appreciated Emergency, they are today with us and are enjoying power, but RSS is the only organization without any black spot. Others have wavered this way or that way”.

Mr. Speaker, Sir, I am not saying all this for the sake of criticising Shri Deve Gowda. He has made a true evaluation of RSS for which I would like to commend him. But these people want that he should not be praised like this in the House. It had been published not in any single newspaper but in all the newspapers and as I had said that time nobody refuted his statement.

Mr. Speaker, Sir, I would like to reply to one more point which came up during the course of discussion. It has been said that the BJP did not receive wide support from the people. It was said that we got support from the cow-belt. It is improper to refer this entire as cow-belt in the House. We won in Haryana. We received support from Karnataka. It is correct that we are not that strong in Kerala and Tamil Nadu. But we have our organisation there. We have also received a little less than 10 per cent votes in West Bengal. If you talk of votes, then talk of 10 per cent votes. In this House individual Member constitute a party and he is trying to dislodge us by mobilizing people against us. They have every right to do so. Each of them has come alone from his constituency and got united here In Delhi. Why have they got united? Is it for the well being of the country? If so, they are welcome. We are also serving the nation in our own way. Are we not patriots and rendering selfless service to the country for carving a niche for ourselves in politics? We have been sincerely making efforts for the last 40 years to reach at this position. It is not a sudden mandate. It was not a miracle. We worked hard. We went to people, we have struggled. Ours is a party which functions round the year. Ours is not like the parties which mushroom during the elections.

Today, we are unnecessarily being put in an embarrassing position just because we could not get a few more seats. We do admit that it is our weakness. We should have got majority. The President gave us an opportunity and we tried to avail it off. It is another matter that we did not succeed. But do not forget that even than we are going to sit in the House as a largest party in the Opposition and they

We are also serving the nation in
our own way. Are we not patriots
and rendering selfless service to
the country for carving a niche
for ourselves in politics? ….We
worked hard. We went to people,
we have struggled. Ours is a party
which functions round the year.
Ours is not like the parties which
mushroom during the elections

have to run the House with our cooperation. l would like to assure them that we will extend our fullest cooperation to them in conducting the business of the House. But I do not know what type of Government they would form on what programme it would be formed and how would it be run.

So far as Dalits are concerned, out of the total of 77 Scheduled Caste Members, 29 belong to BJP while five members from CPI(M), 01 from CPI, 15 from the Congress Party and 7 from Janata Dal belong to Scheduled Castes. We have the maximum number. Similarly, there are as many as 11 Members belonging to Scheduled Tribes in the BJP out of the total of 41 Members. Please don’t say that we do not have popular base. We do not have wide support from people. If they think that they can form the government without us and that Government will last, I do not see any such possibility. First of all, it will be difficult for the Government to come into being. It is hardly possible that it will survive. The question is how for this Government surrounded by internal squabbles is going to benefit the country. For each and everything they have to approach the Congress party. At present I cannot say, but earlier there were some talks that Congress party has laid down certain condition. Then there was a tale that a Cabinet coordinating Committee will be formed. They can also have coordination on the floor of the House. Without that the business of the House cannot be conducted. It is very good that they want to govern the country. Our good wishes are with them. We shall continue to serve the country. We bow before the numerical strength and we assure you that we will not rest until we achieve the national objective.

Mr Speaker Sir, I am going to submit my resignation to the President.