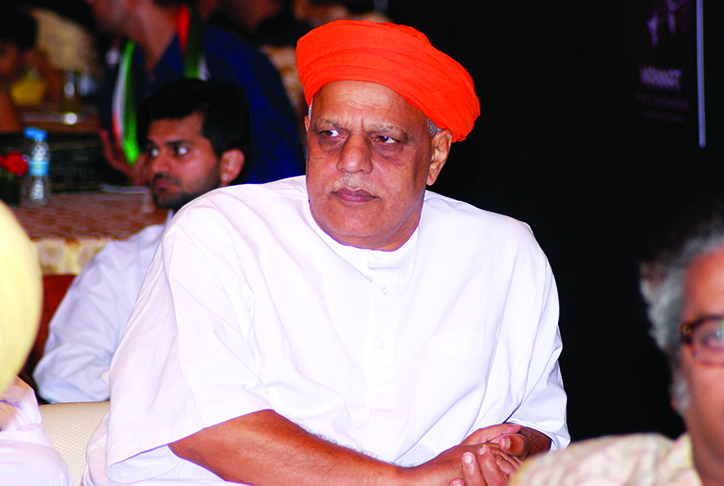 Newly appointed BJP`s Kisan Morcha National President & Lok Sabha MP from Bhadohi Shri Virendra Singh Mast spoke to Vikash Anand, Associate Editor, Kamal Sandesh on issues of farmers at length. As UP BJP Kisan Morcha President he had launched `Gaon Chalo Abhiyaan` to promote awareness among farmers and villagers especially in the field of agriculture. In the interview he discussed how Modi led NDA government is bringing changes in farmer’s life. Here, excerpt of the interview is being published for our esteemed readers.

What is the impact of demonetization on farmers?

“The Demonetization drive is as per Shashtra”. Shastra gives the message that we should not be miser. We should be economical, not having quality of extravagancy. As far as the Indian farmer is concerned,Rabi has been sown.Before rabi, sowing of Oil seeds had been completed. Work of irrigation is going on smoothly. Some work of irrigation is being done by electric pumps; some are being done by solar pumps, with a vast majority of farmers still dependent on rains.
Under the Prime Minister Irrigation scheme, it is planned to provide solar pumps at subsidised rate to farmers from far and wide for irrigation purpose. India has been blessed with an abundance of sunlight. By using solar pumps 45% expenses on farming can be reduced,which can in turn make farming a more profitable business. Inclusion of solar pumps in irrigation is limited to 10%. Under Prime Minister Irrigation scheme intrusion of solar pump in irrigation has to be increased by giving subsidised solar pump to our farmers. Penetration of cheap irrigation and availability of irrigation facilities will not only increase crop cycle from one to two, but also make India a land of Gold.
In fact,the people who are opposing the demonetization drive by saying that it has affected farmers’ farming and poor negatively, have been affected badly. Because, the money earned through corruption was stashed in their coffers is now nothing more than a waste of materials. So, the poor farmers are not affected. Now, Congress leader Rahul Gandhi is showing concern about farmers by criticizing the demonetization drive. It’s quite ironical that this comes from a person who is unable to identify wheat and maize crops, or where potatoes is produced or stored. The aim of demonetization is to make a corruption free society, reducing the widening gap between rich and poor.

Once contribution of agriculture in GDP was bigger,now it is on decline. Why?

Since independence, the share of agriculture sector in budget has been declining. For the first time after independence a government came at Center which has given 42% of budget to rural and agriculture sector.
This government has been able to achieve a lot in this short span of two and half years, which the Congress Government has been unable to achieve in last 70 years.
The Pandit Nehru`s approach was imported which was not fit for the development of the Indian society. Pandit Nehru while laying the foundation of development of the country forgot that India`s majority of population was dependent on agriculture. His focus on heavy industries,at the cost of agriculture sector left majority of population impoverished. If his policy had made farmers strong economically, it would have led to a prosperous and strong economy, ultimately paving the path for industrialization.
Now, Shri Narendra Modi at the helm of affairs is influenced by Indian philosophy. Under him government policies, schemes are made keeping in view the country’s socio-economic condition.

Due to being a non-profitable profession people are leaving cultivation. Is it not necessary to stop this process?

The Ariculture sector has been non-profitable due to inattention. In spite of knowing that there is no substitute of agriculture which can produce grain, fruits, milk etc. It is one of the noblest professions. Agriculture farming is integral part of Indian life and the Indian farmer has only expectation from the government that the revenue given by them should be properly utilized for their upliftment. Our farmer community is having more patience and will-power.

How can we check migration from village to town?

Farming is such a sector where there are unlimited possibilities of employment. Yet this sector has not been properly explored for generating more employment. Now, Modi government is paying proper attention. For making profitable and creating more employment our government has launched Soil Health Card, National Agriculture Market Scheme, National Kamdhenu Breeding Center etc. Now, the Government is encouraging fisheries to bring a blue revolution.

Should agriculture be given the status of industry?

Agriculture must be provided facilities like industry but not be given a status of an industry. I have suggested connecting fields to villages. When farmers increase their visits to fields, production will increase automatically.
Now under Pradhan Mantri Gram Sadak Yojana, there is provision of connecting fields to villages. Agriculture is not only limited to produce grains rather production of fruits, vegetable, milk etc. Road connectivity can be very helpful to take produced grain, and vegetable to the market.

Whether crop is yielded more or less profit goes to middleman?

Government has launched eNAM portal through which farmers can access market directly bypassing middleman.Through eNAM, the government plans to create a nationwide online market for farm products by linking all mandis and agricultural market trading committees in the country.

What present Union government has done in two and half year to improve social and economic status of farmers?

The Modi government has done a lot of work for farmers. I have also mentioned this earlier. Under UPA regime, India used to import pulses in huge quantity. Now, with the encouragement of government, pulse production has been increased. I think in the coming two years there will be no need to import pulses.
Our government has launched a single-window facility for farmers. BJP government in Madhya Pradesh has already implemented single window system for farmers. Land in Madhya Pradesh is not as much fertile as Uttar Pradesh. But Madhya Pradesh is doing well. For the last 15 years UP did not get good leadership at the helm of affairs. At governance level, the state has been facing corruption, bad governance. If the State government only implements central government schemes properly it would be a big thing for farmers.

How much national cleanliness drive has been successful in villages?

Cleanliness has been the supreme tradition of our culture. Through the cleanliness drive, Prime Minister Narendra Modi has made it a people’s movement. On Modiji`s appeal village after village has become part of this movement. When Modiji appealed to the people to leave subsidy, 5 crore people acted on his appeal and left subsidy.As a result, 10 crores poor people got free gas connection.

When will KisanMorcha team be formed?

Kisan Morcha has big structure at state and national levels. We are discussing with the States on forming team. Elections are taking place in five states. We will declare the team at the earliest.