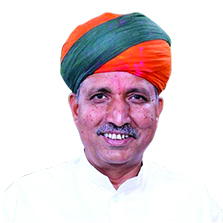 Union Minister of State for Finance and Corporate Affairs Shri Arjun Ram Meghwal, who hails from Rajasthan, currently represents the Bikaner constituency in the Lok Sabha. He was elected to the 15th and the 16th Lok Sabha from this constituency. Shri Meghwal served as Chief Whip of the Party in 16th Lok Sabha before assuming charge as Union Minister. He was awarded the best Parliamentarian Award in 2013. In an exclusive interview for Kamal Sandesh with Associate Editor Ram Prasad Tripathy, Shri Meghwal revealed the core objectives behind the demonetization or cancellation of legal tender scheme and its implications for the national economy. He also outlined some of the future plans of the government to unearth black money to root out corruption and the menace of counterfeit currency. Excerpts:

To curb black money the Union government has come up with the demonetization move. What are the main objectives behind this policy and what are its implications for our national economy?


To answer your question, primarily there are four reasons behind this policy, namely, to expunge fake currency from the system, to root out corruption, to impound the 23.2 % black money in our economy and to cease the terror funding, which compelled the Union government to take the demonetization decision resulting in cancellation of legal tender of Rs. 500 and Rs. 1000 notes.

This major step will stop the circulation of the Black money and majority of the illegal activities happening in our country. Smuggling of narcotics, duplicate medicines, smuggling of weapons, illegal trading and business through black money will stop. Middle class lower middle class and people from weaker sections of the society will get the maximum benefit out of this policy. Now the middle class and poor don’t even dare to think about a house in cities and urban centres, they can’t afford to send their children to a good school for education or good hospital for treatment. However, this decision of the government is likely to improve the scenario and ensure a better life quality for them. Evidently, post 08 November decision, the common public is fully behind the decision of Modiji. People have largely welcomed the decision, notwithstanding the short term ordeal which they have had to undergo.

People know very well that while the difficulties will last few days, but this country will be cleansed of black money and greatly benefit from higher tax revenue resulting in enhanced public spending. People have stood in queues with great patience in-front of ATM counters and Banks as if they were rendering some national service. It is only some narrow minded and thoroughly corrupt political leaders who tried their best to manufacture public anger, but common people thoroughly rejected their insinuations. It clearly shows the public mood and their support for this bold decision of the government against black money. I strongly believe this historic decision will add vigour to our economy and the country will reap the benefits in-terms of higher economic growth and faster pace of development in the near future.

Do you consider the decision as well-intended but an ill-prepared move? What steps the government has taken so far to reduce public inconvenience?

I believe, replacing 86 per cent of the currency in circulation with new notes could not have been executed in a better way than being currently done. When currency replacement of this scale happens, some initial inconvenience for the public was expected and the Prime Minister said this in his announcement. But it’s moving smoothly with each passing day and the queues are getting shorter. We are reviewing the situation on a daily basis. To reduce the difficulty, government has allowed the old notes for circulation at tollgates, hospitals, railway stations, airports, petrol pumps, to purchase seeds and to buy medicines. For marriages one can withdraw and exchange upto Rs. 2.5 lakhs. Similarly, for farmers and the agrarian class the government has relaxed the norms on withdrawal limits. However, recalibration of around 2 lakhs ATMs throughout the country was an issue in the first few days, which is being done on a war footing and it is only a matter of time before complete normalcy is restored in terms of banking transactions. I think, replacing such a large percentage of currency without any social unrest and any significant economic disruption was an achievement.

Opposition parties have demanded immediate rollback of demonetization policy. Is there any possibility of the Government accepting their demand?

The answer is a clear No. Under no circumstances the government will rollback this decision. We appeal the opposition parties to give their constructive suggestions for the functional part of the scheme; government will definitely look into it. Largely, the public is happy with the government’s move which will help crack down on black money used for terror activities, bribery and nasty politics. People are willing to suffer a little inconvenience for a better future. So there is no question of rollback.

What is the actual intention of the opposition parties who oppose this initiative?

I think people sitting on constitutional posts like Chief Minister should not unnecessarily oppose this decision taken by the government of India. It is not the decision of a Political Party. Someone says it is an immature decision, and yet another asks who has given power to this government to implement this scheme. When we came to power in 2014, we have been trying our best to counter black money. PM Shri Narendra Modi formed SIT in the very first cabinet meeting to bring back black money stashed abroad in tax havens, enacted legislations to bring this money back, launched Income Declaration Scheme(IDS) for those who want to honestly declare their undeclared money, discussed it several times in his Man Ki Baat programme and in TV Interviews. Therefore, this decision was well thought out and part of a series of measures to curb black money and stop terror funding, fake currency circulation, smuggling and everything unlawful that adversely affects our national economy. Politicians complaining against demonetization are only exposing themselves.

In Rajya Sabha, Congress leader Gulam Nabi Azad compared demonetization with terrorist attack in Uri. What’s your opinion?
It is a highly unfortunate and insensitive statement on the part of a senior Congress leader. He has compared demonetization decision with the Uri attack by Pakistani terrorists. Indirectly he is trying to find an equivalent with something like terrorism to the benefit if its perpetrators operating from across the border. Difficulty for the public for standing in a queue can’t be compared with terrorist attacks on our soldiers. It is a great offence of our martyrs who laid down their lives to safeguard the boarders of our motherland. I will say, the Congress leader has given his statement in Rajya Sabha, so he must come to the house and offer his apologies to the nation for his statement.

Demonetization will unearth black money in the form of cash. What will be the next step in this direction to expose black money in other forms especially stashed abroad?

Since Modiji came to power in 2014, he has taken a series of steps to unearth black money. Now government will focus on the anonymous property and unidentified transactions to expose black money. With government’s initiatives information exchange is going on with various countries treated as tax heavens. We are constantly in touch with these countries and trying our best to bring back black money. However, our aim is to stop the generation of black money in the country.

Do you think this bold step on demonetization will force us to become a cashless economy?

Government is opening zero balance bank accounts for the poor, rural households and BPL families under Jan Dhan scheme. We are integrating every account with AADHAR and discouraging transactions through cash and encouraging digital transaction. Even the MGNREGA worker is getting his payments through bank accounts. Now even the subsidies for gas are directly going to the bank accounts of BPL families and others. For smooth transactions, government has started Postal banking, instructed banks to open more branches and establish more ATMS where the Banking network is not well developed. With these steps we are actually heading towards a cashless economy. It will definitely take Time. But the present demonetization step will prove to be a big decision in this direction.

As per experts’ view government will get huge extra money due to demonetization. Which sector will get its benefits? What will be its implications?

From the very beginning the Prime Minister has clearly said that this government will do everything for the benefit of the poor. Therefore, our focus will be on the Social sector, for weaker section of the society and for overall development of the country.
Certainly, its implications are far reaching. The demonetization move will help banks lend at a cheaper rate to businesses, agriculture and infrastructure while at the same time getting rid of the shadow economy. Inflation will be under control, and black marketing will be severely hit as a result of this policy. In the long term, it is going to change the way traders trade and how we manage the household budget. It would bring more transactions into the banking system, we have a cleaner and bigger economy, a bigger tax base, a transparent taxation system and this one decision will reenergize the Indian economy and prepare it for a Big Leap.

Can we expect more such surprise announcements from the Modi Government in the future in the interest of the economy?
The fight against Black Money was never going to be easy and business as usual approach is not the answer to deal with this. But Modi Sarkar has accepted this challenge and our commitment is total. The government is exploring all options that will dismantle India’s notorious parallel economy that thrives at the cost of poor and marginalized sections of the society. We will definitely take this battle against black money to its logical end and expose its silent supporters and active promoters.