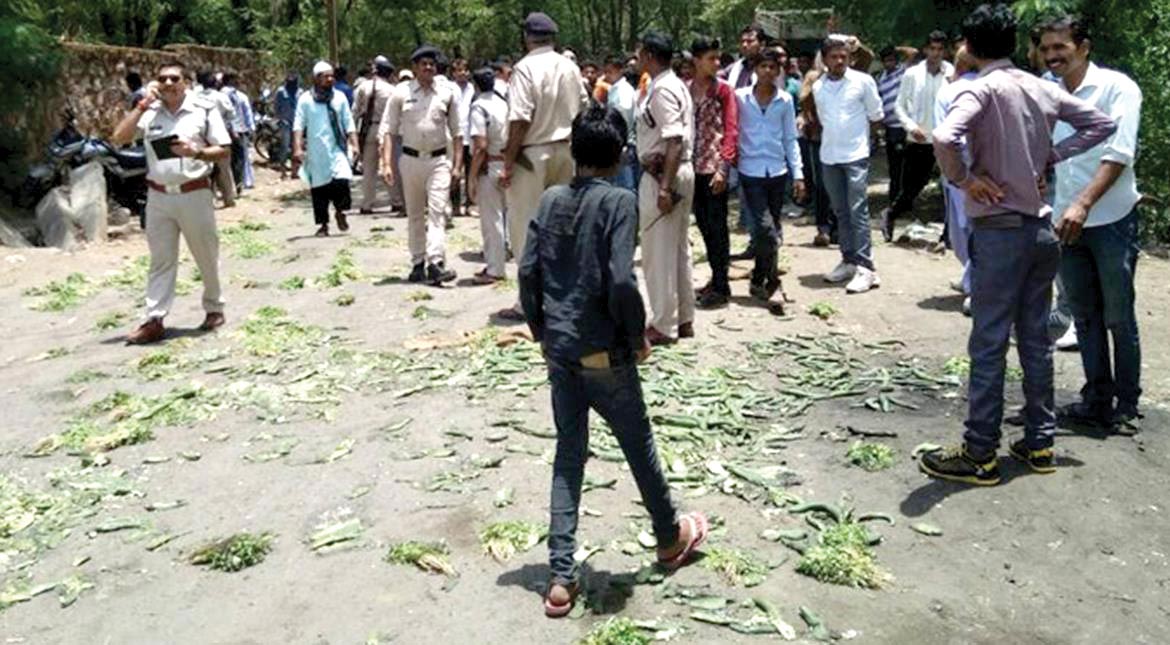 ongress is at it again. Back to its old game of fishing in troubled waters and adding fuel to fire. As is its wont, Congress is trying to make political capital out of the unfortunate incident in Madhya Pradesh’s Mandsaur the death of five people in firing following violent agitation by farmers.

It is a matter of deep anguish that the violence led to loss of human lives.While the NDA government at the Centre and BJP are seized of the matter and addressing the concerns of the farmers, the opposition, particularly Congress, is seeking to derive political mileage from the incident. Has Congress any moral right to talk about the plight of farmers after having ruled the country for more than five decades and neglected their welfare for so many years?

In fact, the conditions of farmers worsened during the decade-long UPA rule when suicides by farmers increased significantly and agriculture growth rate dipped to less than 2%. All parties must look beyond narrow political gains and support the MP government and Centre in restoring peace and normalcy to the troubled state. Unfortunately , instead of dousing ignited passions, political parties are doing just the opposite.

Although there is a clamour for farm loan waiver from various states, it certainly is not a long-term solution as it offers only temporary relief to the farmers. The only solution is to ensure remunerative prices while controlling the prices of inputs. The RBI governor has cautioned the risk of fiscal slippages could increase with the announcements of large farm loan waivers.
In contrast to the inadequate attention paid to agriculture and farmers’ well-being by the UPA regimes, Prime Minister Narendra Modi had from day one made it clear that Gaon, Gareeb, Kisan, Mazdoor, Mahila aur Yuva are his government’s top priorities. In tune with this vision, several pro-farmer initiatives were launched with the aim to double the farmers’ income by 2022.

The government’s biggest ever contribution to crop insurance is being made under the flagship programme of Pradhan Mantri Fasal Bima Yojana, which covers all crops for all seasons.Similarly , another major initiative is the Pradhan Mantri Krishi Sinchayee Yojana, which seeks to provide water to every field with an outlay of Rs 50,000 crore. About 7.1crore soil health cards of the targeted 14 lakh crore have already been distributed to farmers, while e-NAM seeks to connect all agri-markets to enable farmers to know the remunerative price and sell produce at that rate.

Providing electricity to all un-electrified villages has been taken up as a major mission, apart from accelerating rural road connectivity for faster transportation of agri-produce by farmers. A huge thrust has been given to farm credit in this year’s budget by allocating Rs 10 lakh crore. Doordarshan also started an exclusive kisan channel to educate farmers on new technologies and keep them abreast of the latest issues.

The Congress demand for the resignation of MP CM Shivraj Chouhan reflects the political bankruptcy of Congress. It would be pertinent here to mention that 24 farmers were killed in police firing at Multai in Betul district in MP in 1998 when Digvijay Singh was CM. Why did he not step down then ?

In fact, MP now has an extremely farmer-friendly CM in Shivraj Chouhan.Thanks to his focus on agriculture MP witnessed more than 20% growth rate in agriculture in the past few years. Various pro-farmer measures taken by MP government include providing full interest subsidy on farm credit, Rs 4,500 crore subsidy on energy to farmers and about 10-hour uninterrupted power supply to farm sector. Also, there was a phenomenal increase in irrigation potential in that state from 7.5 lakh hectares to 40 lakh hectares. The MP government is also planning to set up a price stabilisation fund to ensure remunerative prices for all crops.

It has also undertaken the pioneering project of bringing Narmada water to river basins of Malwa and already linked Narmada with Kshipra river.A network of more than one lakh kilometre of rural roads has been built to enable farmers to quickly reach their produce to agriculture markets. The state is also providing the largest insurance coverage for farmers. Claims worth Rs 4,060 crore for rabi and Rs 4,416 crore for kharif were received.

MP’s current problem arose due to a glut, a problem of plenty increased production of crops like cereals, pulses, onions and soyabean and lack of remunerative prices. Currently , the CM has agreed to 11 of the 13 demands put forth by the farmers’ organisations. He has already announced a compensation of Rs 1crore each to the kin of those killed in firing and a job to an eligible member from each family .

I appeal to farmers not to be misled by self-serving politicians. Addressing various concerns of farmers on a longterm basis needs sustained and coordinated efforts of the Centre and all states.The NDA government is addressing the issue in a completely holistic manner be it creation of more godowns, cold storage chains, refrigerator vans, value addition through food processing units, universal crop insurance, uninterrupted power supply , affordable and timely credit or access to market information.

{The writer is Union Minister of Urban Development, GoI)