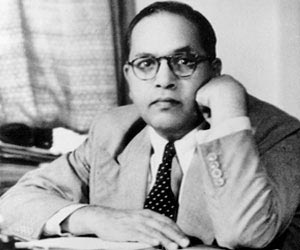 Dr Babasaheb Bhimrao Ambedkar represents a multifaceted personality contributing immensely to enrich various facets of Indian national life. As the nation celebrates his 124th birth anniversary on April 14, 2015, the people remember him as the chief architect of the Indian constitution, a social revolutionary and a Dalit thinker. Apart from earning a number of doctorates from prestigious Columbia University and the London School of Economics for his study and research in law, economics and political science, he wrote fearlessly on various issues as an academician and as a political activist.

As a political activist and as a mass leader, Babasaheb was raising issues far ahead of his times, hence a radical approach was required to galvanise support for his agenda of social reform so as to bring the issue of caste discrimination and untouchability to the central focus. As an academician, he tried to frame scholarly and well researched responses on the burning issues of the day which remain relevant even today. After his return from the USA – where, on a scholarship grant from Sahyaji Rao III, the Gaikwad ruler of Baroda, he went for his doctoral studies and obtained degrees in economics and political science – he joined service of Baroda state. He simultaneously started working as a social activist fighting against caste discrimination and untouchability then widely prevalent in Indian society. His activism and scholarly espousal of the cause of the deprived and oppressed sections soon saw him emerging as a political leader of national stature.

So far, Babasaheb’s writings in India have been selectively read within a particular framework showing him as a champion of deprived and oppressed sections of Indian society. He is seen as a chief architect of Indian constitution who laid the foundation of liberal democracy in the country expecting the state to take welfare measures in the interest of weaker sections of the society.
But other side of his personality remains unexplored. The academician and thinker in him, his advocacy for exchange of population at the time of partition, his concerns for preserving cultural contours of Indian civilization, his decision to embrace Buddhism not only as a political act but as a result of a honest spiritual quest, his rejection of Islam, Christianity and Marxism and his reading of India’s past – and many more such other dimensions of Babasaheb’s personality still await to be studied, researched and explored.

He further answers his own question emphasizing that these apprehensions were rooted in the history of India wherein the country had to face the ignominy of defeat and suffer at the hands of conquerors due to treachery of its own people. He said on the occasion, “What perturbs me greatly is the fact that not only India has once before lost her Independence, but she lost it by the infidelity and treachery of some of her own people. In the Invasion of Sind by Mahommed-Bin-Kasim, the military commanders of King Dahar accepted bribes from the agents of Mahommed-Bin-Kasim and refused to fight on the side of their King. It was Jaichand, who invited Mahommed Ghori to invade India and fight against Prithvi Raj and promised him the help of himself and the Solanki kings.

When Shivaji was fighting for the liberation of Hindus, the other Maratha noblemen and the Rajput kings were fighting the battle on the side of Mughal emperors. When the British were trying to destroy the Sikh Rulers, Gulab Singh, their principal commander sat silent and did not help to save the Sikh kingdom. He had very convincing answers on the question of whether the democratic Constitution will survive the test of time. He said, “It is not that India did not know what democracy is? There was a time when India was studded with republics and even where there were monarchies, they were either elected or limited. They were never absolute. It is not that India did not know Parliaments or Parliamentary procedure. A study of the Buddhist Bhikshu Sanghas discloses that not only there were Parliaments – for the Sanghas were nothing but Parliaments – but the Sanghas knew and observed all the rules of modern Parliamentary procedures, be it about seating arrangements, rules regarding Motions, Resolutions, Quorum, Whip, Counting of votes, voting by Ballot, Censure Motion, Regularization, Res Judicata, etc. Although these rules of Parliamentary Procedure were applied by the Buddha to the meetings of the Sanghas, he must have borrowed them from the rules of the political Assemblies functioning in the country in his time.”

Exhorting the people of India to guard the hard earned independence, he said, “Will history repeat itself? It is this thought which fills me with anxiety. This anxiety is deepened by the realization of the fact that in addition to our old enemies in the form of castes and creeds, we are going to have many political parties with diverse and opposing political creeds. Will Indians place the country above their creed or will they place creed above country? I do not know. But this much is certain that if the parties place creed above country, our independence will be put in jeopardy a second time and probably be lost forever. This eventually we must all resolutely guard against.”

While the country feels indebted for his immense contributions in the nation building process, many other aspects of his multifaceted personality remain yet to be explored.