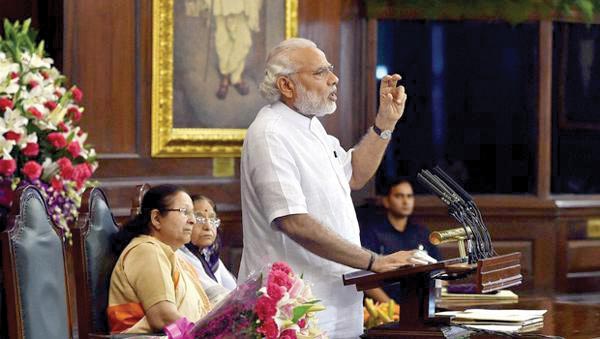 Prime Minister Shri Narendra Modi’s thoughts and vision on women have always been very clear. He is convinced this matter is not about ‘Women Development’ anymore but is of ‘Women-Led Development’ within which a wide spectrum of issues from economic development to social justice are covered. The deep sense of concern and responsibility he feels towards the situation of women has directly resulted in the Indian government taking many strides to provide them an equal and equitable platform in every aspect. This is demonstrated by a host of government initiatives ranging from Pradhan Mantri Suraksha Bandhan Yojana to Sukanya Samriddhi Yojana, from Beti Bachao Beti Padhao campaign to Pradhan Mantri Ujjwala Yojana.

The aim of ‘Beti Bachao Beti Padhao’ campaign is to foster gender equality and to empower the girl child through renewed stress on her education. This campaign that was started due to the Prime Minister Narendra Modi’s sense of initiative in this matter, has already started resulting in positive outcomes. There’s a marked improvement in sex ratio not only in states like Haryana, but also at the overall national level. The Prime Minister said, “Beti Bachao, Beti Padhao is moving forward with rapid strides. This is no longer just a government programme. It has now become a campaign of public education. It has become a people’s movement.”

The concern towards the future of our daughters led to the conception of the Sukanya Samriddhi Yojana whose objective is to ensure much-needed financial security to them. Pradhan Mantri Suraksha Bandhan Yojana that was started to boost social security and life insurance has benefited women the most. The Prime Minister also made an appeal to people to consider gifting this scheme to women instead of gifting presents on festive occasions. He said, “The progress of humanity is incomplete without the empowerment of women. The issue is no longer Women Development but it is Women-Led Development.”
The primary beneficiaries of the programmes of the government have been the poor, and even among the poor it has been the women. Pradhan Mantri Ujjwala Yojana was conceived for those poor households in which our helpless mothers and daughters have been forced to inhale harmful smoke in their kitchens. Under this scheme about 1.75 crore deposit-free LPG connections have already been released against the ambitious overall target of 5 crore connections. The Union Government has decided that maternity benefits must reach every single mother.

Per this scheme, every mother of a new-born will get a cash aid of Rs. 6000. This is aimed at reducing malnourishment among mothers so that health outcomes for upcoming generations can also be impacted positively. Pradhan Mantri Surakshit Matritva Abhiyan also ensures free health check-ups which provide great convenience to pregnant women. The 9th of every month has been fixed for this free health check-up for pregnant women.

The government is working towards ensuring employment opportunities, creating a conducive atmosphere for them at workplaces, ensuring motherhood and career prospects do not hamper each other and enabling more valuable contributions from women to the world at large. The government is also working towards safety and security by exploring the provision of a panic button and smartphones that can come to the aid of women along with facilities like GPS. Prime Minister Narendra Modi observed, “It’s important to understand ourselves and our strengths. When it comes to multi task activities, nobody can beat women. Such is the strength and we must be very proud of it.”