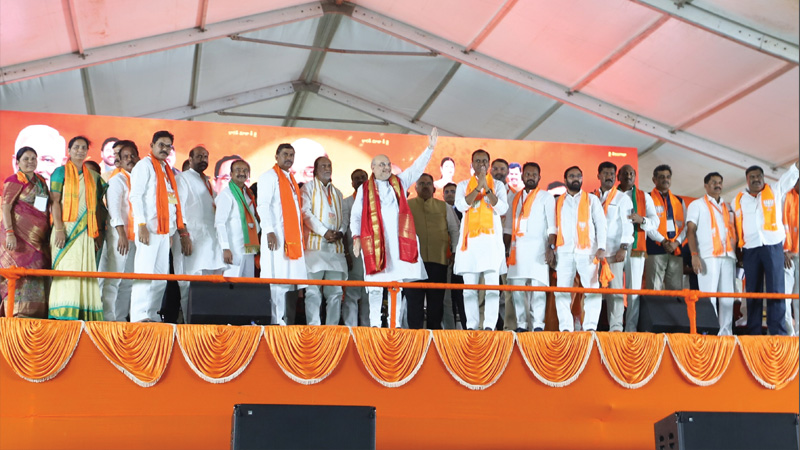 Addressing a huge public rally at Munugode, Telangana on 21 August, 2022, Union Home Minister Shri Amit Shah said the dreams of the people of Telangana, who had waged a relentless battle to achieve a separate state, would be realised only if the BJP was voted to power.

He said Prime Minister Shri Narendra Modi is highly committed for the growth and development of Telangana. But the TRS government is taking Telangana towards a massive debt trap and has created a financial mess in the state. Telangana was created with some dreams and aspirations of the people of the state, and all these dreams and aspirations will be fulfilled by the Bharatiya Janata Party government which will soon be formed under the leadership and guidance of PM Shri Narendra Modi.

He said, the joining of Shri Rajgopal Reddy in the Bharatiya Janata Party holds great significance as with this the countdown of the demolition of the KCR government in the state has started in Telangana.

The KCR government is anti-Dalit too. KCR had promised to the people of Telangana that he will send Rs.10 lakhs to every Dalit household. Similarly, KCR had also promised to give every Dalit in the state 3 acres of land and 1 acre of land to every Tribal. But the TRS government has not fulfilled even a single promise, he added.
KCR had also promised to give a two bedroom house to every poor in the state, which has also not been fulfilled. Since 2014 all recruitment in the education sector has been stopped. Recruitment is open only for the KCR Family and that too in all sectors. The people of Telangana are suffering and they have been betrayed and fooled by the KCR government, Shri Shah said.

He said despite the fact that the Narendra Modi Government gave more Rs 2 lakh crores financial help to Telangana, the state is still under deep debt. We have to take Telangana out from this financial mess and take the state in the fast pace of growth and development.