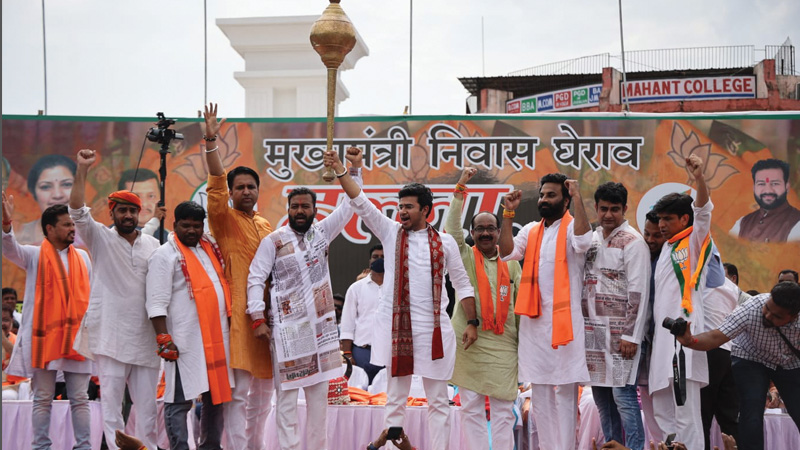 The Bharatiya Janata Yuva Morcha led a protest march on 24 August in Raipur against Chhattisgarh Government over the rising unemployment, corruption, rape and suicide cases in the state.

Over one lakh youth participated in this movement which was led by BJYM National President Shri Tejasvi Surya.The BJYM was protesting over the promises made by the Congress party for the benefit and welfare of the youth, which have not been fulfilled even after 45 months.

The BJYM Is also raising its voice over the growing unemployment rate in the state. The BJYM also pointed out that the state government failed to provide Rs 2,500 per month as unemployment allowance to the citizens.

The BJYM also took up issues of vital importance like drug menance, rising cases of rape and youth suicide across the state and corruption in the government employment sector.

The BJYM was also raising voice over the failure of the state government to implement the schemes of the Central government for youth welfare in the fields of employment and sports.

BJYM National President and Bengaluru South MP Shri Tejasvi Surya said the Chief Minister of Chhattisgarh, Bhupesh Bhagel, was not upholding the integrity of the office but acting as a ‘Collection Master’ of Sonia Gandhi. He also added that Chhattisgarh government is promoting mafia Raj in every department of the state.