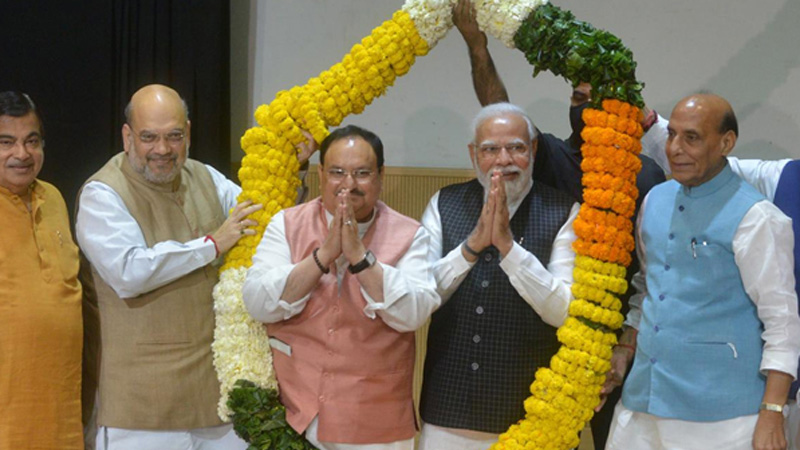 Addressing the party MPs at the BJP’s Parliamentary Party meeting at Ambedkar Bhawan in New Delhi on March 15, 2022, Prime Minister Shri Narendra Modi sought to send a strong message to MPs that family politics won’t be allowed in the party. The Prime Minister said that he takes responsibility if anyone’s candidature was rejected by the party in the just concluded elections.

A two-minute silence was also observed by the leaders ahead of the meeting to pay their respects to veteran singer Lata Mangeshkar who recently passed away, Indian students who passed away in Ukraine and the RSS activist who was killed in Karnataka.

A day before the meeting, the party had asked all the Lok Sabha and Rajya Sabha MPs to be present at the meeting. This was the first meeting after the BJP got landslide victories by retaining power in all four of the five states that went to the polls. These four states are Uttar Pradesh, Uttarakhand, Manipur and Goa. PM Shri Narendra Modi played a very vital role in BJP’s mega victory in the politically crucial states of Uttar Pradesh and Uttarakhand, Manipur and Goa.

“Dynasty is dangerous for democracy, we have to fight against it,” he added.
The Prime Minister also briefed the MPs on the evacuation of Indian nationals from Ukraine.

ASSEMBLY ELECTIONS MANDATE IS AGAINST ‘PARIVARVAD’

Criticizing the Congress and Samajwadi Party, Prime Minister Shri Narendra Modi said that the result of Assembly elections held in five states is a mandate against ‘parivarvad’.

Parliamentary Board of the Bharatiya Janata Party on 14 March appointed central observers and co-observers to elect the leader of the legislative party in Uttar Pradesh, Uttarakhand, Manipur and Goa Assembly. BJP is comfortably forming government in the four states thanks to the thumping majority.