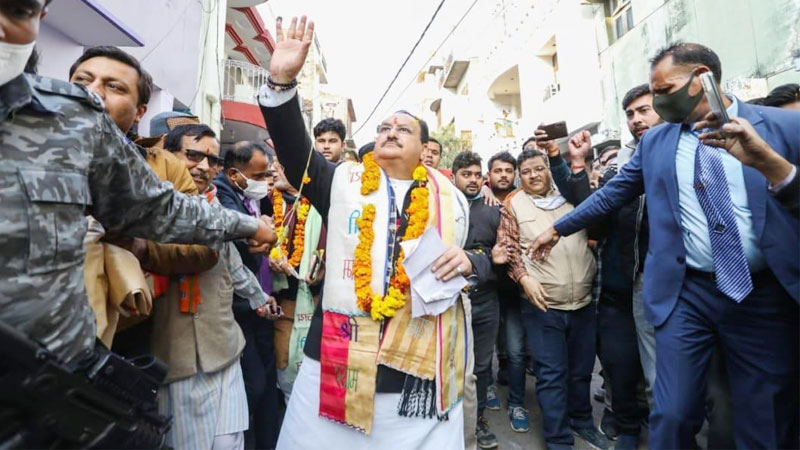 Bharatiya Janata Party National President Shri JP Nadda conducted a door-to-door campaign and addressed the ‘Prabhavi Matdata Samvad’ in Hathras, Uttar Pradesh on 30 January, 2022. Addressing the rally he said the BJP government in the state has fulfilled all its promises to the people and the basis of development has been “Sabka Saath, Sabka Vikas, Sabka Vishwas” in the state.

“One thing about the BJP, I can say, is that whatever the BJP has said in 2017, it has fulfilled. The party has not turned back in any way. All other political parties keep changing according to the seasons,” Shri Nadda said during the rally.

Urging the people to decide whom to vote based on their work; Shri JP Nadda said that every party makes popular promises during election times. “Take decision based on our work. We did what we said. We revoked Article 370. The oppositions gave protection to goons. No riots under CM Yogi Government. There is no tension between communities,” he said.

In elections, every political party and every leader tries to make his point in his own way. In such a situation, when politicians make popular promises, the voter gets confused. In such a situation, the basis for choosing a political party should be what that leader and that party have done in the past, he further said.
Prior to the rally, the BJP National President held a door-to-door campaign in the constituency and distributed pamphlets to the residents there, seeking support for the party’s candidate.

SIRATHU (KAUSHAMBI) RALLY
‘Samajwadi Party is a supporter of anti-nationals’

BJP National President Shri JP Nadda on 03 February, 2022 addressed a huge rally at Kaushambi’s Sirathu after Deputy Chief Minister Shri Keshav Prasad Maurya submitted his nomination papers for the state Assembly polls. Speaking to the people he said ‘Goons’ is a small word for them. The Samajwadi Party is a supporter of anti-nationals. The party tried to withdraw cases against terrorists involved in bomb blasts in the state, when it was in power in Uttar Pradesh and a special court in Gorakhpur had awarded life sentence to one of them, Shri Nadda said.

In another incident, a CRPF camp in Rampur was attacked, in which seven soldiers were killed. The CBI arrested seven people in the case but Akhilesh Yadav tried to withdraw the case against them in the direction of Samajwadi Party leader Azam Khan, who is currently fighting the elections from jail.

“Of the seven, four were awarded capital punishment and three got life imprisonment. If such people rule state, there will be mafia raj,” Shri Nadda said. “Their leaders are resting either in jails or are out on bail,” he added.

In Shahjahanpur and Bareilly Shri JP Nadda highlighted the pro-farmers’ schemes launched by the BJP government at the centre and in the state in the ‘Prabhavi Matdata Samvad’ organised on January 28, 2022 in both the districts. Shri JP Nadda also gave momentum to the party’s election campaign in western Uttar Pradesh by organizing door-to-door campaigns in Shahjahanpur and Bareilly.

Terming the Samajwadi Party (SP) and the Bahujan Samaj Party (BSP) as anti-farmers, Shri Nadda said farmers were harassed under the governments of both parties whereas under the BJP government, the minimum support price of crops was increased and subsidy was given on fertilizers.

“What Prime Minister Shri Narendra Modi has done for farmers has not been done by any leader in the country. The budgetary allocation to the agriculture sector has increased under the BJP government. It clearly shows that the BJP is committed for the welfare of farmers. The recommendation of the Swaminathan Commission was implemented with the increase in minimum support price for agriculture products,” he said.

BJP National President Shri Jagat Prakash Nadda on Sunday conducted a door-to-door campaign in Shikohabad, Uttar Pradesh ahead of Assembly elections in the state on January, 30. Massive crowds had gathered to welcome him.
“Over 11 crore farmers are registered under the PM crop insurance scheme in the country while 2.70 crore farmers in UP are associated with the scheme. Soil health card has been distributed among 3.70 crore farmers in UP,” he said.

Shri Nadda said 45 lakh farmers in UP were getting pension while 36,000 crore loans of farmers had been waived. “The Yogi government has made Rs. 1.40 lakh crore payments to sugarcane farmers. Under SP and BSP governments, sugar mills were sold and closed, but new sugar mills have been set up under the Yogi government and farmers are getting 50% discount in power supply. Today, UP is number one in crop production,” he said.

The BJP President said the SP was giving tickets to candidates who were in jail or out on bail however, criminals, gangsters and mafia have been severely punished under the BJP government,” he added.