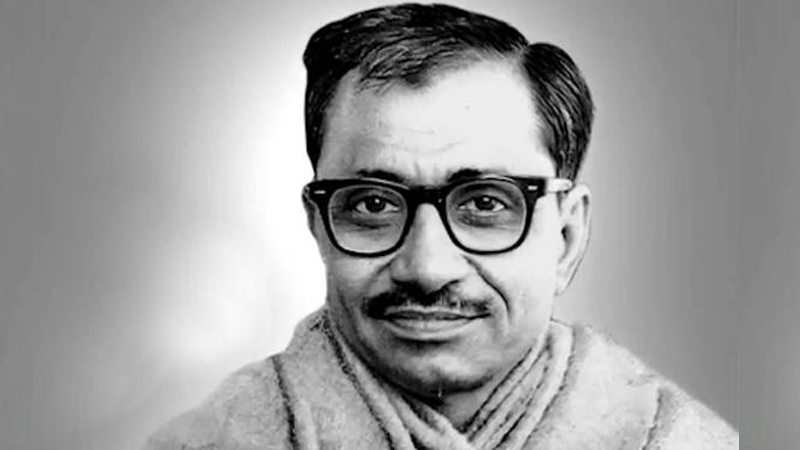 It must be realised that the object of our economic system should not be to make extravagant use but a well-regulated use of available resources. The physical objects necessary for a purposeful, happy and progressive life must be obtained

Man’s Place in the Capitalist System
The use of manpower and the employment question will have to be thought of in the context of the human being as a whole, as an integral being. The economic theories of the past few centuries and the structure of society based on these theories, are such that there has been a thorough devaluation of the human being. His personality is altogether irrelevant to the economic set-up. A capitalist economy recognises only an economic man’, whose decisions are all based entirely on calculations of gain and loss in terms of material wealth. For this economic man, five rupees are always more than four rupees. He works solely to gain more wealth and exerts himself to get the maximum gain. For him, human labour is a commodity to be bought and sold in the market, just like other commodities. This is free enterprise. It holds all other restrictions and regulations unjust, saves the brake of competition. In the race, no one is prepared to stop and give a helping hand to the weak who are left behind; nay, eliminating the weak is considered just and natural. He is an uneconomic, marginal unit, not fit to exist. This is what it advocates. With the elimination of such marginal units, the economic power accumulates in the hands of a few. This is considered normal and natural in a capitalist system. But when a monopoly is established, even the check of competition ceases to operate. In such a situation, the incentive resulting from competition is no longer available. Prices are arbitrarily fixed, and the quality of products deteriorates.

Even as regards the consumer’s needs, the capitalist is guided not by the necessities and desires of the consumer but by his purchasing power. The needs of the wealthy and well-fed are attended to rather than those of the poor and the hungry. As a result, where countless varieties of goods are produced for the needs of the wealthy, even the necessities of life for the poor become scarce.

No Development Possible under the Capitalist System


The centralisation and monopolisation of production undermine the influence of the consumer. The markets are so organised that the consumer has to go for standard products. This standardisation is on the increase at such a pace that the individual preference of the consumer is ignored. Like the books in the library, even human beings are allotted numbers as consumers. The system, which boasts of giving the highest importance to the individual, has ironically destroyed all individuality. The capitalist system is incapable of helping the development of an integral human being.

Socialist System is a Reaction

Socialism arose as a reaction to capitalism. But even socialism failed to establish the importance of the human being. Socialists contented themselves by merely transferring capital ownership into the State’s hands. But the State is even more of an impersonal institution.

Rigid rules and regulations conduct all the business of the State. Generally, there is no place for individual discretion, and even where such discretion is allowed, the slightest laxity in the sense of duty and social responsibility on the administrators’ part results in corruption and favouritism.

There is no private property in a socialist society. This removes the problems accompanying the institution of private property. However, the incentive for production and conservation of resources, and economy in utilisation, accompany the institution of private property. There has been no alternative arrangement to preserve these. The State is made supreme and the sole authority in all matters. The individual citizen is reduced to a mere cog in this giant wheel. There is no provision to inspire the individual to fulfil his role. AsvDjilas states, “The class of old-fashioned exploiters has been eliminated, but a new class of bureaucratic exploiters has come into existence”. In his analysis of history, Karl Marx put forward that capitalism contains the seeds of its own destruction and that communism is a natural and inevitable successor to capitalism.

This concept may help foster faith in the communists about their ultimate victory, but such a determinist view certainly destroys the urge for reform and dynamism in man. He is no longer the creator of a new order; he is merely incidental to a predetermined historic process. His task is only to accelerate the process. Therefore, even as he tries to organise workers, he cares little for their welfare but uses them as mere tools for the revolution. The dialectic materialism of Marx, too, operates only so long as the State is not established as supreme after destroying the capitalists. Thereafter, the State puts a stop to the operation of the principle of dialectic materialism. In the name of crushing the counter-revolutionaries, the State becomes more and more totalitarian. The day when the State is to wither away, yielding place to a stateless society remains a mere dream. In fact, according to the Marxist view, to obstruct the process of thesis, antithesis and synthesis is in itself reactionary. His own standards thus falsify Marx.

Away, yielding place to a stateless society remains a mere dream. In fact, according to the Marxist view, to obstruct the process of thesis, anti-thesis and synthesis is in itself reactionary. Marx is thus falsified by his own standards.

Both these systems, capitalist as well as communist, have failed to take account of the ‘Integral Man’, his true and complete personality and his aspirations, One considers him a mere selfish being hankering after money, having only one law, the law of fierce competition, in essence the law of the jungle; whereas the other has viewed him as a feeble lifeless cog in the whole scheme of things, regulated by rigid rules, and incapable of any good unless directed. The centralisation of power, economic and political, is implied in both. Both, therefore, result in the dehumanisation of man.

Man, the highest creation of God, is losing his own identity. We must re-establish him in his rightful position, bring him to the realisation of his greatness, re-awaken his abilities and encourage him to exert for attaining divine heights of his latent personality. This is possible only through a decentralised economy.
To be continued…

Speech delivered by Pt. Deendyal Upadhyaya on 25 April, 1965 in Mumbai

(Source- Integral Humanism- An Analysis of Some Basic Elements)