Prime Minister Shri Narendra Modi congratulated the people of Bihar and BJP Karyakartas for thumping victory of NDA in the state. Addressing the grand ‘Thanks giving programme’ organized at the BJP National Headquarters in New Delhi, the PM said that family-run parties are biggest threat to nation’s democracy. He also thanked women, the ‘silent voters’ in Bihar for ensuring NDA victory. The National Democratic Alliance (NDA) is again given mandate by the people in elections, the results of which were declared on November 10, 2020. PM Shri Narendra Modi also praised the BJP karyakartas for their hard work for victory in by-election held simultaneously across the country. The programme organized to celebrate the grand success of the party in the Bihar legislative assembly elections and by-elections held across the country was also addressed by BJP National President Shri Jagat Prakash Nadda and attended by BJP Parliament Board members and a large number of party Karyakartas. The Union Defence Minister Shri Rajnath Singh, Union Home Minister Shri Amit Shah, Union Minister Shri Nitin Gadkari and BJP National General Secretary (Organization) Shri B.L. Santhosh were also present on the dais on the occasion. 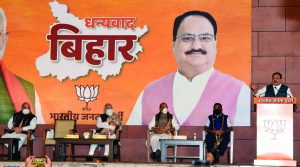 While addressing the party Karyakartas Prime Minister Shri Narendra Modi said that I thank the people of this great land today, the Election Commission, the country’s security forces and the local administration for successfully and peacefully conducting these elections. Defeat and win have their place in the election results, but this process of elections is a matter of pride for every Indian. Therefore, I congratulate the entire nation. He said that it was not easy to conduct these elections during current crisis of Corona, but our democratic systems are so strong and transparent that even in the midst of this crisis they have made the world to recognize the power of India. This election result is also the result of the efficient and effective strategy of Shri Jagat Prakash Nadda, the National President of Bharatiya Janata Party. I heartily congratulate the National President for the impressive victory in Bihar and in the by-elections held in various states across the country.
The Prime Minister said that the Bharatiya Janata Party won in the east, hoisted its flag in Manipur, registered its victory in the West in Gujarat along with victory in Uttar Pradesh and Madhya Pradesh and also got huge success in Karnataka and Telangana in the south. BJP is the only national level party whose flag is hoisted across the country now. We were once limited to two seats but today we are in every corner of India, in everyone’s heart.

The Prime Minister said that many times it is said that issues like bank accounts, gas connections, pucca houses, facilities for self-employment, good roads, good railway stations, better airports, modern bridges on rivers, internet connectivity do not matter in elections. The people are repeatedly telling that such issues are the real issues. He further said that we will take every decision that is in the interest of the country and in the interest of the people of the country. Today, the biggest reason for the affection of the people that the country is showing on the BJP and the NDA, is that the BJP, the NDA has made the development of the country, the development of the people, the paramount goal of our party.


• Today BJP is the only national party in the country in which the poor, dalits, oppressed, exploited, deprived, see their representation, see their future.
• Today, BJP is the only national party in the country which understands the needs of every section of the society and working continuously for them.
• Today, the youth of the country have huge confidence in BJP. If there is any voice of the dalits-oppressed and the exploited, it is the BJP.
• If someone is trying day and night to fulfill the dreams of the middle class of the country, then it is the BJP.
• For the empowerment of women, the party which is being trusted to ensure their dignity and pride is the BJP.
• Whether it is economic reforms, agricultural reforms or security of the country, education, new initiatives in the interest of farmers and labourers, it is the BJP on which the country is relying the most today.

PM Shri Modi praised the efforts made by the karyakartas in Bihar and said, if you ask me today about the Bihar election results, then my answer is also clear like the people’s mandate – the mantra of ’Sabka Saath, Sabka Vikas, Sabha Vishwas’ has won in Bihar. Development works have won in Bihar. Truth lives in Bihar, trust has won! The youth of Bihar have won, the mothers and sisters and daughters have won! The poor of Bihar have won, the farmers have won! This is the victory of the aspirations of Bihar, the victory of Bihar’s pride. I will tell my brothers and sisters in Bihar, you have once again proved why Bihar is called the land of democracy. You have again proved that Biharis are indeed good judges and also aware of the issues. We all BJP Karyakartas, NDA activists led by Nitishji, will spare no effort to realise the resolve of development of Bihar with every Biharwasi.

Shri Narendra Modi said the younger generation of India holds true devotion to democracy. In a strong democracy, he sees opportunities and is more confident of protecting his rights, but unfortunately the network of family parties from Kashmir to Kanyakumari is becoming a threat to democracy. He knows the youth of the country very well. The family parties are the biggest threat to democracy.
The Prime Minister said that our aim should be that the party should be a great platform of opportunity for every worker and every citizen. We have to keep the inner democracy strong in our party. We have to make our party a living example of vibrant democracy. I call upon the youth of the country, they should come forward and join the service of the country through the Bharatiya Janata Party. 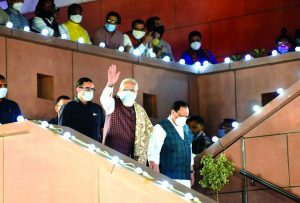 PM Shri Modi also underlined the murder of party Karyakartas and said that in some parts of the country some people feel that they will fulfill their plans by killing the BJP Karyakartas. Those who are not able to face us democratically, some such people have taken the path of killing our party Karyakartas. I request them all earnestly, I do not warn them, and the people will do that work. He further said, elections come and go, but democracy cannot be played by playing the game of death and no one can get votes by playing the game of death, read these words written on the wall.

Speaking on the occasion, Shri JP Nadda said the verdict shows how Shri Narendra Modi government has taken welfare schemes to the masses.

The BJP National President said that I on behalf of crores of Karyakartas of the party heartily congratulate the Hon’ble Prime Minister Shri Narendra Modi for the grand victory of BJP and NDA in Bihar and in the by-elections held in various states across the country and thank him for the immense love and support that the BJP received from him. The Hon’ble PM has done the remarkable task of advancing the country and society with his dedication, untiring efforts and hard work. It is going to give a new vision and direction to the country. It was not only the election of Bihar legislative assembly but also the by-elections that were held in various parts of the country like Madhya Pradesh, Gujarat, Uttar Pradesh, Karnataka, Telangana and Manipur. I thank the great people of the country for the blessings that the people have given to the BJP from Bihar as well as from every part of the country. From Kutch to Ladakh, the people have expressed their support to the works of Hon’ble Prime Minister and the policies of BJP. Under the leadership of Hon’ble Prime Minister Shri Narendra Modi, the Bharatiya Janata Party has been winning elections after elections. It is enough to tell how deep and unwavering trust the people have reposed on the Prime Minister and the BJP.

Shri JP Nadda also said that it was the first major election after the lockdown brought to save the country from Covid -19 pandemic. It was a tough challenge for us too, but everyone from every corner of the country, including Bihar, has supported the lotus with one voice and approved the public welfare policies and development works of the Hon’ble Prime Minister Shri Narendra Modi. When, even the most powerful countries had surrendered before Corona, the Prime Minister, taking timely and bold decisions, not only protected 130 crore countrymen but also united the country to fight against it while bringing reforms and leading the country towards self-reliance. These election results show that all the steps taken by the Prime Minister reached the people and every person standing on the last rung of the society was benefited from these steps, whether it is ‘Aatmanirbhar Bharat Abhiyan’, Vocal for Local, Welfare Package for poor or Garib Kalyan Rojgar Yojana . He said that during the Covid-19 pandemic when all the parties had locked themselves, it was the Bharatiya Janata Party that pledged itself to the service of humanity at the call of the Prime Minister Shri Narendra Modi launching ‘Seva Hi Sangathan’ campaign.

The Prime Minister’s leadership and his untiring efforts were appreciated by the entire world. The Bihar election results have made it clear that the people of Bihar have unwavering faith in the leadership of Prime Minister Shri Narendra Modi.
Praising the special economic package, BJP National President said that the Prime Minister Shri Narendra Modi had announced a special package of Rs. 1.25 lakh crore for the development of Bihar in 2015. In the last five years, as per his promise, he had not only given Rs 1.25 lakh crore to Bihar, but in addition to this he also gave Rs 40,000 crore to the state for other important projects. In Bihar, the double engine government worked day and night for the development of Bihar and the NDA government of the state implemented the development plans of the Hon’ble Prime Minister on the ground. The people of Bihar have also immensely supported the actions and policies of the double engine government of the state in this election.
Shri JP Nadda said that while expressing their deep faith in the ongoing development journey under the leadership of Hon’ble Prime Minister, the people of the entire nation including Bihar chose’ Vikas Raj’ over ‘Gunda Raj’. We are all well aware of the way in which the opposition tried to mislead the people through malicious propaganda by suppressing the facts in the elections, but the people of Bihar accepted the development by denying muscle power and rejecting the ‘Lantern Era’ and accepted the ‘Era of LED’, while rejecting ‘Jungle Raj’, the rule of corruption, people accepted an honest and transparent government in the state.

The BJP National President said that there was a lot of discussion in the Bihar Legislative Assembly elections that ‘Bihar me Ka Ba’ ‘ but the people of Bihar told that ‘Bihar me development Ba’. He concluded by assuring the Hon’ble Prime Minister that every single Karykarta of the party will follow the path shown by him and will move forward unitedly under his leadership for the bright future of India.