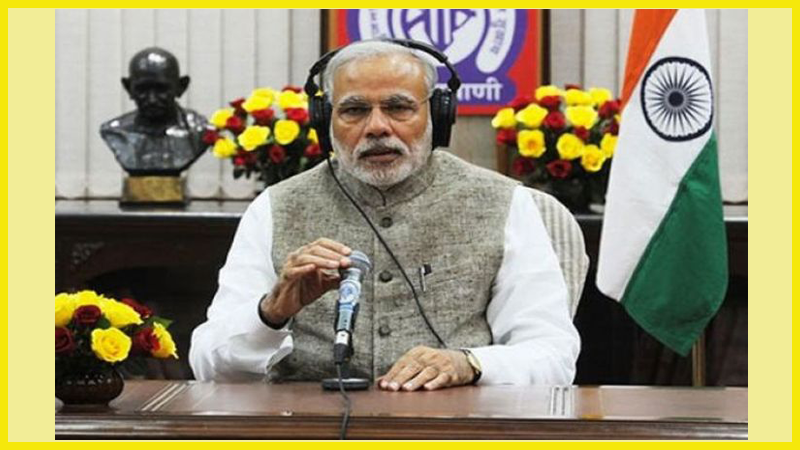 –A few days ago, the country’s beloved poet Neeraj Ji left us forever. Neeraj ji was blessed with a special quality… it was a combination of hope, faith, a firm resolve and self-confidence. Every word of Neeraj ji’s work can instill a lot of strength & inspiration in us Indians. He wrote

–Referring to the college season reminds me of someone I saw in the News recently… how Asharam Choudhury a student from an extremely poor family in Madhya Pradesh overcame life’s many challenges to achieve success. In his maiden attempt, he cracked the Entrance exam for MBBS at AIIMS, Jodhpur. His father earns his daily bread by waste-picking. I congratulate him on his success.

–Any commendable incident from any part of the country infuses my heart with energy and inspires me. And when I mention the glorious journey of these youth, I am reminded of Neeraj ji’s line which sum up the raison d’etre of life. Neeraj ji has said

How I wish to make the sky listen to
the song of the earth
How I wish to inspire every strand of darkness
to come to the radiance of light
And I wish to conquer the might of the sword
With the fragrance of flowers
And to awaken the mountains
with the Sweetness of songs.

–Two IT Professionals from Rae Bareilly Yogesh Sahu ji and Rajneesh Bajpayee ji accepted my challenge and made a unique attempt. With their joint efforts, Yogesh ji and Rajneesh ji have developed a SmartGaonApp by utilizing their professional skills. This App is not only connecting the villagers with the whole world but now they can obtain any information on their own mobile phones. Residents of the village Taudhakpur in Rae Bareilly, village chief, District Magistrate, CDO and every one joined in to create awareness amongst the masses. This App is actually bringing in a Digital Revolution in the village.

–Visiting Vithoba temple in Pandharpur and its grandeur, beauty and spiritual bliss is a unique experience in itself. I request the listeners of “Mann Ki Baat” to visit Pandharpur Wari at least once, whenever they get a chance. Innumerable saints like Gyaneshwar, Namdev, Eknath, Ram Dass, Tukaram are relevant even today in educating the masses. They are imparting energy to fight against superstition in each and every corner across the country. May they be compositions like Bharud (Hkk:M) or Abhang (vHkax), we get a great message of amity, love and brotherhood. We get the mantra to enable the society to fight against blind-faith through devotion and bhakti. These were the people who, at times restrained and corrected the society, even showed a mirror and ensured that old evil traditions get eradicated from the society and that people inculcated a culture of compassion, equality and righteousness. Our mother India is a land full of gems and treasures and the tradition of these great saints that adorned our land are at the same level as the great men who dedicated and sacrificed their lives for our Mother India. One such great man has been Lok Manya Tilak who has left a very deep impression on the hearts of a large number of Indians. We remember and pay our homage to Tilak ji on his birth anniversary on 23rd July and his death anniversary on 1st August.

–Every Indian should have access to good governance and positive results of development. It is the factoring in of this outreach that will create a new India. After 50 years of Tilak’s birth, on the same day i.e. on July 23, another son of Mother India was born, who sacrificed his life so that his countrymen could breathe freely in an atomsphere of freedom. I am talking about none other than Chandrasekhar Azad. Where will you find a young man in India who will not be inspired listening to these lines –

–These lines inspired many young people like Ashfaq Ullah Khan, Bhagat Singh, Chandrashekhar Azad and many others. Azad’s courage and passion for freedom inspired the youth of the day. Chandrashekhar Azad put his life on the stake, but he never bowed in front of the foreign rule. It was my privilege and good fortune that I had the opportunity of going to Chandrasekhar Azad’s native village of Alirajpur in Madhya Pradesh. I had the opportunity to pay homage in Chandrashekhar Azad Park in Allahabad, Chandrasekhar Azad Ji was a brave man who did not wish to die by the bullet of foreigners – he wished to fight for independence as a free man and if he had to die, he wished to remain a free man! This is what was so special about him. Once again, I bow and pay tributes to the two great sons of Bharat Mata – Lokmanya Tilakji and Chandrasekhar Azad ji.

–Just a few days ago, in the Junior Under-20 World Athletics Championship in Finland, India’s brave daughter and a farmer daughter Hima Das made history by winning the gold medal in the 400-meter race event. Ekta Bhyan, another daughter of the country, in response to my letter, has emailed me from Indonesia, where she is now preparing for the Asian Games. Ekta in her e-mail writes – ‘The most important moment in the life of any athlete is that when he or she holds the tricolor and I am proud that I could do that.’ Ekta, we all are proud of you. You have brought glory to the Nation. Ekta has won the gold and bronze medals in World Para Athletics Grand Prix 2018 held in Tunisia. Her achievement is all the more special because she has made the imposing challenges in her life the key to her success.

–Daughter Ekta Bhyan in 2003, lost the use of half of her lower body due to road accident, but this daughter did not lose courage and made herself all the more stronger to perform this grand feat. Another Divyang, Yogesh Qathuniaji, has won the gold medal in the discus throw in Para Athletics Grand Prix in Berlin and in the process bettered the world record, along with Sundar Singh Gurjar who also won the gold medal in javelin. I salute Ekta Bhyanji, Yogesh Qathuniaji and Sundar Singh Ji, all of you for your fortitude and passion, and congratulate you! May you go further than these successes, keep on playing and keep on blooming.