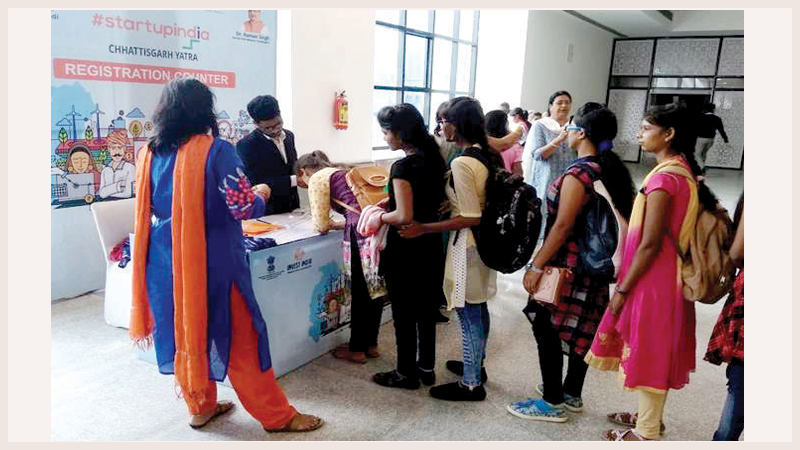 The Startup India Yatra was launched on July 30th in Raipur. Students queued up in large numbers to register for the first boot camp at Raipur. On the launching day on 31st July, the yatra traveled to Bilaspur for the second boot camp at the Government Engineering College in Bilaspur. The Startup India van will also travel to other cities of Chhattisgarh like Korba, Koria, Surguja, Jashpur, Raigarh, Balodabazar, Durg, Rajnandgaon, Balod, Dhamtari, Kanker, Kondagaon, Jagdalpur and Dantewada and hold boot camps in the Government Engineering colleges and Polytechnic Institutes.

Startup India Yatra van is equipped with facilities for individuals and startups to pitch their ideas. The boot camps will include presentations on Startup India and Chhattisgarh Startup Policy followed by extensive ideation workshops. An idea pitching session will be held to select the foremost ideas and Startups. Aspiring entrepreneurs will have to register at www.startupindiahub.org.in to participate in the Yatra.

Startup India Yatra has already been held in Gujarat, Uttar Pradesh, Odisha, Uttarakhand and Madhya Pradesh and now it begins in Chhattisgarh.

To promote job creation in tier 2 and tier 3 towns and cities, Startup India organizes the Startup India Yatra in one state every month. The Yatra conducts boot camps where students are taught lessons in business planning followed by a pitch fest where ideas are invited. Shortlisted business ideas get incubated in State run incubators. A total of 19,000 students across 40 districts have benefitted from the Yatra through the boot camps, with over 90 received grants or incubation offers from the State governments.

The Startup India initiative of the Government of India envisages to build a robust startup ecosystem in the country for nurturing innovation and providing opportunities to budding entrepreneurs. In tandem with this mission, the program has been able to gather registration of 10,999 startups, generating employment to 1,09,869 people.