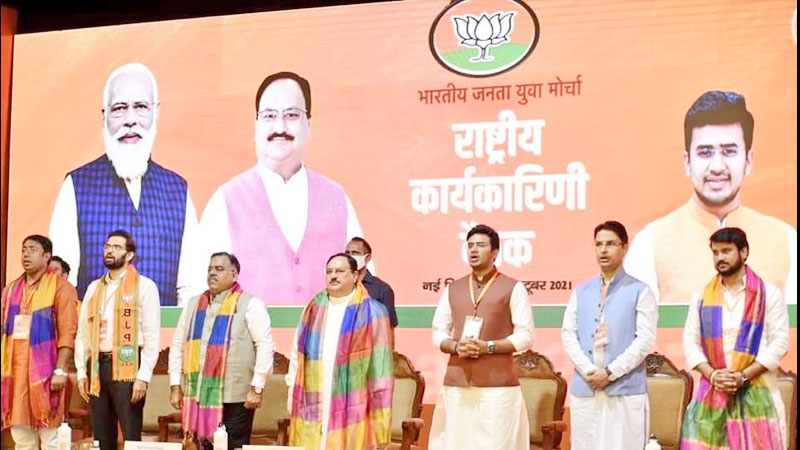 Addressing the BJYM National Executive Meeting Shri JP Nadda said, “Youth is an institution of change and a catalyst of change”. He lauded the endless tasks undertaken by the Yuva Morcha karyakartas under the leadership of Shri Tejasvi Surya at grass-root level throughout India during the difficult times of Covid pandemic.

Shri Nadda said, “While other political organisations went under isolation, our BJYM workers were on the streets helping common people and the needy in the hour of crisis”.

Shri Nadda emphasized on the importance of regular introspection by each karyakarta. He said that BJP is the only organisation in the country which has rejected politics of caste, nepotism, appeasement and corruption. The policies and welfare schemes of central government reflect the concept of inclusive development for all section of the societies under the leadership of PM Shri Narendra Modi. It becomes the duty of every BJYM karyakarta to ensure that each of these schemes are being implemented efficiently at the ground level.

BJP National President encouraged the youth members and asked them to understand the importance of staying politically and socially relevant. He said working with ‘innovative thoughts’ and working for India’s growth should be our goal, while we prepare for the mission 2047. In BJP “Every leader is a worker and every worker is a leader’. We do not order or dictate, rather we involve our karyakartas to work for the organisation and serve Bharatmata. BJP National General Secretary (Organization) Shri BL Santhosh guided the youth karyakartas to work for the organisation and said it is important for every karyakarta to believe in our ideology. We all are co-travelers on the path of our ideology. We are witnessing record vaccination all over the country by Central Government which is itself a great achievement.

National General Secretary and BJYM In-charge Shri Tarun Chugh recalled his days when he himself was in Yuva Morcha and encouraged youth karyakartas to work in a positive direction to realise the vision of 2047. Digital Revolution will realise the dream of 2047, which we are drafting today at this national executive meeting. He said that every BJP worker is Nation’s Chowkidaar. He said it is vital that we have actual youth in the Yuva Morcha unlike other political organisations. It will be your Karma, which will take you forward in the organisation.

BJYM National President Shri Tejasvi Surya said the BJYM is the youth wing of the largest political Organisation of the world and it is today at the forefront of all important youth-centric political issues in the country. The BJYM is consistently promoting the good work of Modi Government. India is on the right path under the dynamic leadership of PM Shri Narendra Modi and the BJYM will stand by and aid the PM in achieving his vision of a New India.