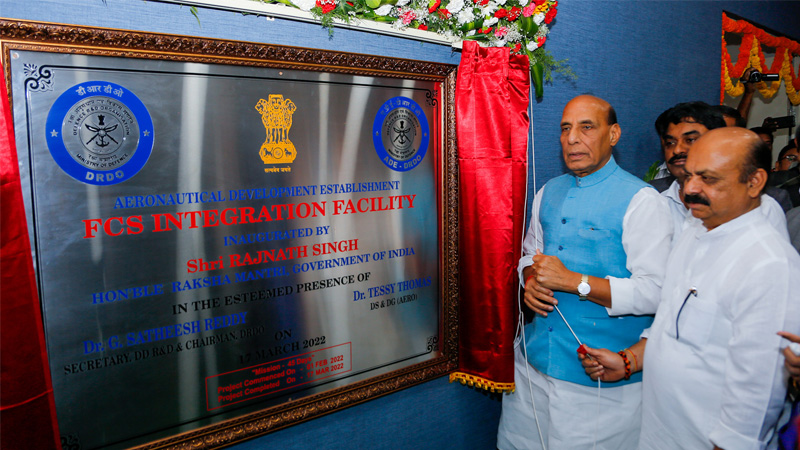 Raksha Mantri Shri Rajnath Singh inaugurated a seven-storeyed Flight Control System (FCS) Integration facility at Aeronautical Development Establishment (ADE), a laboratory of Defence Research and Development Organisation (DRDO) in Bengaluru, Karnataka on March 17, 2022. The state-of-the-art complex has been constructed in record 45 days, with in-house hybrid technology consisting of conventional, pre-engineered and precast methodology. The technology has been developed by DRDO with the help of M/s Larsen & Toubro (L&T). Design check and technical support has been provided by the teams of IIT Madras and IIT Roorkee.

This FCS facility will support Research & Development (R&D) activities for developing Avionics for Fighter Aircraft and FCS for Advanced Medium Combat Aircraft being undertaken by ADE, Bengaluru. The Raksha Mantri said it is a unique project not just in the country but in the entire world and is an embodiment of the new energy of New India. “This energy is of technology, commitment, institutional collaboration among public sector, private sector & academia and above all of ‘Aatmanirbhar Bharat’ as envisioned by Prime Minister Shri Narendra Modi,” he said, exuding confidence that the facility will go a long way in bolstering national security. The complex will also provide simulator training to the pilots of combat aircraft. Shri Rajnath Singh described it as one of the most important components of the complex. The simulators provide an opportunity to learn by making mistakes without the possibility of any kinds of losses, he stated.