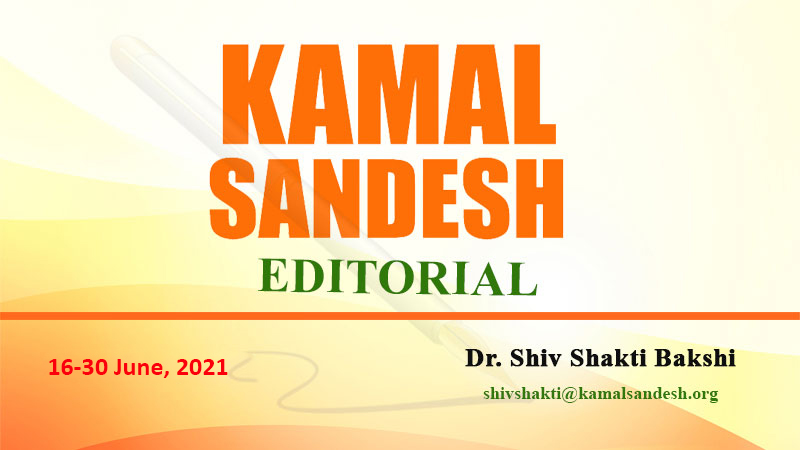 The announcement made by Prime Minister Shri Narendra Modi that the union government will provide free vaccines also for 18+ people has further reassured the nation about the smooth conduct of vaccination drive across the nation. It is to be noted that the Modi government is successfully conducting free vaccination drive for 45+ people and the vaccination for 18+ population was earlier decentralized as per the demands made by some states. While some states could not effectively launch vaccination drive in their states and showed inability in procuring vaccines for their states, their commitment to fight against Covid-19 pandemic became doubtful. As BJP governments in various states had already announced free vaccination for the people, many other states continued to depend on centre for their vaccination programmes. The resulting confusions and doubts have been effectively addressed by the Prime Minister with his announcement of taking responsibility of providing free vaccines for 18+ people also, in addition to 45+ people in the country.
In his address to the nation, Prime Minister Shri Narendra Modi has also announced the extension of Garib Kalyan Anna Yojana (PMGKAY) for 80 crore people upto November. This scheme has not only provided food security to a large part of the population, it has also enable the poorest of the poor to join fight agasint Covid-19 pandemic without panicking during various lockdowns. The PMGKAY of the Modi government in providing 5 kg food grains, 1 kg pulses and other necessities to 80 crore people across the nation has been rated as highly successful in containing the pandemic and empowering the poorest of the poor in the time of this global crisis. Its further extension in the wake of second wave of the pandemic by the Prime minister has reassured the people that under the leadership of Shri Narendra Modi, India is prepared to face any adversity and is confident of emerging victorious against all odds.
In another major decision, Prime Minister Shri Narendra Modi has announced many reliefs under ‘PM-CARES for children’ scheme for the children who lost their parents or legal guardians/adoptive parents to Covid-19. The scheme covers the educational expenses and provides a corpus of Rs. 10 lac for each child when s/he reaches 10 years of age. It also supports higher education and health of every such child. In addition to this, the government has also announced various supports to the families who have lost their earning members. The Covid-19 pandemic has brought untold miseries to many families across the world and in India many lives were lost leaving behind many dependents with uncertain future. While nation is standing in solidarity with these families, the Modi government is taking many initiatives to provide reliefs to the affected families through its caring and sensitive approach.
While the world’s largest and fastest vaccination drive is gaining momentum with every passing day in India, the nation is proud of its scientists and researchers who have strengthened the fight against Covid-19 pandemic by preparing not one, but two Covid-19 vaccines. While many more vaccines are under trail stage, the vaccines for children are also being prepared creating another milestone for the nation. India is proud of its doctors, nurses, medical staffs, lab technicians, administrative staffs and Corona warriors for successfully waging a spirited war against the pandemic. The ‘Seva Hi Sangathan – 2.0’ campaign launched by the BJP karykartas on the call of BJP National President Shri Jagat Prakash Nadda has provided relief to millions of people across the nation. While free vaccination drive is gaining pace, India is moving towards a decisive victory against the Covid-19 pandemic.