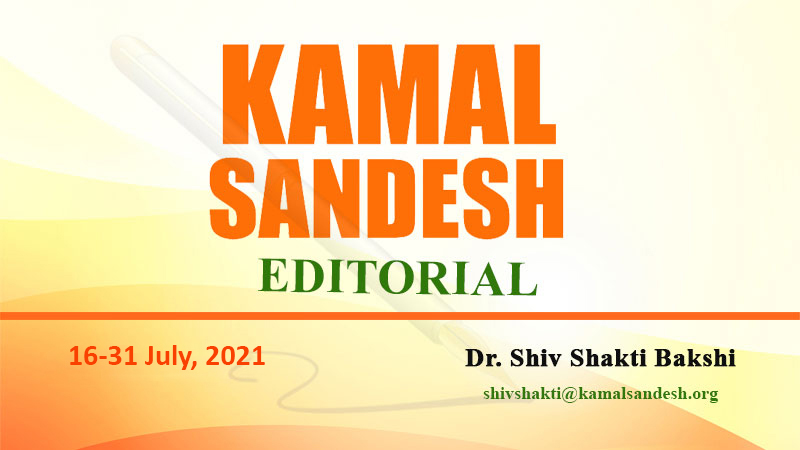 The expansion of Modi-2.0 cabinet has undoubtedly infused new energy, dynamism and determination in the nation to move forward with the confidence. As in the first expansion of the Modi-2.0 cabinet 43 new faces have been included, new blood instilled in the government is set to further speed up the government efforts in meeting the challenges posed by the Covid-19 pandemic. In an all inclusive ministry, 11 women including two cabinet berths show Prime Minister Shri Narendra Modi’s commitment to widen the role of ‘Naari-Shakti’ in governance. At the same time, while the average age of the ministry is 58 years, 14 ministers including six in the cabinet are below 50 years of age. Drawing expertise from various walks of life, the ministry includes 13 lawyers, six doctors, five engineer, seven civil servants, seven PhDs and three MBAs. Under the charismatic and visionary leadership of Prime Minister Shri Narendra Modi, inclusive, youthful ministry along with inclusiion of ‘Naari Shakti’ will definitely take India to newer heights.
In a landmark decision, cabinet chaired by Prime minister Shri Narendra Modi has approved “India COVID 19 Emergency Response and Health Systems Preparedness Package: Phase II” at a cost of Rs 23,123 crore. It will further speed up the health infrastructure including paediatric care with focus on early prevention, detection and management of diseases. It will further equip the nation in handling any eventualities which may emerge in the wake of Covid-19 pandemic and for such crisis in future. The Modi government is committed to double the farmers’ income and for this many historic steps have been taken which are yielding brilliant results. In another landmark decision, the cabinet has also approved modifications in Central Sector Scheme of financing facility under ‘Agriculture Infrastructure Fund’ which may generate huge investments in agriculture sector benefiting the marginal farmers the most. It will help in creating an ecosystem for post harvest crop management which strengthening the APMCs across the country.
The world’s largest and fastest free vaccination drive is creating new records every day. As the vaccination drive reaches its 175th day, more than 37 crore doses have been administered till 9th July 2021. The drive is successfully gaining momentum in most of the states with eight states administering doses to more than 50 lac people in the age group 18-44. It is to be noted that Modi government had earlier taken responsibilities of vaccinating the people of age group 45+ with states slated to share the responsibilities of 18-44 age group. While the BJP ruled states were committed to give free vaccines to its people, some states showed their inability to procure vaccines. Consequently, Prime Minister Shri Narendra Modi took the responsibility of vaccinating people of 18-44 age group also and a new drive was launched on 21st June 2021. Now people across the country are assured of getting vaccines and they are participating in the vaccination drive in large numbers.
The nation is fighting the Covid-19 pandemic under the dynamic and determined leadership of Prime Minister Shri Narendra Modi on various fronts. While Covid-19 pandemic has not even spared the most developed nations of the world, the united spirit of the people of India has withstood the crisis with unprecedented patience and fortitude. In such trying times, a section of opposition led by Congress has tried to create panic and break the morale of the nation. It is highly unfortunate that for Congress politics was prioritised at the cost of the life of the people. While the nation is fighting the pandemic and every crisis with indomitable courage, the expansion of the cabinet will definitely give new dynamism, momentum and speed to the government.