hether comparisons are ‘odorous’ or not, only Dog-berry, a character from “Much Ado About Nothing” and his creator Shakespeare were likely to know. But the common experience is that comparisons are at times certa¬inly odious. An admirer of Deendayalji writing on Mahatma Gandhi, Dr. Lohia and Pandit Deendayal Up¬adhyaya, was constrained to admit:

“It is not with any spirit of comparison that I link the name of Deendayalji with that of Mahatma Gandhi, the greatest man of the century, or that of Dr. Ram Manohar Lohia, the renowned thinker and revolutionary leader. I am only trying to lay bare the truth that no one except these three. tried to give an ideological orientation . . . to Indian Political life.” 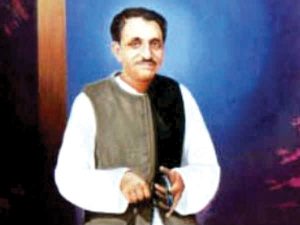 Bracketing Deendayal’s or for that matter. Lohia’s name with that of Gandhi is likely to strike some persons as sacrilegious. Deendayal was so humble and unassuming that he himself would have brushed aside any direct or indirect hint that he was anywhere near Gandhiji in political or spiritual stature. Lohia was a great admirer as well as a critic of Gandhi. But once after criticizing him for his Rajkot fast, Lohia said:

“If I venture to talk of Gandhiji in this way, it is only because / look upon him as a man who comes once in ten centuries.
Gandhi’s was indeed an extraordinary personality. Many eminent non-Indians, among them Rornain Rolland, Albert Einstein, E.M. Forster or Arnold Toynbee had testifi ad to Gandhi’s greatness. One Western admirer described him as “the greatest Indian since Gautama the Buddha and the greatest man since Jesus Christ I”.

This disclaimer of any suggestion of an attempt at equating Gandhi on the one hand with either Lohia or Deendayal on the other, was necessary. For, the very juxtaposition of the names of these three eminent men, even in the title of an essay, might lead to misunderstand-ing. Otherwise, because comparisons are generally odious, they should be avoided as 101 00 possible. They are almost always unfair to the lesser of the two great personages compared.

Every single aspect of Gandhi’s private or public life was based on deep consideration of the correctness or otherwise of the behaviour or the course of action adopted. He was conscientious in small matters and a meticulous observer of self-imposed vows. He never smoked or drank tea. He ate simple food without salt, chillies or condi¬ments. He never missed his prayers. He observed celibacy for more than four decades before his death. His experi¬ments in brahmacharya (celibacy) during the last phase of his life were so unorthodox, that these alone would place him in a very extraordinary category of saintly innovators.
As for ‘Plain living and high thinking’, both Lohia and Deendayal easily made the grade and could be compared favourably with Gandhi. All the three were sincere, earnest, painstaking and self-less. Gandhi was not a scholar, but he was much more than that. He was a seer, whose intuitive thoughts on many problems and issues before mankind, have over the years proved prophetic. Lohia was an erudite scholar, unorthodox thinker and actionist. Deendayal was a great organizer and deep thinker. Gandhi had come in contact with the Western civilization quite early in his life. Lohia had earned his doctorate from a German university and had travelled widely all over the world. Deendayal once did get an opportunity to travel to the U.K. and the U.S.A., but his direct knowledge of Western communities and the experience of living amongst them, aces limited. But he made up this lacuna in his knowledge by extensive reading.

Both Gandhi and Deendayal were somewhat traditiona-lists, though the former was in many respects a radical reformer and innovator. Lohia was a rationalist and icono-clast. Gandhi had, on principle, renounced political power and hence he never thought of becoming the President or the Prime Minister of India. His was a unique example in the history of the world. Labia was for some time a member of the Lok Sabha, while Deendayal had lost an election to a parliamentary seat in U.P. in 1963. But both were equally disinterested in securing political power or office for personal gain.

None of these three eminent persons could be con-sidered handsome and their physical stature was also not impressive. As far as their personal status was concerned, Gandhi was a married man who had, from 1904 onwards till his death, observed celibacy, Lohia could be described as an unmarried person, while Deendayal was a bachelor who believed in the traditional values of the Hindu faith. One remarkably common feature of their lives was their unnatural deaths. Both Gandhi and Deendayal were murder¬ed while it is reported that Lohia died as a result of unpar¬donable negligence after a prostate operation by the doctors at the Willingdon Hospital in New Delhi in 1967. He was then 57 years of age, while Deendayal when murdered was only 52.

Anecdotes about Gandhi illustrating some unique characteristic of his are legion. That with a view to abolis-hing untouchability, he sometimes used to undertake scavenging himself is well known.

Gandhi once went to Simla to have an important meeting with the viceroy. He did not forget to send a co-worker to see the bhangi quarters there. When infor¬med that they were not fit even for animals, he said;

“Look at a bhangi as he eats his food, cowering under the shadows of the latrine wall surrounded by filth. It is enough to break one’s heart.”

A foreigner once asked Gandhi : “If you are made the Viceroy of India for a day, what will you do?”

Gandhi said : “I shall clean the Augean stables of the scavengers near the Viceroy’s house.”

“Supposing your term is extended a day more, then?”

“The very same work shall I do the next day,” was his quick reply.

Lohia also used to narrate many anecdotes of Gandhi. In probably 1946, Gandhi was holding consultations with the Congress Socialists about the problem of partitioning India into two sovereign states. At the end of a morning walk, Gandhi asked Lohia to meet him again the same evening, The latter eagerly went to see him. But to his surprise, instead of discussings politics, Gandhi opened the topic of cigarettes, tea and coffee! In one of his reminisc¬ences, Lohia says:

“I used to smoke too much and to drink a lot too much coffee and tea. Gandhiji went on a long disser¬tation on how ruinous these habits were. ..He said, as a Socialist, I must identify myself with the poverty-stricken countrymen …”

But Gandhi used to like Lohia. He supported hint when the latter was arrested in Goa by the Portuguese authorities for initiating the campaign for civil liberties in 1946, “Gandhi had begun to like me,” said Lohia later,” and, ‘therefore, he assumed that my acts would be more good than evil.” Unlike Deendayal or Gandhi who spoke softly and gently. Lohia had a sharp tongue. He not only did not spare Nehru, but Gandhi also. He himself has con¬fessed that “Often, as I talked to Gandhiji, all the violent, rough and sharp language used to come out of nne.” And yet Lohia was a kind-hearted man. He came to believe in non-violence after 1942, though it had not become an inalienable part of his creed. But he abhorred cruelty, especially in respect of dumb animals. Once a woman colleague of his came to him to plead for launching a movement for prevention of cruelty to animals. She was herself a non-vegetarian. Almost in the style of Gandhi, Lohia asked her as to why she did not herself give up meat-eating! He then went on to describe hone in a Calcutta rnarket, tortoises are sold. As the customers arrive, he said, limbs of live tortoises are cut off one by one and sold to them. The poor creature is all the time writhing in agony!” he added.