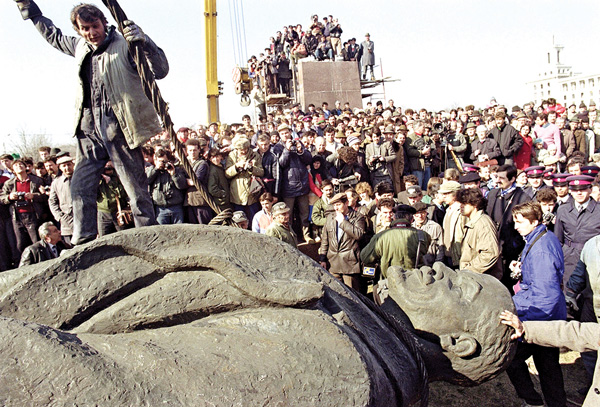 Acentenary has passed unnoticed without any visible celebration. The events in Russia, which shook the entire world in 1917, appear to be forgotten in public memory in 2017. The pretentious claims of the Russian Revolution today remain shrouded in silence with even its ardent supporters preferring to avoid any marked celebration. There is a realisation that the Soviet Union, showcased as a model by Communists across the world, suffered from ‘ideological deviations’ and had ‘distortions’ in building socialism, resulting in its failure. The pulling down of the statue of Lenin in Russia and other parts of erstwhile the Soviet Union not only symbolises the open manifestation of people’s anger against Soviet atrocities but is symptomatic of the devastations wreaked on the populace it ruled.

What was seen as an event of enormous significance holding out the promise of transforming the world order, has now turned out to be hollow promises of civil liberties, equal rights and democracy which submerged Russia in instability, extremism and political terrorism. Most of the communist states, which sprung in different parts of the world as a result of this revolution, have crumbled under the weight of their own contradictions. While the communist states indulged in mass killings of their political opponents, they also sought to uproot societies and wreck their economies, killing millions in the process. Saying that Bolshevism was the greatest human slaughter of all time, renowned Nobel laureate Aleksandr Solzhenitsyn while recounting the horrors, concludes that millions perished between 1918 and 1957 in Gulag slave camps in Russia. After colonialism, communism, like fascism, proved to be one of the biggest disrupters globally, leaving nothing much to celebrate in its name.
As elsewhere in the world, in India, too, the Communist Party acted on the dictates of ‘Comintern’ and tried to sabotage the 1942 Quit India movement, rationalised the Muslim League’s two-nation theory and when independence dawned on the nation, they called it a sham and launched an armed struggle.

Unlike the Socialist Party led by the likes of Lohia and Jaiprakash who believed in nationalism, the communists believed India to be a conglomeration of various nationalities while showing deep contempt for mainstream Indian thoughts. They went to the extent of rationalising and supporting Chinese aggression on India in 1962. Although they were able to register electoral victories in few states and became a strong factor in Parliament, they now appear to be standing on their last leg. When a bleak future stares at communism in India, even thinking about celebrations may appear out of sync in the current scenario. While the collapse of Soviet Union falsified the claim of a model state, repeated defeats in West Bengal robbed the communists further of anything worth achievement. It is an irony that in the state where communist parties of different shades were able to form a front and wrest power in the name of land reform and working-class movement, they now find themselves ousted due to a peasant movement. West Bengal, which was at the forefront at the time of independence declined in almost all developmental parameters under the Left Front rule. The long spell of Left Front rule in West Bengal is mainly attributed to its complete stranglehold over state machinery through a network of party cadres deployed in crushing opposition and booth rigging in contravention of the democratic ethos.

While West Bengal seems lost forever for the communists, they can still find solace in their hold over Tripura and the 2016 election victory in Kerala. As Tripura remains steeped in poverty, violence by its cadres in Kerala has maligned its image throughout the country. The coming of LDF in power in Kerala has seen a rise in political murders and brutal attacks on BJP-RSS activists resulting in killings even in CM Pinarayi Vijayan’s home constituency. The Janraksha Yatra launched by BJP President Amit Shah against the murders and violent attacks on BJP-RSS activists by Communists witnessed large participation, throwing a challenge to the LDF rule.

Even after a hundred years of failed experimentations and trials, threats posed by some communist regimes appear real for world peace. As North Korea tests a hydrogen bomb, the heat of imperialistic ambition of China is continuously felt by its neighbours. The Naxal-Maoist violence in India poses threats nothing less than other terror groups operating in the country with foreign backing. The Russian revolution which started with a bang, raising expectations of an alternative world order and promising a challenge to capitalism, finally ended in a whimper. In this whimper can be seen the shattering of the faith of common people who had to face the atrocities of the dictatorial communist regimes. The silence of the communists on the centenary of the Russian revolution is indicative of their inability to commemorate an event which has falsified their claims and exposed them to the world. The compulsion to remain silent is a resounding slap on their face.