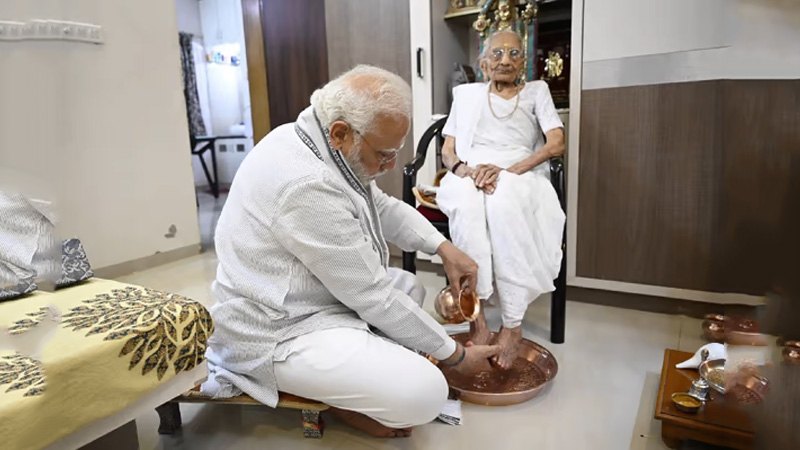 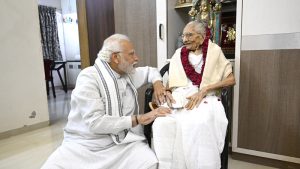 The struggling and virtuous life of Hira Baji is always an inspiration, her affection and truthfulness gave the country a successful leadership. The loss of Mother is irreparable; there is no way to fill this void.

I humbly offer my respectful obeisances at the feet of the Triveni Mother of Simplicity, Austerity, and Karma. May God give strength to the Prime Minister and his family members and give a place to the pious soul at his holy feet. Om Shanti!”

Heera Ba’s demise creates a void that is impossible to fill: Rajnath Singh

“I am deeply pained by the passing away of Hira Ba, mother of Prime Minister Shri @narendramodi. The death of a mother leaves such a void in one’s life that is impossible to fill. I express my condolences to the Prime Minister and his entire family in this hour of grief,” Shri Singh said in a tweet.

Sacrificial ascetic life of Heera Ba will always be in our memory: Amit Shah

In tweets Shri Shah said, very sad to know about the demise of the Prime Minister’s mother. A mother is the first friend and teacher of a person’s life and the pain of losing a mother is undoubtedly the biggest pain in the world.

“The struggles faced by Heera Ba to nurture the family, her sacrificial ascetic life will always be in our memory. The entire nation stands with Prime Minister Shri Modi and his family in this hour of grief. The prayers of crores of people are with you. Om Shanti.”

The Prime Minister Shri Modi informed through Twitter about the demise of his mother. He tweeted,

“A glorious century rests at the feet of God… In Maa, I have always felt that trinity, which contains the journey of an ascetic, the symbol of a selfless Karmayogi and a life committed to values,” the Prime Minister posted a heartfelt tribute informing about his mother’s demise.

Tributes poured in after the demise of PM Modi’s mother. Leaders from all parties and citizens from across the country expressed their condolences on the demise of the great mother. PM Shri Modi arrived in Gujarat early on December 30, 2022 to perform the last rites. Her final rites were held at Gandhinagar’s Muktidham crematorium.