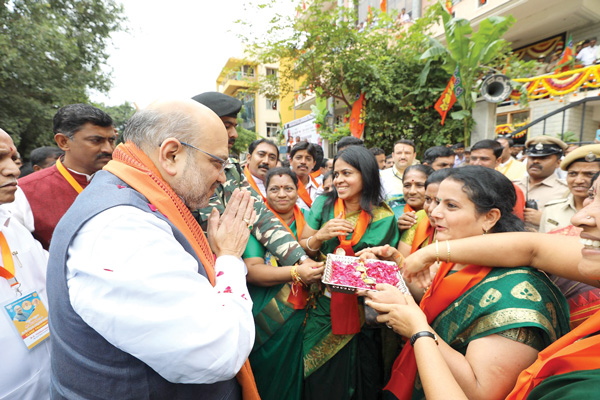 The BJP National President Shri Amit Shah arrived in Bengaluru on a three-day Pravas of Karnataka starting from 12 August, 2017. He was received by a large congregation of BJP karyakartas, supporters and the top leadership of the party’s state unit.
Shri Amit Shah, who made a brief address to the gathering, said the goal of BJP is to rid the country of Congress. Shri Shah and his entourage left for the party office in Malleswaram to start the meetings. Shri Shah was accorded a rousing reception by BJP workers.
During his stay Shri Shah has conducted a detailed analysis of the political and social situation in Karnataka. He met party functionaries of various strata and members of different wings of BJP. Apart from meetings party members, he also addressed a gathering of intellectuals to give a clearer idea of ‘what BJP stands for’. In all, he took part in 25 meetings before his departure.
Inaugurates Nanaji Deshmukh Library
BJP President Shri Amit Shah visited the party head office in Bangalore and inaugurated the Nanaji Deshmukh Library and E-library at the head office.

Addressing the party karyakartas Shri Amit Shah said that the party stood united and would return to power in the Assembly poll next year under the leadership of Shri BS Yeddyurappa Ji. “Friends, our party stands united, and is geared up to take to the electoral battlefield under the leadership of Yeddyurappaji in the coming days, and see to it that we form a BJP government in the state,” Shri Shah told party workers near the Airport.
He said the people had decided to vote the BJP to power as the party had been exposing the “corrupt, polarizing and oppressive” rule of the Congress over the past five years.

“I am hopeful that the way the party, for the last five years, has been fighting against the corrupt, oppressive and polarizing rule of the Congress, the people of this great state of Karnataka have decided to vote the BJP to power,” he said.

He said when Prime Minister Narendra Modi’s ‘Vijay Rath’ will reach Karnataka in next February-March party workers should be ready with their quest to make inroads into the southern India by winning the Karnataka Assembly poll.

Stressing the importance of Karnataka for BJP nationally, he said victory in the Assembly polls should again open the road to South India for the party, like it did in 2008. “The BJP has won most of the polls since 2014. When the Vijay Rath of Narendra Modi comes rolling to Karnataka, workers need to be ready to make inroads into southern India by winning Karnataka,” he said.

BJP National President Shri Amit Shah on 13th August 2017 launched a direct attack on Chief Minister Siddaramaiah, for his most corrupt governance. Addressing a select audience of the intelligentsia he said, “Throw out the Siddaramaiah government. Its ministers get raided and get caught but they are not asked to resign. This will never happen in our party.” Shri Shah also said a record amount of money was being allocated to the state for various schemes. “We have 106 schemes. But you people from Karnataka have nothing to cheer about as your government will not allow any of these programmes to reach you. Ask Siddaramaiah where all the money is going, because no one in this state is receiving this money. I am asking this government to give an account of the money,” he added.

He said despite receiving increased allocation under many programmes, the state government constantly complained that the Centre was not giving them any money.

He said Congress was built almost like a club and had no ideological underpinnings like the BJP. “Congress was a special purpose vehicle built for gaining independence and it did not have any ideology or stream of thinking. When we got Independence, Nehru decided that everything Indian was obsolete. But we think our past should be modified by time and we need to rebuild the country and not build a new country from scratch based on thinking by the West,” he said.

BJP President Shri Amit Shah, who was in the State to strengthen the parties’ organizational structure, on 14 August, 2017 visited the Adichunchanagiri Mutt at Bellur in Mandya district, a major religious centre for the Vokkaliga community.

Minutes after his arrival, Nirmalanandanatha Swami, seer of the mutt, said the mutt “will not involve itself in any political activity even though it offers blessings to politicians who visit”. He added that Shri Shah’s visit was planned almost two years ago.

The BJP president was accorded a rousing reception when he arrived at the mutt, with the seer himself welcoming him. Shri Shah visited the Sri Kalabhairaveshwara Temple and the samadhi of Balagangadhara Natha Swami on the mutt premises. He also released a book titled ‘The Story of Guru’ on Balagangadharanatha Swami.

Later, he addressed the students of Adichunchanagiri Institute of Medical Sciences (AIMS) on the occasion of their graduation day. He also made a reference to ‘Nada Prabhu’ Kempe Gowda, the founder of Bengaluru, while addressing the gathering at the mutt.

He commended the great job done by the mutt in offering education, shelter, food, healthcare, and cattle protection. He described its efforts as much better than those of any State government.

Presiding over the core committee meeting and at the Political Affairs Committee meeting on the last day of his visit Shri Amit Shah told the members that all party wanted was results and not suggestions.

Reeling out statistics, he said the party had enrolled 87 lakh new members during the drive in Karnataka but wondered how many of them were in touch with the party office? Only 57 lakh members could be contacted, the remaining 30 lakh could not be reached, he disclosed.

He said leaders would have to contact the 57 lakh members and track the missing 30 lakh. Each MLC should adopt an Assembly constituency and each MLA a neighboring seat, where he/she should ensure the party’s victory.

The party won 79 seats in 2004, with 87 lakh votes, which went up to 94 lakh in 2008 when it won 110 seats. It was therefore no easy task securing the required votes to win a comfortable majority, he reminded the leaders.