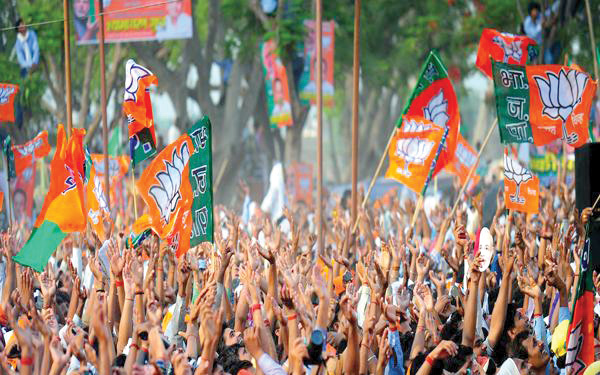 BJP performed well and got 25 seats in the urban and local body elections in Madhya Pradesh, whose results were announced on 17 August, 2017. While BJP came out unscathed, Congress retained some of it’s seats but lost Dabra, in Jyotiraditya Scindia’s pocket borough, by a whopping 10,000 votes.

Chief Minister Shri Shivraj Singh Chouhan congratulated the Karyakartas and said it is people’s blessings for which party has performed very well.
Madhya Pradesh BJP President Shri Nandkumar Singh Chouhan said the victory is a gift to party National President Shri Amit Shah who is doing everything to strengthen the party organisation in the grassroots level.

He said, “The Congress’ claims that farmers’ agitation and problems of tribals will help it make a clean sweep proved wrong. The wave of Chief Minister Shri Shivraj Singh Chouhan restricted Congress stalwarts to their own areas,” Shri Singh said. BJP got 25 seats despite the fact that Election Commission deferred voting in Barwani and Dhar due to agitation by some groups. BJP grabbed more seats than it did in the previous election he said.

In the recently completed civic elections in West Bengal BJP gained ground and came second after the ruling TMC. However, the Left Front and Congress got obliterated from the State’s electoral map. The BJP won six seats, including four in Dhupguri and one each in Buniadpur and Panskura, while the Left parties managed to win only one seat at Nalhati and the remaining seats were pocketed by the State ruling outfit.
Elections were held on 13 August to Durgapur, Haldia, Panskura, Nalhati and Cooper’s Camp in South Bengal and Buniadpur and Dhupguri in the northern part of the State.

Congratulating party workers for bagging the second position in the polls BJP State President Shri Dilip Ghosh said, ”The results itself show how the TMC has won the elections with money and muscle power. Despite that we have fought them bravely and proved to the people that only the BJP can give them an alternative.”

The BJP has added yet another big municipal corporation to its kitty as the party registered a landslide victory in the Mira-Bhayander municipal poll in Maharashtra. BJP bagged a whopping 62 out of the 95 seats. The Shiv Sena was way behind at No. 2 position with 22 seats. This is the second big victory in the municipal polls for the BJP after a thumping win in the Panvel Municipal poll. The BJP that was in power in the Mira-Bhayander Corporation with Shiv Sena doubled its tally from 31 to 62. Maharashtra Chief Minister Shri Devendra Fadnavis congratulated party workers after the victory.