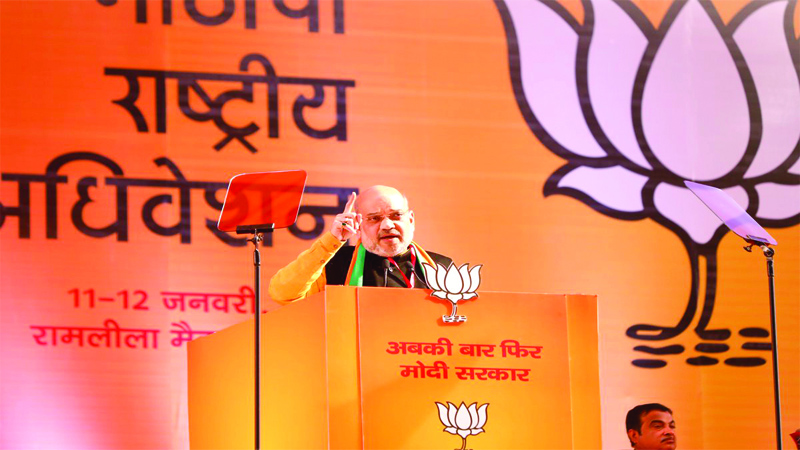 Addressing at the inaugural session of the two-day BJP National Convention held at Ramlila Ground in New Delhi on 11-12 January, 2019 while describing Prime Minister Shri Narendra Modi as the most popular Prime Minister since independence, BJP National President Shri Amit Shah exhorted the delegates attending the national convention to take a resolve and vow to re-elect the Prime Minister with a bigger mandate in 2019.

Shri Amit Shah in his inspirational address stated that a victory in 2019 for the BJP is also important for 50 crore poor people of this country, for the youth and for women who have suffered neglect under previous Congress dispensations and have not had access to even basic needs. For over 70 years people waited for a leader who would Make India great and Shri Narendra Modi had arrived to fulfill that desire.

We are publishing the Salient points of the Presidential address for our esteemed readers.

In the last week alone, the government of Narendra Modi ji has taken two major decisions that have massive implications for future. The first of these two decisions was providing 10% reservation for the poor from the upper castes in education and jobs. Prime Minister has got it cleared in the Cabinet and parliament in a manner of less than one week to fulfill the aspirations of crored of upper caste youth in this country. In my view, the 124th amendment to the Constitution giving reservation to the upper caste youth is one of the most significant amendments to the constitution since it was framed.

The second major decision of the government under the leadership of Narendra Modi ji is simplification of the GST and the relief given to the small traders and manufacturers. As per this major decision, small traders and manufacturers with turnover upto Rs.40 lakh are exempt from registration under GST. Likewise, the turnover limit for coverage under the composite scheme has been increased from Rs.1 crore to Rs.1.5 crore.

He called upon the entire parliamentary board of the Bharatiya Janata Party to join him in congratulating and complimenting the prime minister for the truly historic decisions in the last one week.

Recalling the contributions of Shri Atal Bihari Vajpayee the BJP President stated that this is the first national convention of the BJP when Atal ji is not alive. Atalji provided leadership to the BJP from the Jan Sangh days and recalled how Atal-Advani duo strived to take the BJP to every corner of the country and in establishing it as a national party. Though there is a vacuum after the demise of Atal ji he would always remain with the people and the party as it pursues his goals.

Highlighting the significance of Ramlila Maidan as a venue where the party had resolved to secure a win in 2014 and the venue where the first rally to end the undemocratic Indira Raj after the imposition of emergency, Shri Amit Shah stated that 2019 would also become a significant milestone at the venue for securing outright majority for the BJP.

Shri Amit Shah emphatically stated that a victory in 2019 for the BJP is also important for 50 crore poor people of this country, for the youth and for women who have suffered neglect under previous Congress dispensations and have not had access to even basic needs. For over 70 years people waited for a leader who would make India great and Shri Narendra Modi had arrived to fulfill that desire.

Highlighting that the so-called Opposition Alliance has neither a leader nor any positive agenda, he said that the 2019 electoral battle will have an impact that would last for centuries. Underscoring the importance of 2019 battle, Shri Shah drew a parallel with the Great Maratha rulers in pre-British era who won 134 battles but a defeat in Panipat third battle had brought in the British Raj which subjugated India for 200 years.

Recalling the 2014 verdict the BJP national president said the people of this country have given an outright majority to a government after a gap of 30 years. He further stated the BJP was in power in only 6 States when the party secured a majority in 2014 while at present the party is in power in 16 States. Further, he said, the membership of the BJP has risen from 2.4 crores in 2014 to 11 crores at present. Once the party scores a victory in 2019 the party would expand its influence and become a dominant party even in the south of India going as far as Kerala, he added.

Stating the there is no leader to rival the popularity of prime minister Shri Narendra Modi, Shri Shah said that the BJP’s victory in 2019 was certain as the people of the country are with the BJP under the leadership of Shri Narendra Modi. Highlighting the desperation of the so-called grand alliance the BJP President said that the politics is not just arithmetic or physics but produces chemical reactions. Referring to the alliance between Samajwadi Party and Congress party in 2017 UP assembly polls, the BJP President stated that the BJP had secured a massive mandate despite that alliance. He exuded confidence that the BJP would secure over 50% vote and would go on to win at least one more to 74 seats in Uttar Pradesh in 2019 Lok Sabha polls. Taking a dig at rival political parties that are feeling compelled to come together despite their known rivalries owing to the popularity of Prime Minister Narendra Modi, the BJP President said that these attempts would fail.

Reeling out statistics as to how poverty and deprivation remained unaddressed despite the Congress having ruled India for 55 years the BJP President stated how in the last 4.5 years 6 crore women have received free LPG connections, 9 crore households have received a toilet, 2.5 Crore houses have received electricity, 2.5 crore households received free housing under Awas Yojana. Describing Ayushman Bharat as the world’s largest Health Insurance programme, the BJP President said that 50 crore people of the country who could not afford Healthcare are receiving Rs 5 lakh health insurance cover for hospitalization and for other expenses as well.

Highlighting significant improvement in the overall national security scenario, Shri Shah attributed improvements to the security doctrine followed by the Modi government which gave freehand to the armed forces to retaliate every act of provocation and infiltration with a heavy response. Naxalism has also been curbed and the problem has nearly ended, he said. The BJP government had given respect to the armed forces by fulfilling a long standing demand of the armed forces for One Rank One Pension (OROP), he added.

Unlike the week-kneed response of the Manmohan Singh government in similar situations, our government carried out retaliatory surgical strikes after 16 of our sleeping soldiers were killed in a terrorist attack in Uri, he said. The whole world has started looking at us differently and with more respect after the surgical strikes, he added.

Demanding that the Congress party must make its stand clear on the National Register for Citizens (NRC), Shri Shah said that many opposition parties in Parliament shed tears for illegal immigrants who pose a threat to India’s security. Describing how this problem is eating away our resources like termites, he castigated them for vote bank politics.

Highlighting how India’s image and prestige has enhanced over the last 4.5 years under Modi government, Shri Shah recalled that Shri Narendra Modi was asked to inaugurate Davos summit though leaders from India never received such honour in the past. He also noted as major achievements the International Yoga Day, UN Champion of the Earth award for the PM Modi and India’s contribution to the deliberations in Paris Climate Summit.

Lambasting the corrupt rule of the Congress party before 2014 which looted Rs.12 lakh crore in various scandals, the BJP President listed various initiatives of Narendra Modi government like the SIT against black money, framing of rules under the benami act, fugitives act, demonetisation etc to launch a big attack against black money. By implementing direct benefit transfer (DBT) under various schemes, the BJP government has plugged leakages and insured savings to the tune of Rs.80000 crore, he added. 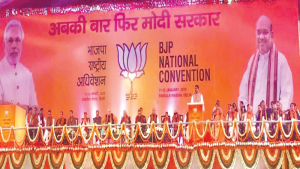 Describing the Narendra Modi government as a Spotless government, the BJP president stated that the party cadres can hold their heads high for a government of total integrity. Highlighting how the Congress Party continues to indulge in lies and calumny even after the Supreme Court found absolutely no merit in the allegations being made in Rafale procurement and no need for any investigations. Shri Amit Shah has congratulated and complimented finance minister Shri Arun Jaitley and Defence Minister Nirmala Sitharaman for exposing lies of Rahul Gandhi and Congress Party during the parliamentary debates on the issue. Stating that the Congress Party is getting desperate as the party’s image is tarnished after the revelations by “Mama Michel” and Uncle Quattrocchi. Scare of a big defeat and the immaculate image of the government have made a desperate Congress to resort to lies and Propaganda, Shri Shah revealed.

Shri Amit Shah said that the likes of Vijay Mallya, Mehul Choksi, Nirav Modi who escaped India were in partnership with the Congress Party which allowed them to loot public money and that they would never have fled India had the Congress been in power. Because “chaukidar is holding everyone by the neck, they felt compelled to flee. Modi ji’s government will ensure that they return to India and payback everything they looted from this country with the Congress party’s collusion and help.