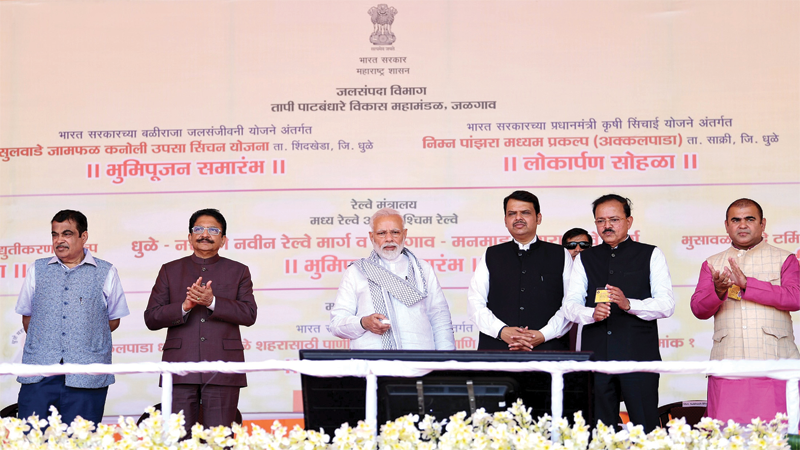 Lauding the brave hearts who sacrificed their lives in Pulwama, PM said the nation stands by them in this hour of grief and mourning. In a strong message to the perpetrators of the terror attack, he said it has been the policy of India not to interfere in other’s business. However, if someone meddles in India’s affairs, it will not go unpunished. “I salute not only to the brave sons of India but also their mothers who gave birth to such bravehearts. The perpetrators of Pulwama attack will be brought to justice and world will realise that this India is New India with a New Vision and every tear will be avenged.”.

PM inaugurated Lower Panazara medium Project under PMKSY It will irrigate about 7585 hectares area of 21 villages of Dhule and surrounding areas, acting as a lifeline to the water deficient region. He said that Prime Minister Irrigation Project has been started to improve the status of irrigation of Maharashtra and other parts of the country, including Dhule. “In last 4 years 99 irrigation projects have been fast tracked to completion. 26 of such projects belong to Maharashtra only, Panzara project is one of them. It was started 25 years back with just 21 crores but now it is completed entailing a cost of Rs 500 crores. It is the result of our efforts to bring water to the parched areas of Maharashtra”, he added.

PM dedicated Jalgaon-Udhana Doubling and electrification Rail Project to the nation. Rs 2400 crores project was fast tracked during last 4 years to ease the movement of goods and people. The rail line connecting North and South India will give a fillip to growth of surrounding regions.

Bhusaval- Bandra Khandesh Express Train was flagged off by PM through video link. The train will provide direct connectivity between Mumbai and Bhusawal. PM also flagged off Nandurbar-Udhana MEMU train and Udhana-Paladi MEMU train.
Foundation stone of 51 Km Dhule-Nardana railway Line and 107Km Jalgaon – Manmad 3rd Railway Line was laid by the PM with the press of a button. These projects will help in better time and rail traffic management.

PM said that these projects will usher in connectivity and development in the region and soon Dhule will give competition to Surat in terms of development.

PM laid the foundation stone of Water Supply Scheme and Underground Sewer Project under AMRUT for Dhule City with an estimated cost of around Rs 500 crores. The Water Supply Scheme will provide safe drinking water to address the water woes of water deprived Dhule region..

The PM said that his government is making every effort to make life easy and better for every citizen of India. He said that Ayushman Bharat has benefitted about 12 lakh people in such a short span, including 70,000 patients from Maharashtra and 1800 are from Dhule and it has been a ray of hope for the people who are poor and marginalised.