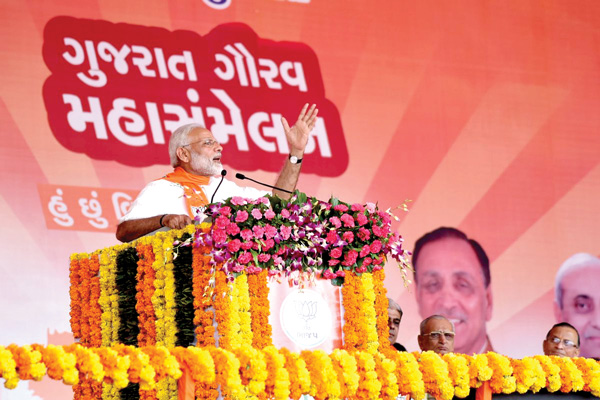 “The party also sacrificed its own leaders for dynasty politics. Former Chief Minister Madhavsinh Solanki who helped the party get a record number of seats in Gujarat, was made to resign to save one family,” PM Shri Modi said. Continuing his speech, the PM said: “I was only a chief minister of Gujarat but they used all kinds of conspiracies to try and put me behind bars…they had resolved to put Shri Amit Shah behind bars in an attempt to trap me. But see the result today, where you are and where we are.”

Prime Minister Shri Narendra Modi on 16 October, 2017 said the upcoming Gujarat elections would be a contest between the politics of development pursued by Bharatiya Janata Party and the dynastic politics of the Congress.
PM Shri Narendra Modi’s speech at Gujarat Gaurav Sammelan, a rally attended by more than 10 lakhs people on the outskirts of Ahmedabad set the tone for the party’s election campaign in Gujarat. BJP National President Shri Amit Shah was also present at the rally.

The Gujarat Gaurav Sammelan, marked the culmination of the Gaurav Yatra organized by the BJP, covering about 4,500km and 149 assembly seats in two phases of the state. 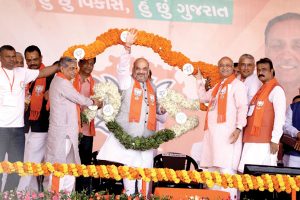 “The party also sacrificed its own leaders for dynasty politics. Former Chief Minister Madhavsinh Solanki who helped the party get a record number of seats in Gujarat, was made to resign to save one family,” PM Shri Modi said. Continuing his speech, the PM said: “I was only a chief minister of Gujarat but they used all kinds of conspiracies to try and put me behind bars…they had resolved to put Shri Amit Shah behind bars in an attempt to trap me. But see the result today, where you are and where we are.”
The PM hit out at Congress leaders for halting the development of the Narmada dam for ages and still finding the courage to question the BJP, which he said had worked towards completion of the ambitious project. “Sometimes they called us communal, sometimes we were called anti-Dalits and sometimes anti-tribals but they have failed miserably in their attempts… now when nothing works they have started criticizing us for development. Who says a village does not need roads or schools or that the urban poor do not require basic healthcare facilities? How is it possible to achieve this without development,” Shri Modi said.

PM Shri Modi said that some opposition parties were looking to observe 08 November as Black Day to protest against the invalidation of high-value banknotes on the same day last year. “This is because they are upset by the fact that their black money is gone,” he said.

The PM also accused the Opposition of creating obstacles in the BJP’s efforts for development, the way the demons disturbed the saints’ “yajna” in earlier times. “While other parties believed in dynasties, muscle or money power, the BJP derived its strength from its dedicated workers.” Without naming the Congress, Modi lambasted it for “stooping low”, losing the capacity to think positively, fomenting negativism, and being biased towards Gujarat leaders, be it Sardar Patel, his daughter Maniben, Morarji Desai or even its own senior leader Madhavsinh Solanki who had to resign in the Bofors controversy. “Even Amitbhai(Shah) was jailed just to annoy me.”

He accused the Congress with failing to complete the Narmada project just because Sardar Patel had conceived it, and charged the Opposition party of being “shameless, abusive and a liar”.

“As the PM, I have dusted out 90 incomplete dam projects worth Rs.12 lakh crore pending from the Congress era.”
Challenging the Congress on the issue of “Vikas”, Shri Modi cautioned the people not to be “misled” on this. “The Congress has invented this issue as it has no other poll plank. If the Congress was right, why did a quarter of its MLAs leave it recently?”
Switching to Gujarati, the PM assured the business community to trust the BJP and its government’s word on the issue of GST which, he said, had been approved by all political parties. “We are making efforts to sort out pending bottlenecks, if any, in periodical GST Council meetings.” He also assured them that their old records will not be scrutinised again. “Some people are trying to incite honest businessmen.”

He urged the people of North Gujarat not to forgive the Congress whose then Rajasthan Chief Minister Ashok Gehlot, had opposed the bounty of Narmada waters released to the region without permission from the neighbouring State.

Shri Modi also questioned the Congress’s reported move to observe Black Day on November 8 when demonetization was announced last year. “We are going to observe it as a Black Money Mukti Diwas”.

He said, for the BJP, elections means “Vikasvaad” while for the Congress, the polls mean “Vanshvaad” (dynasticism). “We are going to win. And they are set to lose.”

The 15-day Gaurav Yatra that started on 01 October has been the biggest mass outreach programme of the BJP, preceding elections due in December. The BJP, which won 115 seats in 2012, is targeting winning 150 seats or more. 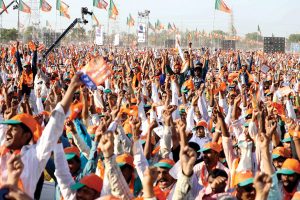 “From 1995 to 2017, BJP has written a new definition for development. Today if someone wants to know what development is, they just have to look at Modi’s development model of Gujarat,” BJP President Shri Shah said at the event.
Addressing on the occasion BJP National President Shri Amit Shah gave a call to “weed out” the Congress and questioned Congress Vice-President Rahul Gandhi’s claims on development, saying “I have recently laid the foundation stone for the District Collector’s office in Amethi which has traditionally elected the Nehru-Gandhi family”. Now you can imagine the pace of development during Congress rule.

In his speech, Shri Amit Shah enumerated the achievements of Shri Narendra Modi as Gujarat CM and said as the PM the senior leader had ensured that his home state got Rs.1.58 lakh crore as per the 14th Finance Commission, a quantum jump from the Rs. 63,000 crore provided by the preceding 13th Finance Commission. “Our governments have reduced the 16% interest levied on farm loans until 1995 to zero per cent now.”

The BJP president reminded party workers that, post-Diwali, our hard work can give us our targeted 150 seats, out of 182, in the Gujarat Assembly. “The BJP is like Angad Ka Pair in Gujarat. Nobody can unseat us!” he announced.

Gujarat Chief minister Shri Vijay Rupani, who was also present at the rally, in his address announced interest-free loans for Gujarat farmers up to Rs3 lakh.

Earlier, Shri Rupani said the State exchequer would incur a burden of over 700 crore following its decision to waive interest on farm loans. This would benefit 25 lakh farmers in the State, he said. So far, they were getting loans at an interest rate of 7 per cent. Of this, the Centre and the State bore 4 per cent and 2 per cent respectively by way of subsidy, respectively, while the farmer paid the balance 1 per cent interest, which has now been waived.