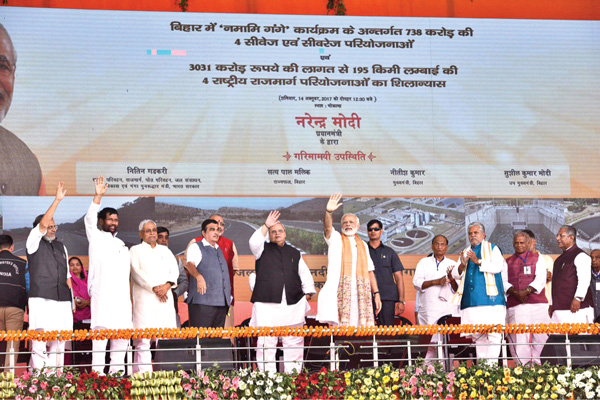 Prime Minister Shri Narendra Modi on 14 October, 2017 said his government ensures the schemes launched by it are implemented within a time limit, unlike in the past when projects were announced during election time and forgotten later.

Shri Modi deplored the thinking of many political leaders that projects like roads were not meant for the poor. “We cannot imagine the extent to which this mindset has damaged the country.”

The Prime Minister was addressing a gathering after launching development projects relating to highways and sewage treatment in Mokama, about 100 km from Bihar capital Patna.

Shri Modi began his nearly 30-minute speech in Magahi dialect and praised the people of Mokama. He recalled the city’s connection with the warrior sage Parashuram.

He also recalled the contributions of poet Ramdhari Singh Dinkar and Bihar’s first Chief Minister Shri Krishna Singh, pointing that both of them hailed from Begusarai just across the Ganges.

Underscoring his government’s commitment to boost inland water transport, the PM said during the British era, “when we had excellent waterways, Mokama was known as ‘mini Kolkata’. We must revive the lost glory”.

“My government is working tirelessly to provide better road, rail and internet connectivity and power connections and potable water to all. We have launched many schemes with these specific targets in mind,” he said.

The Prime Minister said his government launches schemes keeping a roadmap ready and ensures implementation within time limit, unlike past regimes, “which were in the habit of announcing projects during election time, only to forget about these later”.

Extending his greetings for Diwali and Chhath – Bihar’s most celebrated festival which falls six days later, Shri Modi said “once the Ganges is cleansed of pollutants, for which we have launched a special project called ‘Namami Gange’, it would be a real delight to observe the austerities of Chhath”.

The PM lauded Shri Nitin Gadkari, who holds the surface and transport ministry, for expanding India’s road network. He also had a word of praise for Bihar Chief Minister Shri Nitish Kumar for his cooperation and his concern for the initiatives taken by the Centre.

Shri Kumar urged Shri Modi to undertake key projects like a bridge parallel to the ‘Vikramshila Setu’ over the Ganges in Bhagalpur and a direct road connecting Buxar with Varanasi, which is the prime minister’s parliamentary constituency.
He also recalled his connection with Mokama, which forms a part of the Barh Lok Sabha seat, which he has represented a number of times in the parliament.

Bihar’s Deputy Chief Minister Shri Sushil Kumar Modi said this was the “first time in 27 years when the same dispensation rules both at the Centre and in Bihar.” To use an expression of the Prime Minister, Bihar now has two engines to propel it on the path towards progress, Shri Sushil Modi said.

Earlier in the day, the Prime Minister attended a function held to celebrate 100 years of establishment of Patna University followed by a brief, unscheduled visit to the newly-opened Bihar Museum.