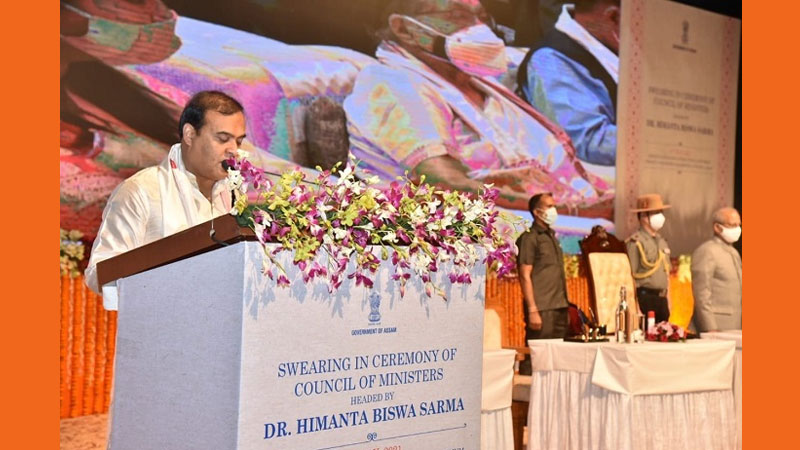 The new CM Shri Himanta Biswa Sarma, clad in traditional ‘pat silk’ dhoti and kurta with a muga ‘gamosa’ draped around his neck, took the oath of office and secrecy in Assamese. Later in a twitter message he said, “Offering my respect to all residents of the state, and following in the footsteps of Prime Minister Shri Narendra Modi, I have taken the responsibility as the Chief Minister of the holy state of Assam and promise to serve with honesty, determination and devotion.”

Showing his gratitude to the BJP National President, Shri Himanta Biswa Sarma in a message said, “My gratitude to the BJP National President Shri JP Nadda for your blissful presence when a new dawn takes place in Assam. Sir, your guidance and blessings will help us not only come up to people’s expectations but also do much more good to build a great Assam”.

“As no other name was proposed, Shri Sarma was elected unanimously as the BJP legislature party leader,” Shri Narendra Singh Tomar informed the media persons.
Speaking after the legislature party meeting, the outgoing CM Shri Sarbananda Sonowal highlighted how the BJP government had managed to restore peace and expedited development in Assam. “The government had managed to restore peace and ensure progress and security. People’s faith and trust in us increased as evident from this victory. Given his long experience, I am confident Shri Himanta Biswa Sarma will take the state to new highs,” Shri Sonowal said.

Expressing his gratitude to Prime Minister Shri Narendra Modi for reposing faith in him, Shri Himanta Biswa Sarma said, “I feel enormously blessed Hon’ble PM Shri Narendra Modi ji for your faith in me. This is the biggest day in my life, and I so fondly cherish your generous affection. I assure you, we shall leave no stone unturned to carry forward your vision of taking Assam and the North-East to greater heights”.

Later in the evening, Shri Himanta Biswa Sarma along with Shri Sarbananda Sonowal and other leaders of BJP-led alliance met Governor Shri Jagdish Mukhi and submitted a list of legislators to him, staking claim to form the government.

Noteworthy, in Assam’s history, for the very first time a non-Congress government has returned to power following the 2021 Assembly election. The BJP-led NDA won consecutive second terms and retained power in the northeastern state. The ruling NDA got total 75 seats in the 126-member house.

Congratulating Shri Himanta Biswa Sarma on taking oath as Assam CM, Prime Minister Shri Narendra Modi in a twitter message said, “Congratulations to @himantabiswa Ji and the other Ministers who took oath today. I am confident this team will add momentum to the development journey of Assam and fulfill aspirations of the people”.

Congratulating Shri Himanta Biswa Sarma BJP National President Shri Jagat Prakash Nadda in a twitter message said, “Congratulations to @himantabiswa ji on taking oath as Chief Minister of Assam. I also congratulate all those who took oath as Ministers in the Assam Government. I am confident that under the guidance of Hon’ble PM Shri @narendramodi ji, NDA Government will fulfil all the aspirations of the state”.