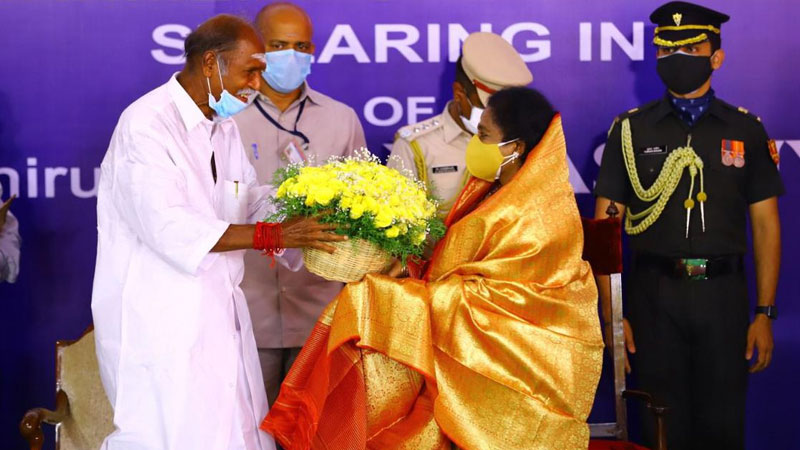 Shortly after swearing-in as the Chief Minister, Shri Rangasamy reached his chamber in the legislative assembly and signed three government orders providing rice free of cost to the beneficiaries through fair price shops, extending old age and widow pension to 10,000 fresh beneficiaries and extending educational assistance to the students sponsored by the Centralized Admission Committee to pursue professional courses.

Speaking to reporters, Minister of State for Home Affairs Shri G Kishan Reddy said the AINRC and BJP have agreed on the expansion of the Puducherry cabinet. The AINRC and BJP will have three ministerial berths each and BJP will get the deputy Chief Minister post. The cabinet will be expanded within a few days.

He said the NDA will take the UT on the path of rapid progress and fulfill the commitments made to the people as soon as possible.

After the oath-taking, Shri Rangasamy said the NDA government would strive hard for the development of Puducherry and for amelioration of the welfare of the people.

Notable, the BJP has scripted a history in Puducherry following the 2021 Assembly election results. For the first time, the BJP and AINRC alliance has swept in Puducherry by winning a conformable majority in the Assembly. As per the Election Commission of India data, the AINRC had won 10 seats while the ally Bharatiya Janata Party, which had no presence in the region until now, had secured six seats. After Karnataka, this is the second state in South India where the NDA has formed its government.