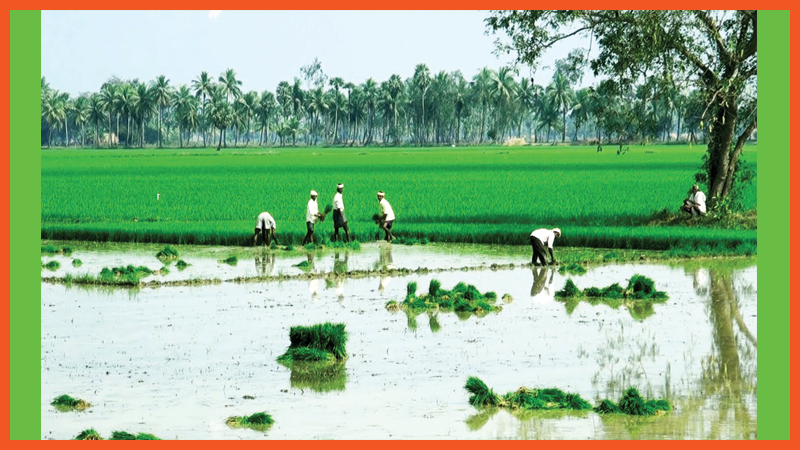 Giving a major boost for the farmers’ income, the Cabinet Committee on Economic Affairs chaired by Prime Minister Shri Narendra Modi has approved the increase in the Minimum Support Prices (MSPs) for all kharif crops for 2018-19 Season.

The decision of the CCEA is a historic one as it redeems the promise of the pre-determined principle of fixing the MSPs at a level of at least 150 percent of the cost of production announced by the Union Budget for 2018-19. The Commission for Agricultural Costs and Prices (CACP) has recommended MSPs for all kharif crops broadly in line with the announced principle.

The Budget for 2018-19 had indicated that a paradigm shift in the agricultural policies is needed to achieve the objective of doubling farmers’ income by 2022 through greater emphasis on generating higher incomes of farmers. The increase in the MSPs of Nigerseed at Rs.1827 per quintal, moong by Rs.1400 per quintal, sunflower seed by Rs.1288 per quintal and cotton by Rs. 1130 per quintal is unprecedented.

Promoting cultivation of pulses can help India overcome nutrition insecurity, improve soil fertility by nitrogen fixation and provide income support to farmers. Thus, increased MSPs for pulses will give a price signal to farmers to increase acreage. Further enhanced MSPs would boost production of oilseeds and encourage investment in its productivity and help reduce India’s import bill. Increase in MSPs of nutri-cereals will improve nutritional security and allow farmers to get higher prices.

Food Corporation of India (FCI) and other designated State Agencies would continue to provide price support to the farmers in the case of cereals including nutri-cereals. National Agricultural Cooperative Marketing Federation of India Limited (NAFED), FCI, Small Farmers Agri -Business Consortium (SFAC) and other designated Central Agencies would continue to undertake procurement of pulses and oilseeds. Cotton Corporation of India (CCI) will be the central nodal agency for undertaking price support operations for Cotton.

The BJP-led government increased the MSP for paddy by a record Rs 200 per quintal that will cost the exchequer over Rs 15,000 crore, and help fulfil its poll promise to give farmers 50 per cent more than their cost of production.

“The entire rural landscape constitutes about 70 per cent of our consumer basket and unless they have adequate purchasing power, the much-needed demand push for India Inc would not materialise,” Assocham Secretary General said in a statement.

He further said the concern over MSP increase leading to inflationary pressure may be addressed by improving the administrative machinery in the foodgrains and vegetable mandis, which are still under the clutches of cartels.

“The state governments have a key role in demolishing the mandi cartels which trigger a huge volatility in agri prices, especially those of fruits and vegetables,” the industry body said.

After announcing the highest ever single-year raise in the minimum support price of paddy, Prime Minister Shri Narendra Modi said the government has fulfilled its promise to farmers. “I am very happy that the promise made by the government to our farmer brothers and sisters of giving minimum support price at 1.5 times the production cost has been fulfilled. There has been a historic increase in the MSP. Congratulations to all farmers,” he tweeted.

Assuring that the government is committed to the development of the agriculture sector, PM Shri Modi said, “We have been taking steps in this direction and will continue to do so,” he added.

BJP National President Shri Amit Shah called this as a historic decision and said, “Modi govt has always taken decisions in favour of farmers”.
In a tweet he wrote, “I congratulate PM @narendramodi and his cabinet for approving historic rise in MSP for Kharif crops. This reflects Modi govt’s commitment towards doubling farmer’s income. This will not only assure better price for farmer’s produce but will also improve their quality of life.”

Union Home Minister Shri Rajnath Singh also lauded decision and told ANI, ” Farmers are the biggest producer and consumer but they have never got what they deserved. PM Shri Modi has realized this and gave 1.5 extra of what they produce.

Uttar Pradesh Chief Minister Yogi Adityanath said the decision would improve the quality life of farmers and that this will bring happiness.

Farmer friendly initiatives by the Government

Besides increase in Minimum Support Prices (MSP) of kharif crops, Government has also taken several farmer friendly initiatives. These are as follows:

–The premium rates to be paid by farmers are very low – 2 % of sum insured for all kharif crops, 1.5% for all rabi crops and 5 % for commercial and horticulture crops under smart technology through phones & remote sensing for quick estimation and early settlement of claims. The Government has also launched a Mobile App “Crop Insurance” which will help farmers to find out complete details about insurance cover available in their area and to calculate the insurance premium for notified crops.

–The Government has also launched a scheme to develop a pan India electronic trading platform under ‘National Agriculture Market’ (NAM) aiming to integrate 585 regulated markets with the common e-market platform in order to facilitate better price discovery and ensure remunerative prices to farmers. Each State is being encouraged to undertake three major reforms – allow electronic trading, have a single license valid throughout the State and a single entry point market fee. It will also enable farmers to discover better prices for their produce. As on 23rd March, 2018, 585 markets in 16 States and 2 Union Territories have already been brought on the e-NAM platform.

–Soil Health Cards are being issued to farmers across the country. These will be renewed every two years. The card provides information on fertility status of soil and a soil test based advisory on use of fertilizers. As on 25th June, 2018, 15.14 crore Soil Health Cards have been distributed.
Under ParamparagatKrishiVikasYojana (PKVY), the Government is promoting organic farming and development of potential market for organic products.

–The Pradhan Mantri Krishi Sinchai Yojana is being implemented with the vision of extending the coverage of irrigation ‘Har Khet ko Pani’ and improving water use efficiency ‘Per Drop More Crop ‘ in a focused manner with end to end solution on source creation, distribution, management, field application and extension activities.

–Government is focusing on improving production and productivity of crops such as rice, wheat, coarse grains and pulses under the National Food Security Mission.

–Government is encouraging formation of Farmer Producer Organisations. The Budget for 2018-19 has extended a favourable taxation treatment to Farmer Producers Organisations (FPQs) for helping farmers aggregate their needs of inputs, farm services, processing and sale operations.

–Government has set up a buffer stock of pulses and domestic procurement of pulses is also being done under Price Stabilization Fund (PSF) mainly with a view to protect consumers. The Budget for 2018-19 indicated that increasing MSP. is not adequate and it is more important that farmers should get full benefit of the announced MSP. For this, it is essential that if price of the agriculture produce market is less than MSP, then Government should purchase either at MSP or work in a manner to provide MSP for the farmers through some other mechanism. NITI Aayog, in consultation with Central and State Governments, will put in place a fool-proof mechanism so that farmers will get adequate price for their produce.
A handbook for women farmers ‘Farm Women Friendly Hand Book’ containing special provisions and package of assistance which women farmers can claim under various on­ going Missions/ Submissions/ Schemes of Department of Agriculture, Cooperation & Farmers Welfare has been brought out.

–With the above measures taken, the Government has set a target to double the farmers’ Income by 2022.