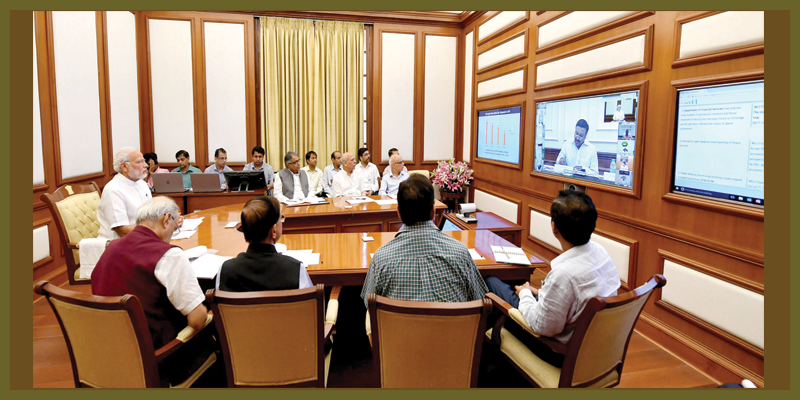 The Prime Minister, Shri Narendra Modi on June 27 interacted with the beneficiaries of various social security schemes from across the country, through video bridge. The interaction covered four major social security schemes namely Atal Bima Yojana, Pradhan MantriJeevanJyoti Yojana, Pradhan MantriSurakshaBima Yojana and VayaVandana Yojana. This is the eighth interaction in the series by the Prime Minister through video conference with various beneficiaries of Government schemes.

Expressing happiness in interacting with people who fought adversities and emerged much stronger, Prime Minister Shri Narendra Modi said that Social security schemes empower people. He added that these social security schemes of the present Government not only help people effectively deal with the uncertainties of life, but also empower them to rise over the financially difficult situations of the family.

Listening to the adversities faced by people, Prime Minister said that even though the loss of a person can never be compensated, the Government has always strived to ensure economic security to the affected family. He said that more than five crore people have benefitted from Pradhan MantriJeevanJyoti Yojana, by paying a very low premium of around Rs. 300.

During the interaction, Prime Minister summarized various initiatives of the government in taking care of the old and elderly. He said that about three lakh elderly people have benefitted from the VayaVandana Yojana started last year, under which citizens above 60 years get 8 % fixed return for 10 years. In addition, Government also increased the basic limit of income tax, from Rs. 2.5 lakh to Rs. 3 lakh for senior citizens. He emphasized that the government is committed to the wellbeing of the elderly population.

Reiterating Government’s commitment to provide social security coverage to all, Prime Minister noted that over 20 crore people have been brought under the three major social security schemes (Pradhan MantriSurakshaBima Yojana, Pradhan MantriJeevanJyoti Yojana, Atal Pension Yojana ) in the last three years.Prime Minister also ensured the beneficiaries that the government will continue its efforts of ensuring welfare of all its citizens, especially the poor and vulnerable, and empower them in the best way possible.

Interacting with the Prime Minister, beneficiaries of various social security schemes explained how these schemes helped them during the times of great need. They also thanked the Prime Minister for the various schemes he introduced andpointed out that most of the schemes have been a life changer for many.