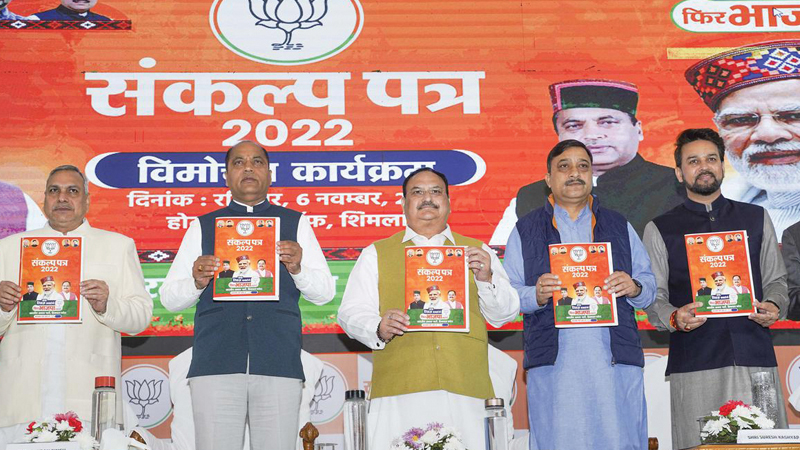 Bharatiya Janata Party National President Shri Jagat Prakash Nadda released the BJP ‘Sankalp Patra’ for Himachal Pradesh in Shimla on 06 November, 2022. Addressing on the occasion Shri Nadda said it is only Bharatiya Janata Party which is committed to the growth and development of Himachal Pradesh under the leadership and guidance of Prime Minister Shri Narendra Modi.

He said, “I have full confidence and faith that the so-called “electoral tradition” of the state will change and once again the “Lotus” will bloom in Himachal Pradesh. Historic victory of the Bharatiya Janata Party is certain in Himachal Pradesh”.

Shri Nadda said the ‘Sankalp Patra’ of the Bharatiya Janata Party is not merely an election manifesto; it is our roadmap for the development, growth and progress of Himachal Pradesh. Whereas, the manifesto of the Congress party is visionless and “wajan-less”.

Shri Nadda said we have made 11 commitments in our ‘Sankalp Patra’ and will fulfill all of them.

HIGHLIGHTS OF THE ‘SANKALP PATRA’