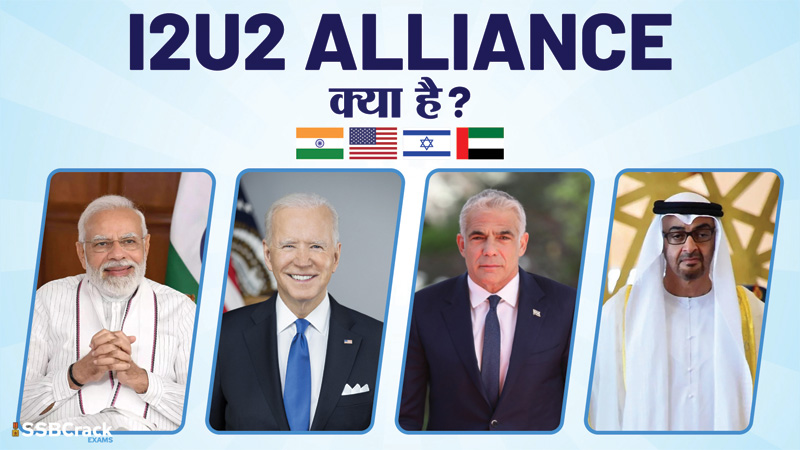 
Prime Minister Shri Narendra Modi participated virtually in the first Summit of I2U2 on July 14 along with the Prime Minister of Israel, Yair Lapid, the President of the UAE, and the President of the United States of America. The I2U2 was conceived during a meeting of the four countries’ foreign ministers in October of last year. Previously, it was a trilateral grouping that included India, Israel, and the United Arab Emirates. After the addition of the United States, it became a group of four countries. Here, I2 stands for India and Israel, and U2 stands for the USA and UAE. It aims to encourage joint investments in six mutually identified areas: water, energy, transportation, space, health, and food security. This quadrilateral alignment aims to mobilize private sector capital and deploy it in a variety of areas of economic cooperation, bringing greater prosperity and sustainable development to these countries. According to Indian Ministry of External Affairs sources, one of the most important is expertise: “Deploy expertise to modernize infrastructure, pursue pathways for low carbon development for our industries, improve public health and access to vaccines, advance physical connectivity between Middle Eastern countries, jointly create new waste treatment solutions, explore joint financing opportunities, connect our start-ups to I2U2 investments, and these initial project areas, can serve as a model for economic cooperation and offer opportunities for our business people and workers in this field.

What happened at this first summit?

The Prime Minister had a very purposeful conversation with the other I2U2 leaders at the summit on strengthening economic ties in our respective regions and beyond, which included discussions on promoting specific projects, specific joint projects, and discussions on common sectoral areas for the benefit of the respective countries and regions. I2U2’s joint statement emphasizes collaboration in two projects, the first on food security and the second on clean energy. The joint statement says the UAE—home to the International Renewable Energy Agency (IRENA)—will invest $2 billion USD to develop a series of integrated food parks across India that will incorporate state-of-the-art climate-smart technologies to reduce food waste and spoilage, conserve fresh water, and employ renewable energy sources. India will provide appropriate land for the project and will facilitate farmers’ integration into the food parks. The U.S. and Israeli private sectors will be invited to lend their expertise and offer innovative solutions that contribute to the overall sustainability of the project. These investments will help increase crop yields, thereby reducing food insecurity in South Asia and the Middle East.

In terms of clean energy, the I2U2 Group will advance a hybrid renewable energy project in India’s Gujarat State that will include 300 MW of wind and solar capacity complemented by a battery energy storage system. A feasibility study for the $330 million USD project was funded by the US Trade and Development Agency. Companies based in the UAE are looking for ways to serve as critical knowledge and investment partners. Israel and the US plan to collaborate with the UAE and India to highlight private sector opportunities. Indian companies are eager to participate in this project and help India reach its goal of 500 GW of non-fossil fuel capacity by 2030. Such initiatives have the potential to turn India into a global hub for alternative supply chains in the renewable energy sector.

Aside from the two projects mentioned above, what other issues have been brought to light?

Aside from these two specific projects, the I2U2 leaders discussed how to modernise infrastructure, including connectivity, how to pursue low-carbon development pathways, areas of public health, waste treatment solutions, and connecting start-ups to the I2U2 investment platform and the FinTech sector. Prime Minister Shri Modi emphasised the importance and feasibility of expanding the UPI payment system across the I2U2 areas in the FinTech sector.

What is the AIM for Climate, in which India has expressed interest?

The Summit In A Nutshell

In a nutshell, the summit deliberation was very productive, and it saw the emergence of a new evolving mechanism in cooperation among I2U2 partners and other stakeholders in the regions.