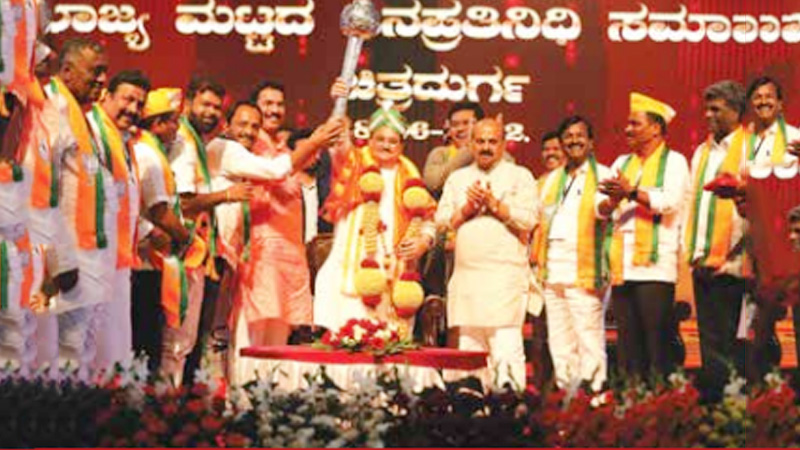 BJP National President Shri JP Nadda on a day’s Pravas visited Karnataka and addressed the Gram Panchayat Presidents and Vice Presidents Samavesh in Chitradurga and the National OBC Morcha Prashikshan Varg in Bengaluru on 18 June, 2022. Addressing the karyakartas in Chitradurga he said, “Our identity should be BJP”. The BJP National President asked the Gram Panchayat leaders of Karnataka to dedicate themselves for the development and growth of the state and for creation of a ‘New India’ under the dynamic leadership of Prime Minister Shri Narendra Modi.

Shri Nadda said this is the golden period of development for our Panchayats. Today, under the leadership and guidance of the Prime Minister, Panchayats are getting maximum financial aid. Now, it is the responsibility of our Panchayat leaders to ensure that money should be properly utilized and the poor should get maximum benefits out of it. Key points of the Speech:

It is a revolutionary scheme which will give more strength to our armed forces. It will not only help our youth to serve the army but also give them better job and growth opportunities in their lives.

There are some negative and disruptive forces in our country which do not want reforms in our armed forces and that is why they are misleading our youth. But we want our youth to serve the nation and have the best in their lives. The Bharatiya Janata Party is always committed for the welfare and empowerment of our youth.
I appeal to the youth that they should shun the path of agitation and violence. They should first study and understand the scheme and see how good and beneficial it is for them and their growth. The scheme is giving them so many opportunities. Our youth should trust and have faith in our Prime Minister. Whatever he is doing is for the better future of our youth and our country.

RURAL LANDSCAPE OF THE COUNTRY WILL CHANGE

Earlier the money sent from the Centre and meant for Panchayats were used somewhere else by the Congress governments. But today there is no diversion of Panchayat funds. Money sent from Delhi to Karnataka is utilized 100 percent for the growth and development of our Panchayats. Earlier the average per person expenditure on development of Panchayats was Rs.54 which under the Modi Government has gone up to Rs.674 which clearly shows the commitment of Prime Minister Shri Narendra Modi.

Today, Karnataka is free from open defecation. Total 3,585 villages have been connected with solid waste management. Karnataka is the first state to have its rural sanitation policy.

The Bharatiya Janata Party believes that every person particularly those living in rural areas should get Social Security. The Narendra Modi Government is working in this direction and important schemes like Atal Pension Yojna, Pradhan Mantri Jeevan Jyoti Yojna, Pradhan Mantri Jeevan Suraksha Yojana and Ayushman Bharat Yojna are its testimony. It is the responsibility of our Panchayat leaders that all people living in villages and rural areas should get enrolled in these schemes so that they could get its benefits.

KARNATAKA IS NO. 1 IN FDI

–Today, Karnataka is No. 1 in FDI. Karnataka is exporting highest IT software products, spices worth $4 billion, coffee worth $1billion and many other products. All these are records which showcase the growth and development story of Karnataka under the Bharatiya Janata Party government.

–Prime Minister Shri Narendra Modi in his eight years has done so much work which was unimaginable under the previous regimes. He has given a clear message to the world that no one can play with the security and safety of our country. He has brought revolution in each and every sector of governance.