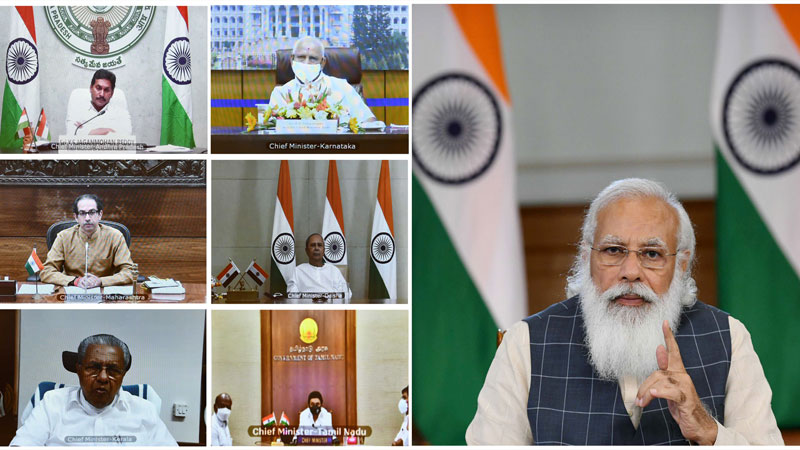 The Prime Minister, Shri Narendra Modi on July 16 interacted with CMs of Tamil Nadu, Andhra Pradesh, Karnataka, Odisha, Maharashtra and Kerala to discuss Covid related situation. Union Home Minister, Health Minister were also present in the meeting.The Chief Ministers thanked the Prime Minister for lending all possible help and support in tackling Covid. They briefed the Prime Minister about the progress of vaccination and steps that are being taken to contain the spread of the virus in their states. They also provided feedback about the vaccination strategy.

The Chief Ministers talked about the steps taken to boost medical infrastructure and gave suggestions on dealing with any possible rise of cases in future. They also discussed post-Covid issues being faced by patients and steps being taken to provide assistance in such cases. They gave assurance that they are doing their best to control the surge of infection.

Union Home Minister mentioned that these six states account for more than eighty percent of the total cases during the month of July , while some of these states have very high test positivity rate as well. Union Health Secretary discussed the Covid cases in the country, and talked about the need to reinforce Covid appropriate behaviour and containment measures in the districts with high case load. He also suggested that opening up of these districts should be done in a graded and calibrated manner.

In his closing remarks the Prime Minister lauded the state governments for their mutual cooperation and learning in their fight against the pandemic. The Prime Minister said that all of us are at a point where apprehensions of the third wave are continuously expressed. Despite experts giving positive signals due to the downward trends increasing number of cases in few states is still worrisome. The Prime Minister pointed out that during the last week 80 per cent cases as well as 84 per cent unfortunate deaths came from the states present in the meeting. Initially experts believed that states where the second wave originated will see the normalization first. However, increasing numbers in Kerala and Maharashtra are cause of grave worry, said the Prime Minister.

The Prime Minister cautioned that similar trends were seen in January-February before the second wave. That’s why, the Prime Minister insisted, that in the states where cases are rising, we have to take proactive measures to prevent the possibility of the third wave.

The Prime Minister underlined the expert’s view that if the cases keep on rising for long time, chances of mutation of the Corona virus will also increase and dangers of new variants will also rise. Therefore, said the Prime Minister, we need to continue with the strategy of Test, Track, Treat and Teeka (vaccination) while putting special focus on Micro-containment zones. Districts with large numbers should be focussed on. Shri Modi stressed increased testing in entire states. Terming vaccine as a strategic tool for high infection areas, the Prime Minister stressed the effective use of vaccination. The Prime Minister praised the states who are using this time to improve their RT-PCR testing capacity.

The Prime Minister exhorted the states to fill the infrastructural gaps, specially in the rural areas. He also asked to strengthen IT systems, control rooms and call centres so that citizens get access to resources and data in a transparent manner and patients are spared the hassle. Shri Modi said that out of 332 PSA plants allocated to the states present in the meeting, 53 plants have been commissioned. He asked the Chief Ministers toexpedite the completion of the plants. The Prime Minister made special mention of the need to protect children from being infected and make all possible arrangement in this regard.

The Prime Minister noted with concern the rise of number of cases in Europe, America and Bangladesh, Indonesia, Thailand and many other countries. This should alert us and the world, said the Prime Minister.

The Prime Minister reiterated that Corona is not over and expressed deep concern over the pictures that are coming post lockdown. He emphasized need to follow protocol and avoid crowding as many states in the meeting have metropolitan cities with dense population. He also called upon political parties, social organizations, and NGOs to spread awareness among people.


The new phase of universalization of COVID-19 vaccination commenced from 21st June 2021. The vaccination drive has been ramped up through availability of more vaccines, advance visibility of vaccine availability to States and UTs for enabling better planning by them, and streamlining the vaccine supply chain.
As part of the nationwide vaccination drive, Government of India has been supporting the States and UTs by providing them COVID Vaccines free of cost. In the new phase of the universalization of the COVID19 vaccination drive, the Union Government will procure and supply (free of cost) 75% of the vaccines being produced by the vaccine manufacturers in the country to States and UTs.
More than 42.15 crore (42,15,43,730) vaccine doses have been provided to States/UTs so far, through all sources and a further 71,40,000 doses are in the pipeline. Of this, the total consumption is 40,03,50,489 doses as per data available till 20 July 2021.