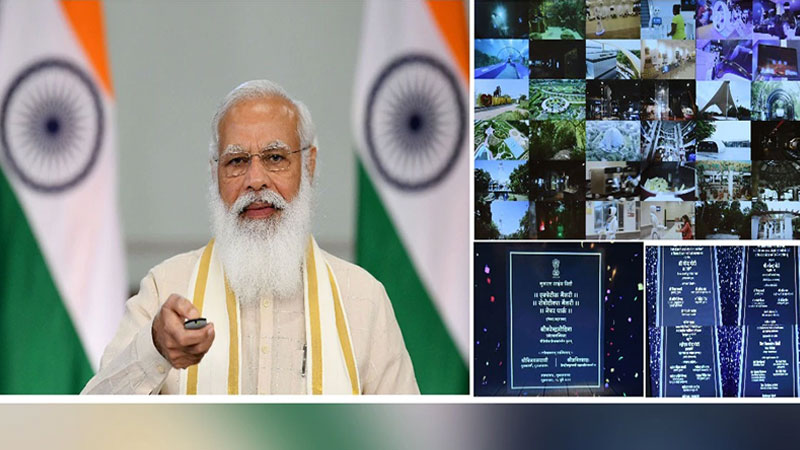 Prime Minister Shri Narendra Modi on July 16 inaugurated and dedicated to the nation several key projects of the Railways in Gujarat through video conference. He also inaugurated the Aquatics and Robotics Gallery, and Nature Park in Gujarat Science City during the event. He also flagged off two new trains i.e Gandhinagar Capital – Varanasi Superfast Express and MEMU service trains between Gandhinagar Capital and Varetha.

Addressing the gathering, the Prime Minister said the goal of the country today is not only to create a concrete structure but to create an infrastructure which has its own character. He said that children’s learning and creativity should also get space along with their entertainment for their natural development. He added that Science City is a project that combines re-creation and re-creativity. It has such re-creational activities that encourage creativity in children.

The Prime Minister noted that the Aquatics Gallery built in Science City is going to be even more enjoyable. It is one of the top aquariums not only in the country but also in Asia. He said that the sight of marine biodiversity from around the world at one place is a wonderful experience in itself.

The Prime Minister said the interaction with robots in the Robotics Gallery is not only the center of attraction but will also inspire our youth to work in the field of Robotics and will inculcate curiosity in their mind.

The Prime Minister stressed that India’s needs of the 21st century cannot be met by the modus operandi of the 20th century. Therefore, there was a need for a fresh reform in the railways. He said that today the results of efforts to develop railways not just as a service but as an asset are visible. He said today major railway stations across the country are being modernised. Even railway stations in Tier 2 and Tier 3 cities are now equipped with Wi-Fi facilities. The unmanned railway crossings on broad gauge have been completely eliminated to enhance safety of the people.
The Prime Minister emphasized on the critical role played by railways in a vast country like India. He said that railways also bring new dimensions of development, new dimensions of facilities. Due to the effort of the last few years, today trains are reaching the capitals of the North East for the first time. “Today Vadnagar has also become a part of this expansion. I have so many memories attached to Vadnagar station. The new station looks really attractive. With the construction of this new broad gauge line, the Vadnagar-Modhera-Patan heritage circuit is now connected with better rail service”, said the Prime Minister.

The Prime Minister remarked that the vehicle of development of New India will move forward only by moving on two tracks simultaneously. One track is of modernity, the other track is for the welfare of the poor, farmers and middle class.