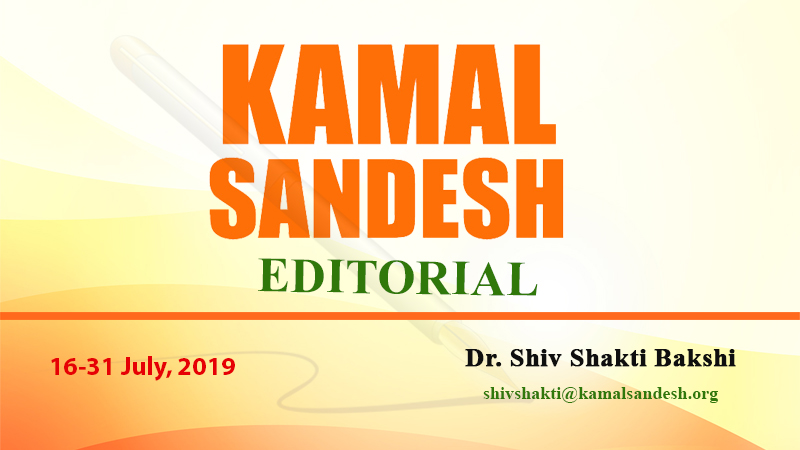 The first budget of the second Modi government can be rightly said to be representing Aasha, Vishwas and Aakansha of the entire nation. As the Prime Minister had said that the mantra of ‘Sabka Saath, Sabka Vikas’ should be reinforced with the commitment to win ‘Sabka Vishwaas’, budget shows an inclusive and futuristic approach in taking India to newer heights. The hope and trust of the nation reposed on Prime Minister Shri Narendra Modi through a massive mandate is also fuelled by an aspirational India which want to see new dreams and work tirelessly to realise them. As Prime Minister had said that he dedicated his last five years in addressing the basic needs of the people, the next five years will cater to the aspirations of the nation, the budget takes that commitment forward in meeting the expectations of every section of the people in all walks of life. The Finance Minister Smt. Nirmala Sitharaman should be congratulated for presenting a ‘citizen, development friendly, future oriented and a budget for new India’ in the words of the Prime Minister Shri Narendra Modi. The budget has come out as a comprehensive, inclusive and visionary document for achieving the target of making India a 5 trillion economy in the coming years.

The budget departs from being a conventional document submerged in a plethora of data to the one expounding a new path of development while meeting emerging challenges on almost all fronts. While it has reinforced government’s focus on MSMEs, Start-Ups and Make in India in all crucial sectors, it has further strengthened its resolve on health and wellness of the people particularly focussing the women and children in pursuance of its goal to achieve a healthy society. It has also aimed to make our farmers exporters by focussing on self sufficiency and export of food grains, pulses, oilseeds, fruits and vegetables. The other most striking feature of the budget is its commitment towards a pollution free India by achieving green Mother Earth and blue skies. The cleaning of rivers and water management are also supposed to take India towards a new future wherein scarcity of clean water can be addressed through integrated approach. Apart from its continued focus on quality infrastructure, the emphasis on Digital economy and launching of Gaganyan, Chandrayan and other satellites shows commitment towards building an India of future which can lead the world in the field of science and technology. In addition to all these innovative measures, the emphasis on people’s participation in line with the mantra of ‘Minimum Government, Maximum Governance’ has made this budget adhere to the democratic principle of governance.

While charting a course for the future, the budget seeks to build on the gains from the last five budgets of the first tenure of the Modi government. It has further strengthened the approach towards, simplification of tax structure, modernization of infrastructure, enhancing people’s participation, making the system more transparent and accountable and keeping focus on the poor, exploited and deprived sections of the society. BJP National President Shri Amit Shah has rightly said, “In the last five years, our government took various steps to empower farmers, poor people, Dalits and others. In the next five years, this empowerment will now make them the country’s powerhouse. The country will get the energy of becoming the 5 trillion economy through this powerhouse.” As India is scaling new heights under the dynamic and visionary leadership of Prime Minister Shri Narendra Modi, the emphasis on the mantra of ‘Antyodaya’ has made the BJP realise its dream of emancipating the poorest of the poor by empowering them through various means. The successive budgets of the Modi government has made this happen as per the commitment of Prime Minsiter Shri Narendra Modi to the poor, deprived and exploited sections of the society. As people in India look forward for a New India, the budget meets the expectations of the nation in making India a 5 trillion economy.