Prime Minister Shri Narendra Modi was in Indonesia from 14 to 16 November 2022, to participate in the 17th G20 Leaders’ Summit which was held in Bali and chaired by Indonesia. Apart from attending G20 Summit, he also held a series of engagements.
The Prime Minister had several bilateral meetings with Germany, Indonesia, Italy, Australia, and the UK. Prime Minister’s first engagement in Bali was the official welcome by His, the President of Indonesia. At the meet, India also worked with Indonesia to give a larger voice to the Global South in the G-20.

Session on food and energy security


In the G-20, Prime Minister’s first intervention was during the session on food and energy security. In the intervention, PM has emphasized the impact of contemporary developments on the developing world. He particularly underlined the criticality of resilient supply chains for food, fertilizer and energy and the need for affordable finance for a smooth energy transition for the Global South. Prime Minister Modi also highlighted India’s effort to further food security for our citizens as also for the needs of other developing countries, and in this context, shared India’s achievements and experiences, including the practices of natural farming, and called upon the G-20 Members to celebrate the International Year of millets 2023.

Prime Minister Shri Narendra Modi later attended the second session on health. PM Shri Modi met the US President Mr. Biden and the Indonesian President on the margins of the G-20 Summit on 15 November. Prime Minister Shri Modi has found that G-20 is the premier forum for international economic cooperation and underlined the importance of the G-20 continuing to demonstrate its capacity to bring together major economies to overcome global challenges.

In his brief bilateral introduction with President Biden, Prime Minister reviewed the continuing deepening of the India-US strategic partnership and expressed satisfaction about the ongoing strong cooperation between the two countries in groupings such as the Quad, ITU2 etc. Prime Minister Shri Modi and President Biden agreed to maintain close cooperation during India’s G-20 Presidency. Prime Minister also had several meetings with leaders of the G-20 Members, guest countries and international organizations on that day.

Prime Minister also addressed and interacted with the Indian community and Friends of India in Bali. He highlighted the close cultural and civilization linkages between India and Indonesia and the role of the diaspora in deepening these vibrant and ancient ties. Prime Minister made his intervention during the session on Digital Transformation. This is an area where India is a global leader and Prime Minister used this opportunity to highlight actions taken by India and offered to share our expertise in the space. Prime Minister Modi highlighted the importance of technology and an open, inclusive and empowering public digital infrastructure in fostering global economic transformation, building inclusive societies, empowering billions of people and improving livelihoods. Digital transformation will also feature among the key priorities during India’s G-20 presidency that commences on the first of December.

Prime Minister joined the other G-20 leaders on a visit to the mangrove forests. India also has, large mangrove reserves, and these serve as a refuge for biodiversity, as well as substantial carbon sinks. We recently joined the mangrove Alliance for Climate led by the UAE and Indonesia. This initiative brings the world together to advance the global costs of mangroves.

Apart from the bilateral meeting with Indonesia, Prime Minister also had a working lunch with President Macron of France. Defence, civil nuclear cooperation, trade and economy and new areas of economic partnership constituted key topics of the conversation during this working lunch meeting. 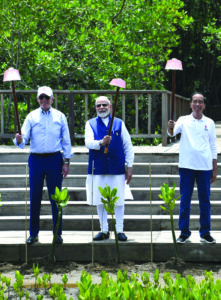 Prime Minister Shri Narendra Modi also met Rishi Sunak, Prime Minister of the United Kingdom on the sidelines of the G-20 Summit in Bali. This was the first meeting between the two leaders. Prime Minister congratulated Prime Minister Sunak on assuming office. The two leaders expressed satisfaction at the state of the wide-ranging India-UK Comprehensive Strategic Partnership and progress on the Roadmap 2030 for Future Relations. The two leaders appreciated the importance of working together in bilateral and multilateral forums including G20 and the Commonwealth. Discussions touched upon important sectors of collaboration such as trade, mobility, defence and security.

Prime Minister also had his first meeting with the Italian Prime Minister Giorgia Meloni and both leaders reviewed their multi-sectoral partnerships.

Outcome document of the G-20 Summit

The outcome document of the G-20 Summit has been adopted by consensus. India worked constructively and cooperated with Indonesia and others towards this goal. Some of the key outcomes in the outcome document reflect the priorities and vision of the Prime Minister. India’s priorities such as the views of the Global South, sustainable lifestyles, climate financing, nutritious food, multilateral reforms, global digital health, networks, digital networks, etc. were found mentioned in the document. The consensus document going forward will be a positive development as India takes over the presidency of the G-20 on the first of December.