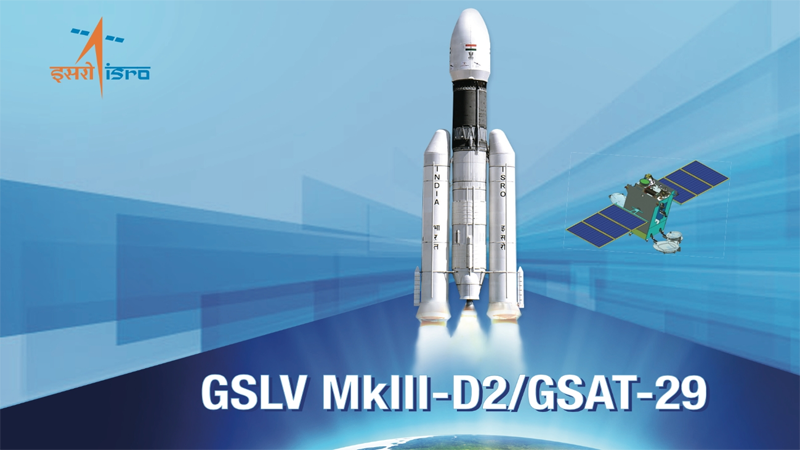 GSLV MkIII-D2 lifted off from the Second Launch Pad of SDSC SHAR at 17:08 hours (IST), carrying the 3423-kg GSAT-29 satellite. About 17 minutes later, the vehicle injected the satellite into the Geosynchronous Transfer Orbit (GTO) as planned.
After injection, ISRO’s Master Control Facility at Hassan has assumed the control of the satellite. In the coming days, three orbit raising manoeuvers will be executed to position the satellite in the Geostationary Orbit at its designated location.

GSLV Mk III is a three-stage heavy lift launch vehicle developed by the Indian Space Research Organisation (ISRO).
GSAT-29 is a multiband, multi-beam communication satellite, intended to serve as test bed for several new and critical technologies. Its Ku-band and Ka-band payloads are configured to cater to the communication requirements of users including those from remote areas especially from Jammu & Kashmir and North-Eastern regions of India.

t   @narendramodi
“My heartiest congratulations to our scientists on the successful launch of GSLV MK III-D2 carrying GSAT-29 satellite. The double success sets a new record of putting the heaviest satellite in orbit by an Indian launch vehicle. The satellite will provide communication and internet services to the remotest corners of our country”.

t   @AmitShah
The successful launch of #GSAT29 satellite through GSLV MK III-D2 is a matter of great pride for every Indian. This will further strengthen communication services in remote areas of the country. I congratulate team @isro for this remarkable achievement.