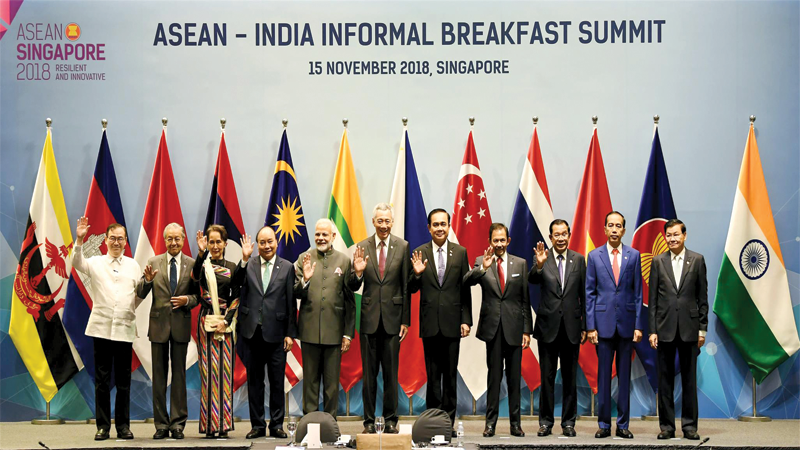 The East Asia Summit is a premier forum in the Asia-Pacific region. Since its inception in 2005, it has played a significant role in the strategic, geopolitical and economic evolution of East Asia. Apart from the 10 ASEAN member-states, East Asia Summit includes India, China, Japan, Republic of Korea, Australia, New Zealand, United States and Russia.

On 14th November, Prime Minister Shri Modi participated in the 2nd RCEP Summit. In his intervention, Prime Minister underlined that the early conclusion of the RCEP could spur economic growth and support job creation. He expressed satisfaction at the substantial progress made in the negotiations thus far and added that he is personally determined to explore every opportunity to arrive at a balanced, satisfactory and mutually beneficial agreement.

On the same day, Shri Modi attended the Fintech Festival and India-Singapore Hackathon event. Prime Minister was the first Head of Government to deliver the keynote address at the Singapore Fintech Festival. In his address, Prime Minister highlighted the impact of financial inclusion and digitization in India and its effect on economic access and empowerment, governance, delivery of public services, innovation and startups.

Prime Minister Shri Modi launched a global platform by the name ‘APIX’, the first of its kind, to connect fintech companies and financial institutions from India and ASEAN countries. He also attended the India-Singapore Hackathon event jointly organized by All India Council for Technical Education (AICTE) and Nanyang Technological University of Singapore (NTU).

During the ASEAN-India Breakfast Summit, which was attended by leaders of all ASEAN Countries, Shri Modi emphasized on the salience of ASEAN’s unity and centrality in India’s “Act-East Policy”. He commended the consensus-driven approach of ASEAN and advocated for an open and inclusive Regional Security Architecture based on ASEAN Centrality.

PM expressed support for deepening trade and investment relations with ASEAN and emphasized the importance of improving regional connectivity with ASEAN, including land, sea and digital connectivity. The ASEAN leaders expressed interest in furthering maritime cooperation with India, especially in the field of Blue Economy. During the meeting, the ASEAN leaders joined Prime Minister in expressing their satisfaction on the progress made on activities since the ASEAN-India Commemorative Summit held in New Delhi in January, 2018.

Referring to his Shangri-la dialogue address earlier this year at Singapore, Prime Minister Shri Narendra Modi observed that the principles outlined by him on the Indo-Pacific has found wider resonance and acceptance within the region.
On the margins of the Summit, Shri Modi held bilateral discussions with leaders of the United States, Singapore, Australia and Thailand.

The two leaders had an extensive exchange of views on entire gamut of bilateral relations and including exchange of views on regional issues. In the bilateral relationship they looked at and spoke of Australia’s foreign policy white paper as well as the paper which the Australian Department of Trade has got which is India’s Economic Strategy. Prime Minister Modi invited Australia to look into investing in National Infrastructure Investment Fund. Also the second item which we looked at was; the possibility that was looked at was; the technologies that Australia has for mining, and if there could be a cooperation on that. There was a discussion on defense and security cooperation and both expressed satisfaction that there were a number of areas in which we could be working together including our cooperation which is ongoing in the various joint exercises. The third bilateral which our Prime Minister had was with the Prime Minister of Thailand. Thailand is going to of course become the next chair of ASEAN and it will not only be the chair of ASEAN but it will also be the country coordinator for India, so that assumes significance for the relationship. The two Prime Minister’s reviewed the relationship. There was emphasis on projects of connectivity, there was emphasis on projects of economic collaboration and there was the commitment by both leaders that we would be working together in building the India-ASEAN relations in the coming period.

The fourth bilateral which Prime Minister had was with Vice President Mike Pence of US.

In the meeting Vice President Pence specifically acknowledged that India has made substantial progress economically as well as diplomatically in regional and international affairs. He appreciated the strong leadership that Prime Minister Modi has shown, he felt that India is a positive factor in regional and international relations and he said that United States looks forward greatly to working with India on various issues both on political side and economic side to ensure that we have a fair rules based international order and Prime Minister reciprocated that sentiment. Both leaders held talk on energy trade,counter-terrorism and issue of H1B visa. Vice President Pence accpted PM Modi’s invitation to visit india in 2019.

The Prime Minister also attended the 13th East Asia Summit, which is a premier Leaders’-led forum in the Indo-Pacific Region. In his intervention at the Plenary, he underlined the centrality of trade and investment in enhancing prosperity and security of the Indo-Pacific. In this context, Prime Minister Shri Narendra Modi emphasized that India remains committed to the early conclusion of a balanced and comprehensive RCEP.


He joined EAS leaders in the adoption of five EAS Statements on topical issues viz. Foreign Terrorist Fighters and Returnees; Marine Plastic Debris; Smart Cities; Safe and Secure use of Nuclear and Radioactive Materials; ICT and Digital Economy. In particular Prime Minister commended EAS for adoption of EAS Statement on Foreign Terrorist Fighters and Returnees and hoped that the cooperation between the member states will move beyond statements and towards more practical cooperation.