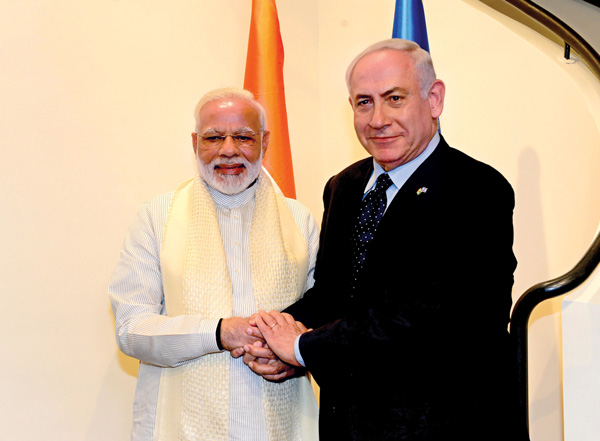 Prime Minister Shri Narendra Modi was on a historic Israel visit from 4 to 6 July at the invitation of Prime Minister Benjamin Netanyahu of Israel. It was first-ever visit by any Indian Prime Minister to the country. During the visit both countries agreed to expand cooperation from defense to science, agriculture, cleanness of Ganga river and technology.

rime Minister Shri Narendra Modi’s recently concluding Israel visit culminated in important agreements with Israel in the field of Agriculture, space, water conservation, defence technology and cleanness of the Ganga river. As a part of PM’s historic visit from 4-6 July 2017 both countries agreed to create a bilateral technology innovation fund worth $40 million. The visit also marked the 25th anniversary of the establishment of diplomatic relations between the two countries. This historic first-ever visit by an Indian Prime Minister to Israel solidified the enduring friendship between their peoples and raised the bilateral relationship to that of a strategic partnership.

Reviewing the development of the relationship after a quarter century of diplomatic ties, the two leaders agreed on initiatives and policies that would reflect the goals and aspirations of both nations and widen their collaborative endeavours in a broad range of areas. They visualized that the two countries will become close partners in development, technology, innovation, entrepreneurship, defence and security.

Recognizing its centrality for development, India and Israel agreed to establish a “Strategic Partnership in Water and Agriculture”. This will focus on water conservation, waste-water treatment and its reuse for agriculture, desalination, water utility reforms, and the cleaning of the Ganges and other rivers using advanced water technologies. It will also include the reinforcement and expansion of the existing Centres of Excellence (COE) under the stewardship of the Israeli Ministry of Foreign Affairs (MASHAV) and the Ministry of Agriculture of India to promote commercially viable business models involving Farmer Producer Organizations (FPOs); the provision of quality planting material; and the transfer of post-harvest technical know-how and market linkages involving the private sector through PPP, B2B & other models. The two leaders also agreed on the establishment of a Joint Working Group to steer this Partnership.

Recognizing the importance of facilitating movement of businessmen and women, India and Israel underlined their expectation that the granting of multiple entry visas to business people for up to five years will encourage greater economic and commercial exchanges.

The two Prime Ministers agreed that negotiations would be conducted on an agreement for the Protection of Investments in order to encourage bilateral investments from both sides.

The two Prime Ministers welcomed the conclusion of the Memorandum of Understanding for establishing the India-Israel Industrial R&D and Innovation Fund (I4F) by the Department of Science and Technology, India and the National Authority for Technological Innovation, Israel with a contribution of US$ 20 million from each side.

Recognizing the importance of fostering wide ranging knowledge-business partnership for industries, R&D institutions and government agencies from both countries, Israel warmly welcomed India’s offer to be the “Partner Country” for the annual Technology Summit to be held in India in 2018.

Both leaders welcomed the ongoing cooperation between the Israel Space Agency (ISA) and the Indian Space Research Organisation (ISRO). India and Israel are committed to promote security and stability in cyberspace on both the governmental and private levels.

Recognizing that terrorism poses a grave threat to global peace and stability, the two Prime Ministers reiterated their strong commitment to combat it in all its forms and manifestations. They stressed that there can be no justification for acts of terror on any grounds whatsoever.

The two Prime Ministers underlined the importance of enhanced collaboration in the field of Higher Education and Research and agreed to promote this through relevant agreements and the Joint Research Grant Programme.

Noting the importance of growing people to people contacts between India and Israel, the two leaders agreed to facilitate the promotion of travel & tourism in both directions, including through the further enhancement of air links between India and Israel. Appreciating the contribution of the Jewish community in India and Jews of Indian origin in Israel in bringing the two societies closer, Prime Minister Modi announced the opening of an Indian Cultural Centre in Israel. This was warmly welcomed by Prime Minister Netanyahu who expressed his deep respect for Indian culture and recalled Israel’s strong support and sponsorship of PM Modi’s initiative to promote the practice of Yoga by designating June 21 as International Yoga Day.

The two Prime Ministers discussed the developments pertaining to the Israeli-Palestinian Peace Process. They underlined the need for the establishment of a just and durable peace in the region.