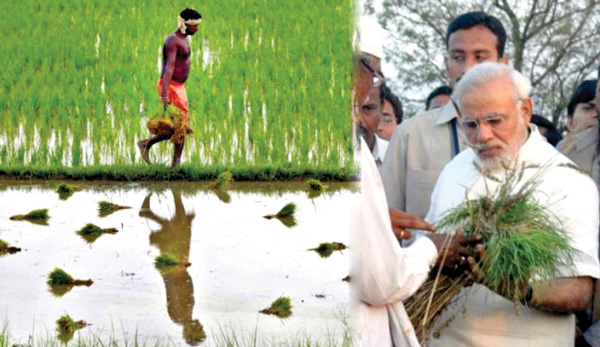 In the last three years of its tenure Modi Government has emerged as pro-farmer, pro-village, pro-poor government. The government has taken several measures to enhance the income of farmers. Some important measures are as follow:
Soil Health Card (SHC) scheme by which the farmers can know the major and minor nutrients available in their soils which will ensure judicious use of fertiliser application and reduce cost of inputs and improve soil fertility.

Neem Coated Urea is being promoted to regulate use of urea, enhance its availability to the crop and reduce cost of fertilizer application. The entire quantity of domestically manufactured and imported urea is now neem coated.

Paramparagat Krishi Vikas Yojana (PKVY) is being implemented with a view to promote organic farming in the country. This will improve soil health and organic matter content and increase net income of the farmer so as to realise premium prices.
The Pradhan Mantri Krishi Sinchai Yojana (PMKSY) is being implemented to expand cultivated area with assured irrigation, reduce wastage of water and improve water use efficiency.

The National Agriculture Market scheme (e-NAM) was launched on 14 April 2016. The Scheme envisages initiation of e-marketing platform at national level and will support creation of infrastructure to enable e-marketing in 585 regulated markets across the country by March 2018. So far, 455 markets of 13 States have been integrated with e-NAM. This innovative market process evisages better price discovery, transparency and competition to enable farmers to get improved remuneration for their produce and move towards ‘One Nation One Market’.

Pradhan Mantri Fasal Bima Yojana (PMFBY) is being implemented from Kharif 2016 season and is available to the farmers at low rates of premium. This scheme would provide insurance cover for all stages of the crop cycle including post-harvest risks in specified instances.

The Government provides interest subvention of 3% on short-term crop loans up to Rs.3.00 lakh. Presently, loan is available to farmers at an interest rate of 7% per annum, which gets reduced to 4% on prompt repayment. Further, under Interest Subvention Scheme 2016-17, in order to provide relief to the farmers on occurrence of natural calamities, the interest subvention of 2% shall continue to be available to banks for the first year on the restructured amount.

Rashtriya Krishi Vikas Yojana (RKVY) enables Governments to further implement the scheme in the State as per its requirement. The States have been provided flexibility and autonomy for selection, planning approval and execution of projects/programs under the scheme as per their need, priorities and agro-climate requirements.

Under National Food Security Mission (NFSM), a Centrally Sponsored scheme, NFSM-Pulses is being implemented in 638 districts of 29 States, NFSM-Rice in 194 districts of 25 States, NFSM-Wheat in 126 district of 11 States and NFSM-Coarse Cereals is being implemented in 265 districts of 28 States of the country for increasing the production and productivity of Rice, wheat, pulses and coarse cereal crops. Under NFSM, assistance is provided to farmers for distribution of Seeds (HYVs/Hybrids), production of seeds (only in pulses), INM and IPM techniques, resource conservation technologies/tools/farm mechanization, efficient water application tools, cropping system based trainings to farmers and also assistance for value addition.

National Mission on Oilseeds and Oil Palm (NMOOP) programme, is being implemented since 2014-15. The objective of NMOOP is to increase production and productivity of oilseeds for meeting the domestic requirement of vegetable oil.
Mission for Integrated Development of Horticulture (MIDH), a Centrally Sponsored Scheme, is being implemented w.e.f. 2014-15, for holistic growth of the horticulture sector covering fruits vegetable, root and tuber crops, mushrooms, spices, flowers, aromatic plants, coconut, cashew, cocoa and bamboo. The Mission subsumes National Horticulture Mission (NHM), Horticulture Mission for North East & Himalayan States (HMNEH), National Horticulture Board (NHB), Coconut Development Board (CDB) and Central Institute for Horticulture (CIH), Nagaland. All States and UTs are covered under MIDH.

The other steps taken by farmers to enhance the income of farmers are as under:

(i) The Government has drafted a new model Agricultural Produce and Livestock Marketing (Promotion & Facilitation) Act, 2017, which was released on 24 April 2017 for adoption by the States through legislation of their respective Acts. The Act provides the options of alternate markets beyond the existing APMC regulated market yards including private markets, direct marketing, farmer-consumer markets, special commodity markets, declaring warehouses/silos/cold storages or such structures as market sub yards and Market Yards of National Importance (MNI) so as to reduce the number of intermediaries between producer and buyer and increase the share of the farmer in consumer’s rupee.

(ii) The Government undertakes procurement of wheat and paddy under its ‘MSP operations’.

(iii) MSP is notified for both Kharif & Rabi crops based on the recommendations of the Commission on Agriculture Costs & Prices (CACP).

Government led other market interventions such as Price Stabilization Fund and Food Corporation of India operations also supplement efforts to enhance the income of farmers. Government is also focusing on ancillary activities like Bee-keeping for increasing of farmers’ income.

This information was given by the Minister of State for Agriculture & Farmers Welfare, Shri Parshottam Rupala, in reply to a question in Lok Sabhaon July 25.