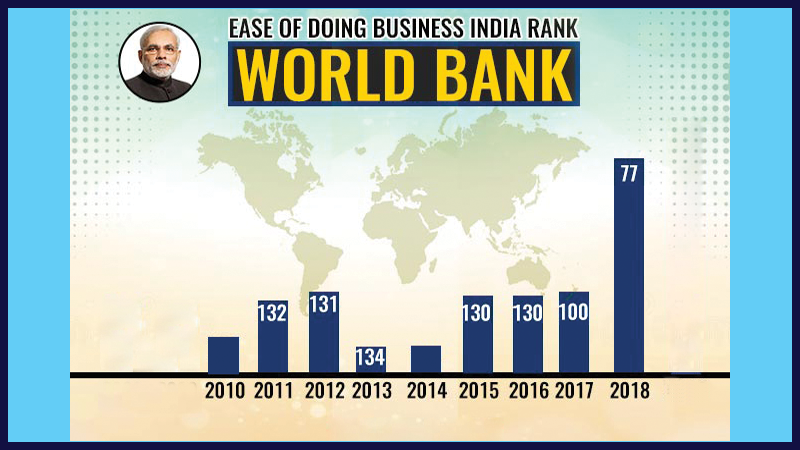 India improved its ranking on the World Bank’s ‘Ease of doing Business’ report for the second consecutive year, jumping 23 places to the 77th position on the back of reforms related to insolvency, taxation and other areas.

India was ranked 100th in the World Bank’s Doing Business report last year. The ranking comes as a shot in the arm for the Modi Government at the Centre ahead of the general elections next year.

In its annual “Doing Business” 2019 report, released on 31 October, 2018 World Bank said India improved its rank on six out of the 10 parameters relating to starting and doing business in a country.

These parameters include ease of starting a business, construction permits, getting electricity, getting credit, paying taxes, trade across borders, enforcing contracts and resolving insolvency.

India was ranked at the 142nd position among 190 nations when the Modi government came to power in 2014. It rose to the 100th spot in the last ranking from 131st rank in the previous year. New Zealand tops the list of 190 countries in ease of doing business, followed by Singapore, Denmark, and Hong Kong.

The United States is placed eight and China has been ranked 46th. Neighboring Pakistan is placed at 136. World Bank put India among the top 10 economies to make the most improvements.

India, it said, made starting a business easier by integrating multiple application forms into a general incorporation form. “India also replaced the value-added tax with the GST for which the registration process is faster,” it said. Also, “India made paying taxes easier by replacing many indirect taxes with a single indirect tax, the GST, for the entire country.

Stating that a well-designed insolvency framework is a vital determinant of debt recovery, it said the establishment of debt recovery tribunals in India “reduced non-performing loans by 28 per cent and lowered interest rates on larger loans, suggesting that faster processing of debt recovery cases cut the cost of credit.”
Further, India reduced the time and cost of export and import through various initiatives, including the implementation of electronic sealing of containers, the upgrading of port infrastructure and allowing electronic submission of supporting documents with digital signatures, it said.

World Bank said India has further streamlined the process of obtaining a building permit and made it faster and less expensive to obtain a construction permit. It also improved building quality control by introducing decennial liability and insurance.

A Commerce and Industry Ministry statement in New Delhi said, “India’s leap of 23 ranks in the ease of doing business ranking is significant considering that last year India has improved its ranking by 30 places, a rare feat for any large country of the size of India.”