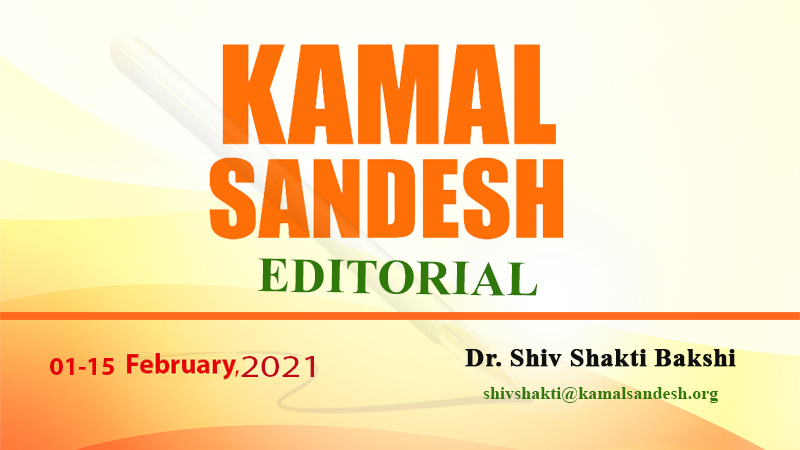 As India intensified its fight against Covid-19 pandemic by launching world’s largest vaccination programme, encouraging trend of lowering Covid-19 cases is further strengthening the united spirit of the nation. While even the most developed countries in the world had to face extremely challenging times, India under the dynamic and visionary leadership of Prime Minister Shri Narendra Modi responded with alacrity restraining the pandemic impact to the minimum on almost every parameters. Today, when Prime Minister Shri Narendra Modi has rolled out world’s largest Covid-19 vaccination programme with two ‘Made in India vaccines’, it has raised hopes across the globe with many countries looking up to India with expectations. As the Prime Minister has repeatedly emphasised on the India’s mantra of ‘Vasudhaiv Kutumbakam’ and the belief of India in the ancient dictum of ‘Sarve Bhavantu Sukhinah, Sarve Santu Niramayah’, the nation has come forward to help other countries in their fight against the pandemic.

Last one year was extremely trying for the entire world and India also had to face numerous challenges due to Covid-19 pandemic. While the entire nation under the strong and determined leadership of Prime Minister Shri Narendra Modi remained united facing all the challenges, BJP as a political party became an example of dedication and commitment to be emulated across the globe. Amid such challenging times, BJP National President Shri Jagat Prakash Nadda completed one year in his office taking the organization on the path of untiring service. It was under the inspiration of Prime Minister Shri Narendra Modi and under the guidance of BJP National President Shri Jagat Prakash Nadda that crores of BJP karykartas committed to the mantra of ‘Seva Hi Sangathan’ reached out to crores of people and stood by their side in the time of dire need and distress. Whether it was the distribution of ration kits, distribution of masks and sanitizers, serving the old and Covid infected patients or enhancing the morale of Corona warriors by conducting campaigns in their support, BJP karykartas remained committed to serve the people and provided relief to the needy during pandemic. It was the dedicated service of the crores of BJP karyakartas which was blessed by the people across India in various elections held during this period. In a letter addressed to crores of BJP Karykartas on completion of one year in office, BJP National President Shri Jagat Prakash Nadda has lavishly praised the untiring efforts of the karykartas during pandemic and exhorted them to continue to work towards the realization of the higher goals of the party.

While the scientists, researchers and experts have made India proud by producing ‘Made in India’ vaccines within such a limited time, it is highly unfortunate to note that there are a handful of people who are feeling uncomfortable with such a huge national achievements. These are the same set of people who even doubted India’s capabilities in manufacturing masks and sanitizers and are now silent when India has become an exporter of masks, sanitizers, PPE kits, medical equipments, medicines while equipping its health facilities with ‘Made in India’ ventilators. They had never imagined that India can ever make vaccines too but it was the relentless efforts of Prime Minister Shri Narendra Modi who continuously reviewed the progress and supported the efforts of scientists, researchers and experts that India is today one of the proud manufacturer of Covid-19 vaccines. It is highly unfortunate to note that Congress leaders always tried to demoralize the nation during the pandemic by raising baseless questions and by attempting to create an atmosphere of panic and pessimism. BJP National President Shri Jagat Prakash Nadda has completely exposed Rahul Gandhi by posing pointed questions which he failed to respond. In fact Congress and Rahul Gandhi have no answers, their falsehoods stand exposed and politics of dynasty and deceit has been defeated. India is marching ahead with the mantra of an ‘Aatmnirbhar Bharat’.