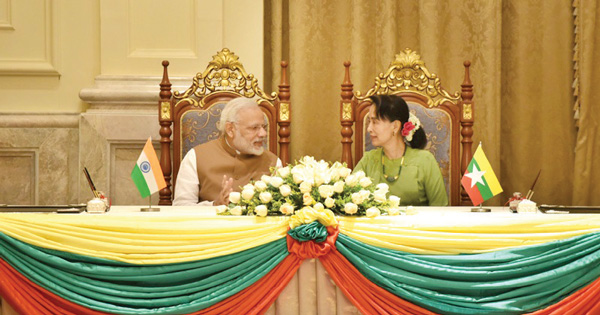 After attending BRICS summit Prime Minister Shri Narendra Modi reached at Naypyidaw on September 5 for a two-day trip to Myanmar, It was his first bilateral visit to the country. Myanmar is India’s gateway to the East.

Prime Minister Modi was accorded a ceremonial welcome at the Presidential Palace in Nay Pyi Taw on 5th September 2017. He paid a courtesy call on the President of Myanmar, who hosted a State Banquet in his honour. On 6th September 2017, the Indian delegation led by Prime Minister Modi held bilateral talks with the Myanmar delegation led by State Counsellor Daw Aung San Suu Kyi. The talks were held in a warm, cordial and constructive atmosphere as befits the close and friendly relations between the two countries. Thereafter, the State Counsellor and the Indian Prime Minister witnessed the signing and exchange of various documents between Myanmar and India in the areas of health, culture, capacity building, maritime security and collaboration between key institutions and held a Joint Press Conference.

During the talks, the two leaders reviewed developments since the very successful State visits of the President and the State Counsellor of Myanmar to India in August and October 2016 respectively. They reviewed ongoing official exchanges, economic, trade and cultural ties, as well as people-to-people exchanges that reflect the harmony between Myanmar’s independent, active and non-aligned foreign policy and India’s pragmatic Act East and Neighbourhood First policies. They pledged to pursue new opportunities to further deepen and broaden bilateral relations for the mutual benefit of the people of both countries. They reaffirmed their common aspirations for peace, collective prosperity and development of the region and beyond.
The Prime Minister of India appreciated the measures taken by the Government of Myanmar towards peace and national reconciliation and commended the on-going peace process of the Government of Myanmar. He noted that peace and stability in Myanmar are of the highest priority to India and reiterated India’s continued support to the Government of Myanmar in consolidating democratic institutions in Myanmar and for the emergence of a democratic Federal Republic.

The two leaders discussed the security situation prevailing along their borders and expressed concern at various incidents of terrorism and extremist-inspired violence that have taken place in their respective territories. Recognizing that terrorism remains one of the most significant threats to peace and stability in the region, both sides condemned terrorism in all its forms and manifestations and agreed that the fight against terrorism should target not only terrorists, terror organisations and networks, but also identify, hold accountable and take strong measures against States and entities that encourage, support or finance terrorism, provide sanctuary to terrorists and terror groups, and falsely extol their virtues. Myanmar condemned the recent barbaric terror attacks during the Amarnath Yatra in India as also various acts of terror perpetrated by terrorists from across the borders. India condemned the recent terrorist attacks in northern Rakhine State, wherein several members of the Myanmar security forces lost their lives. Both sides agreed that terrorism violates human rights and there should, therefore, be no glorification of terrorists as martyrs. They called on the international community to end selective and partial approaches to combating terrorism and, in this regard, jointly called for the expeditious finalization and adoption of a Comprehensive Convention on International Terrorism by the United Nations General Assembly.

Recognising that maintenance of security and stability along the common border is essential for the socio-economic development of the peoples of the border areas, Myanmar reaffirmed its respect of the sovereignty and territorial integrity of India and steadfastly upheld the policy of not allowing any insurgent group to utilise Myanmar’s soil to undertake hostile acts against the Indian Government. Myanmar also appreciated Government of India for upholding the same principle.

They also agreed to foster mutually beneficial and deeper defence cooperation between the two countries and, in this context, noted with satisfaction the recent successful visit of the Commander-in-Chief of the Defence Forces of Myanmar to India. Besides institutionalized cooperation through regular coordinated patrolling initiatives, they agreed to focus on bilateral maritime cooperation in non-traditional security domains, such as humanitarian assistance and disaster relief, which are critical for safeguarding the Bay of Bengal and the Indian Ocean as global commons.
The two sides shared the view that the situation in Rakhine State had a developmental as well as a security dimension.

In this context, they agreed to bring about overall socio-economic development in the State by undertaking both infrastructure and socio-economic projects, particularly in the spheres of education, health, agriculture and allied activities, agro-processing, community development, construction of small bridges, upgradation of roads, small power projects, livelihood activity, setting up of training centres, promotion of household crafts, conservation of environment and cultural heritage. Myanmar welcomed India’s offer of assistance under the Rakhine State Development Programme and the two sides agreed to finalize the implementation modalities within the next few months

Myanmar thanked India for supporting various projects in Myanmar that enhance bilateral as well as regional connectivity like the Kaladan Multi Modal Transit Transport Project and other road and bridge construction projects as fully funded grant-in-aid projects. Myanmar appreciated the substantial progress made on the Kaladan Multimodal Transit Transport Project with the completion of works on the Sittwe Port and the Paletwa Inland Water Transport Terminal and the handing over of six cargo barges to the Myanmar Port Authority and Inland Water Transport. The two sides agreed to enter into an MoU on appointing a port operator that may include both sides to be responsible for the operation and maintenance of the port in keeping with the practice that has been adopted at other international ports in Myanmar.

This would enable the Port and IWT infrastructure to be used commercially and promote development of the surrounding areas even as the final component of the project, the road from Paletwa to Zorinpui, is under construction. Both sides noted with satisfaction that work on the road was already underway and agreed to facilitate movement of project personnel, construction material and equipment across the border through Zorinpui and Paletwa. They also noted that construction work would shortly begin on reconstruction of bridges on the Tamu-Kyigone-Kalewa Road and on the Kalewa-Yargyi sector of the Trilateral Highway. The two sides have agreed upon the alignment of the Rih-Tedim road and the DPR for its construction. Further steps on construction of the Putao-Myitkyina and Alethankyaw-Ahungmaw roads under available LOC would be taken after DPRs are made available by Myanmar. In response to Myanmar’s request, India agreed to undertake preparation of DPRs for the Rihkhawdar-Zowkhathar bridge and the Bwaynu bridge.

India also expressed its readiness to extend technical as well as project-specific assistance to conventional as well as renewable energy-based power development projects identified by Government of Myanmar. The two sides noted the current level of bilateral trade and investment and agreed that, while robust, it has potential for growth. In this regard, they emphasized the need to improve market access by removing all trade barriers with a view to facilitate trade between the two countries. They expressed satisfaction with the conclusions reached at the 6th meeting of Myanmar-India Joint Trade Committee held in New Delhi, India in June, 2017 and agreed to continue holding of meetings on Border Trade Committee and Border Haats Committee.

Myanmar expressed deep appreciation to India for the decision taken by the Government of India to give Myanmar nationals gratis visa in all categories, except e-visa.

The Government of Myanmar thanked India for its decision to grant special pardon to 40 Myanmar nationals who are currently undergoing imprisonment in India for various crimes. This gesture was deeply appreciated by both the Government and the people of Myanmar, especially by the families of those who will be released from Indian jails.

India and Myanmar expressed firm commitment to set an example of good neighbourliness in the region. They emphasized that they must continue to progress together. They therefore agreed to promote shared interests of the peoples of the two countries so as to live together harmoniously and in a mutually beneficial inter-dependent environment.

Prime Minister Modi thanked the President of Myanmar for the warm and gracious hospitality extended to him and his delegation during their stay in Myanmar.